► Chapter One: The Exotic Amazon Parrot

► Chapter Two: A Home for Your Amazon Parrot

► Chapter Six: Can You Discipline an Amazon Parrot?

► Chapter Seven: Caring for Your Bird’s Health and Getting the Right Vet

Chapter One: The Exotic Amazon Parrot

One of the most popular bird pets is the parrot. Different species of parrots are kept as companions because of their unique, lovable characteristics: attractive colors, cute mannerisms, impressive intelligence and endearing way of interacting with their owners. A great diversity of this bird can be found in Australasia and South America. Usually, parrot species that are kept as human companions are those from the large breeds such as the amazon, cockatoo, macaw, grey, and eclectus. The most popular in this group is the Amazon Parrot. Amazon parrots originate from Central America, South America and the Caribbean Islands. Wil Amazon parrots can be found in palm groves, rainforests, scrub forests and savannas.

Young Amazon parrots usually sport a grey-brown iris. The color of their eyes change from red to chestnut brown/ red-orange after about 2 years. Once the color of their iris changes, you can’t identify its exact age. They mature sexually at about four to six years of age. However, it is difficult to tell the gender of the Amazon parrot as both female and male look alike. The breeding ability of Amazon parrots is very good, they are compatible with other parrots and they can lay 2 to 4 eggs with an incubation period of only 29 days.

An Amazon parrot typically weighs about 350 to 600 grams.  It normally eats seeds, nuts, fruits and even tiny insects. It has an average lifespan of 50 to 60 years. The longest an Amazon parrot has lived, on record, is more than 80 years! It is indeed a bird of longevity. And if you are looking to have one as a pet, you can have it for a very long time, even for the rest of your life!

Why Amazon Parrots are Popular

Amazon parrots love to explore as they are very curious birds with a high intelligence. They have the ability to acquire a large vocabulary and adapt to their environment. Amazon parrots are described as gregarious birds. They are very expressive, extroverted birds that love interaction. They are quite boisterous and playful. They love to strut and flash their tail feathers.  Amazon parrots are very vocal communicators that often enjoy singing. Often, these birds can be very noisy. At times, they can be aggressive and display destructive behavior. But once tamed, they can be very charming companion pets.

Amazon parrots are great at expressing themselves either through verbal communication or body language. Even though an Amazon parrot does not know enough words yet to verbalize its expressions, it can raise its head or neck feathers, pin its eyes, broaden its stance and fan its tail feathers to show excitement. It can also be a bit rowdy, and sometimes cute, as it would attempt to wrestle its owners hand using its beak, destroy its wooden toys or swing upside down.

They are amazing talkers and they love music. You will find many Amazon parrots singing their hearts out, as if the song originated from them! They like to make noises, especially to catch the attention of their owners—they can scream, make shrilling sounds, or make honk-like noises.

Amazon parrots are famous for their loyalty and show of affection. They love being with their owners and spending some quality time playing, talking, showing off and having fun. They are quite in demand as pets because they have excellent mimicking capabilities that endear them to many pet owners.

The downside to having Amazon parrots as pets include high maintenance, high cost, and a lot of time needed to provide a safe, comfortable and fun environment where these amazing creatures can thrive. When brought to the right home and to the right owner, they can be the greatest pets.

People seem to think that parrots can only echo and they cannot really communicate with people. There have been countless debates over this through the years. But research has shown that Amazon parrots can indeed understand and interpret the behavior of the one communicating to it, and give an appropriate response. When the parrot comprehends the context of the message it can create a message and send one back, either in the same language, or through its gestures. 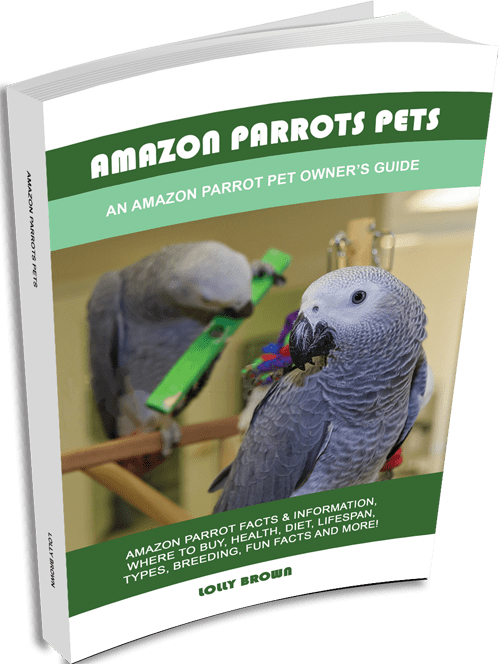