► Chapter Three: How to Acquire a Bird Eating Spider

► Chapter Four: Habitat Set Up for Your Bird Eating Spider

In many countries around the world, you can find lots of bird eating spiders for sale as house pets. This creature is becoming quite popular especially among spider hobbyists who already have prior experience of taking care of tarantulas. As amazing and fascinating as they are, bird eating spiders are not a good choice as pets especially for newbie owners or for young kids. This is because they are huge and they are very long and heavy with dangerous fangs and stinging venom. They are quite wild and having them as pets especially if you’re a first time keeper might not be a good idea.

Bird eating spiders are quite aggressive and can spell trouble if you don’t have an expert who’ll guide you. Nevertheless, if you’re as wild as these huge creatures are, and you’re interested in keeping them then this chapter will provide you with everything you need.

The IUCN or the International Union for Conservation of Nature hasn’t evaluated yet the current population of giant bird eating tarantulas. Although in the past, the population of these animals is relatively stable but from time to time it’s experiencing a constant threat to its survival, this is because many bird eating spiders are being captured for illegal pet trade. Capturing these aggressive bird eating spiders in the wild is very dangerous and difficult which is why pet traders usually risk themselves for getting stung by its venom but the reason that they do that is because whenever they catch one of these big spiders they can sell it for bigger profits. Adult female bird eating spiders can lay thousands of eggs in their lifetime that’s why they are being captured more than males.

Another threat to conservation of these species is deforestation and loss of habitat. In some countries, locals also hunt these animals because it has been part of their cuisine since ancient times. Even though the population right now is stable, zoologists are still saying that their population might get threatened and endangered in the future.

When it comes to licensing or getting permits, it is best that you acquire one since licensing systems aid in the protection of wildlife from aggressive exploitation as well as the negative impacts to exotic species such as the bird eating spiders in a particular region.

Acquiring licenses ensure that the populations of wild plants and animals remain viable. These licensing systems are also in place and should be heeded to help maintain in keeping, taking, using and transport of wildlife for recreational, commercial or other purposes under monitor. This is use to protect illegal collection of some species from the wild, as mentioned earlier, bird eating tarantulas have been harvested from the wild by illegal traders, and are said to be threatened by the wrath of mother nature. It is best to only acquire a bird eating tarantulas that have been bred in captivity to dissuade unscrupulous hunters from snatching them out of their lairs.

If you plan on acquiring one or more of these bird eating spiders, then you should check with your local animal or pet organization to determine if owning one would need licensure in your state or place of residence. Even if there are no state laws regarding pet spiders, it is highly advised that you check in your town or village if there are any rules because these might provide further regulations regarding pet spiders even when state law otherwise allows it.

How Many Bird Eating Spiders Should You Keep?

You must have sufficient space to house each one of the spiders, and you should be financially prepared and able to support and provide for all their needs. Ideally, you should house your pets in separate encasements to avoid attacks, fights and the potential to prey on one another. Most tarantulas like the bird eating spiders are predators by nature, and taming them from eating their own kind can be next to impossible because it is in their nature to prey on different species even their own kind. You as a keeper should also ensure that you monitor all of them and provide them with enough attention in terms of food and husbandry.

If you really are aiming to keep more than one bird eating spider or any kind of spider for that matter, make sure you have assigned specific enclosures for each of them.  Regardless of what information you may 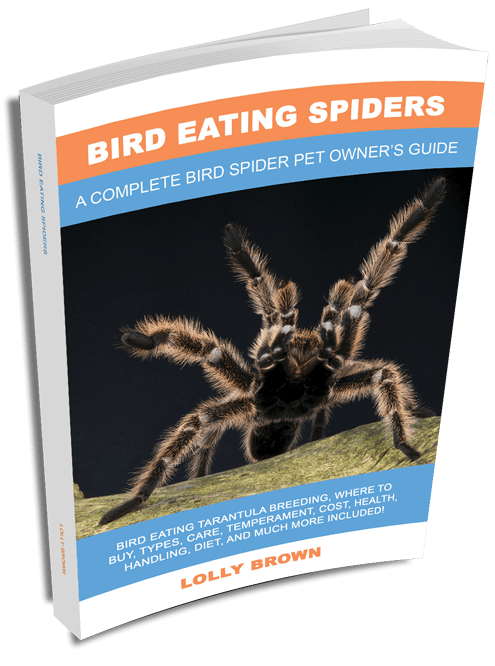