This chapter begins your in depth research on the Chinese Water Dragon as you start your quest on learning all about your desired reptile pet. To help you get ready for what promises to be an unforgettable milestone meeting, allow us to shed light on comprehensive facts about the Chinese water dragon and everything you would need to know about this usually jolly, green reptile, in preparation for a fitting homecoming welcome. This proactive step of learning is a smart way to start a promisingly fruitful friendship.

Getting to know the originations of your pet and how it lives in its natural habitat gives you, as its future keeper, an advantage of understanding the biological makeup of the Chinese water dragon allowing you to recognize and identify details that may be missed by an uninformed would-be keeper.

What are Chinese Water Dragons?

Meet this bright green fella of the reptile kingdom, which has captured many hobbyists and reptile enthusiasts’ hearts – The Chinese Water Dragon, also scientifically known as Physignathus cocincinus.

Water dragons are arboreal tree huggers who enjoy spending a good part of their time flanked with trees, bushes and greenery. This bit of dragon fact makes them skilled climbers, leapers and jumpers. Dragons thrive best and typically prefer hanging around areas where the average level of humidity ranges around 80 percent during mornings and around 60 percent during evening with temperatures averaging somewhere between 75 to 85 degrees Fahrenheit.

Their common name gives clue that water dragons like spending an equally good chunk of their lives in water hence they gravitate where small bodies of water are permanent and constant. Dragons may have found the perfect nirvana amidst rainforests, swampy marsh lands, beside ponds, by lake sides, and on river banks where home and territory is established.

Did I mention that they are pretty fine swimmers too? Well, they are. As fast and as graceful as these daredevils use their well-developed feet to scamper off branches and leap into water below indicate of its equally magnificent swimming abilities. Water dragons possess a seemingly endless list of talents, abilities and features, which we shall enumerate and describe in detail as we go along.

The water dragon and its kin can be found near the water channels of Cambodia, Laos, Vietnam, Thailand and Southern China. These brightly hued reptiles prefer to stay close to streams and lakes in the rainforests of Southeast Asia.

Reportedly an extremely pleasant reptile to care for by some, said to be feisty and tempestuous by others, expect keeper experiences living with their water dragon to be worlds apart. If you think about it, just like humans, they too are unique individuals. One thing that most keepers probably agree with is that Chinese water dragons are undoubtedly an attractive water dragon specimen sporting its full green body armor with interesting shocks of bright colors which starkly contrast its green physique.

As teeny hatchlings, they come scampering out into the world at an impressive length of 5 to 6 inches from snout to tail tip! On the top surface of its body is painted by nature with a brownish green color. Its abdominal parts are a pale green that recedes to chalk white. On the sides of the length of its body run light stripes of either beige or white, giving it an appearance of a classic American car with streaks of lightning. It’s long tail, which it uses to defend itself or at the very least swish sharply to show displeasure, is banded with colors of green and brown. A short snout with huge, large eyes on the sides of its head completes the impressive appearance of the Chinese Water Dragon.

As the water dragon grows it will shed its skin a few times. When it comes to about 10 inches in length a magnificent transformation happens to it. The upper body of the water dragon color morphs into a bright, brilliant green color subtly ranging from a soft mint green, a calm turquoise to a bold aqua. You will learn that the color play doesn’t end there, if you read on.

Both juvenile and adult Chinese water dragons have hued throats of colors that starkly contrast its predominantly green body. The color of its neck is delivered by nature, on a timely schedule, in a hue-range of faint yellow, an orange sunset, a sunrise peach, bright pink, hot fuchsia to a rich, deep purple.

The triangular head of the Chinese water dragon gets pretty large as it grows. Big round scales run along the bottom of its mouth and sharply tapers off ending with pointed scales on each side just where its neck and head converge. A dark strip of line hugs the corners of the water dragon’s eyes leading up to end at the ears.

It has a wide, thick, tongue which has a sticky surface and a fork tipped end, two features of its tongue that comes in handy when capturing and fastening onto prey. Chinese water dragons have small pointed teeth which they not only use to dine on an omnivorous diet but also to bite with on occasion.

Adult females and males both have properly-developed nuchal crests, which are a fancy way of describing horny thorns, just above their necks with the male’s thorns raised higher and notably longer than those of the females. Male Chinese water dragons have quite a unique feature; a mid-sagittal crest, set between its eyes and located directly at the top of its large triangular head; this is one reptile who truly DOES HAVE a third eye! The parietal eye is believed to help water dragons (and other equally unique reptiles) sense light in its varying degrees in order to thermoregulate. The mid sagittal crest helps the water dragon decide on a suitable basking spot, and alternatively, sense waning light giving it cue to seek shelter for the night.

They have strong and muscular legs with their front legs notably more slender compared to the chunky pair that carry their hind. Its front legs are perfect to use like hands when climbing, using them to grab onto branches whilst their powerful back legs kick-hoist their weight up. Their strong back legs are great tools for jumping on and leaping off objects they clamber onto. All four feet of the Chinese water dragon has five toes with all four middle toes longer than the rest. 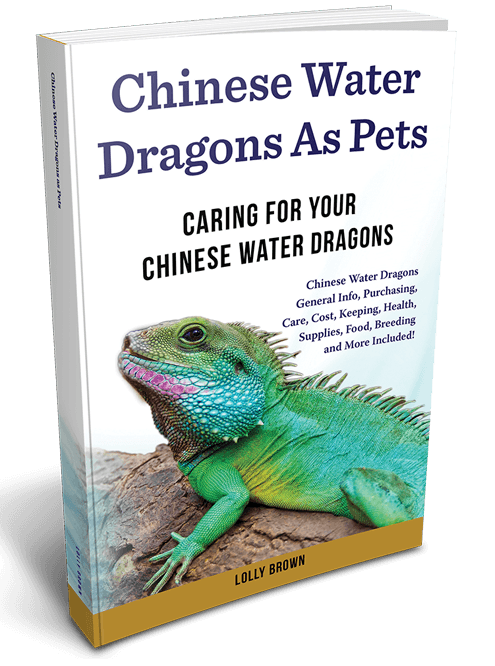