Cockatoos often referred as “cacato,” “crockadore,” “cokato,” “cocatore,” and “cocatoo” especially during the 18th century, are very enchanting birds to care for that comes in various sizes and colors. These birds are also considered as one of the most famous parrots. Cockatoos are very ideal pets especially for first time bird owners. But before getting a fascinating parrot as your pet, it’s very important that you know what it is inside out! Like many other things, you need to have proper knowledge and invest a significant amount of time to truly study and understand where these birds are coming from.

That is how you will determine if this kind of pet is the right choice, so that you know what you are dealing with.

On the next sections, you’ll be introduced to the smartest and one of the most popular parrots in the world. Prepare to meet Cockatoos!

Cockatoos, which are scientifically under the Subfamily of Cacatuinae, are birds that are native to shrublands, woodlands, rainforests and alpine forests in Australia, Indonesia, Papua New Guinea and Philippines. These birds life expectancy is about 30 – 60 years or more!

These birds have an enthusiastic and sociable attitude towards people, which makes them an interesting choice as pets.

These parrots had been popular since the 17th century especially when scientists brought it to Europe.

In the wild, Cockatoos are relatively medium to large birds with variety of colorful feathers such as white, pink, grey, yellow, black, and because of color mutations they are now available in cinnamon, silver, and grey and white with flashes of other colors.

Aside from talking, they are also fond of chewing, napping and playing interesting games to keep them from being bored and also to satisfy their curious minds. They are totally cool and have a knack for a fun time!

Most Cockatoos are generally easy to train and can be well-behaved as long as you provide them with adequate attention, interaction, and love. They can easily become part of the family and a loving companion if you are willing to put in the time and effort to take care of them.

Cockatoos have relatively the same features with other parrot species. These birds have short legs, strong claws and a waddling gait including a curved beak shape and a zygodactyl foot. The Cockatoos species have different erectile crest and they have strong large bills with a less brightly colored plumage.

In terms of their behavior and personality, they are quite notorious for screaming out loud and they are very noisy. They will destroy and chew on any objects available, requires lots of interaction and can be quite aggressive to unfamiliar faces. But they are primarily easy to tame and train and they are very friendly once they get to know you.

These parrots are omnivorous and usually feed on seeds, insects, fruit and nuts. Cockatoos are not sexually dimorphic; they need to undergo through DNA sexing to determine their gender, although some bird enthusiasts claims that they can determine a female cockatoo through their eye iris.

In terms of reproduction, Cockatoos reach their sexual maturity around 3 to 5 years old and breeding period usually occurs between August and January; females’ clutch size ranges from an average of 2 – 3 eggs and incubation lasts for about 25 – 30 days.

Just like any parrots, Cockatoos can be trained to mimic human speech and imitate other sounds by using their bifurcated trachea, which are equivalent to vocal cords in humans.

Cockatoos was discovered and acquired by European sailors around 1850 from Indonesia and other eastern countries that they had explored like Philippines, Papua New Guinea, and the Solomon Islands. Cockatoos had been kept as pets by natives of these regions as well.

Also during the 1800’s, sailors or explorers not just brought alive cockatoos back in Europe but also dead specimens of other parrots for scientists and collectors to examine.

In 1900 birds became very popular and a common pet by Europeans particularly the aristocrats at the time. All of these pets were imported from the wild. Scientists and bird enthusiasts were fascinated by these colorful creatures and some Europeans also started learning how to breed parrots like Cockatoos, later on they also learned how to create different color mutations that are now almost applicable in every parrot species.

In 1985 the first Cockatoos were captive bred in the Netherlands. During that time, significant milestones in terms of breeding Cockatoos were achieved especially in the United States and United Kingdom.

Around 1995, Cockatoos became popular as ever; almost all cockatoos are now captive bred. Several wildlife organizations and group efforts aimed in protecting the cockatoo populations in the wild have been established and government laws also protect the birds from importing diseases. As of now, it is illegal to import certain cockatoo species according to CITES appendix.

Today, the bird continues to be a very popular pet, people actually prefer buying baby cockatoos now than adult ones, and because of that, the amount of unwanted adult cockatoos is growing. Cockatoos are perfect for families with children and a very gorgeous cuddly companion that you can count on. 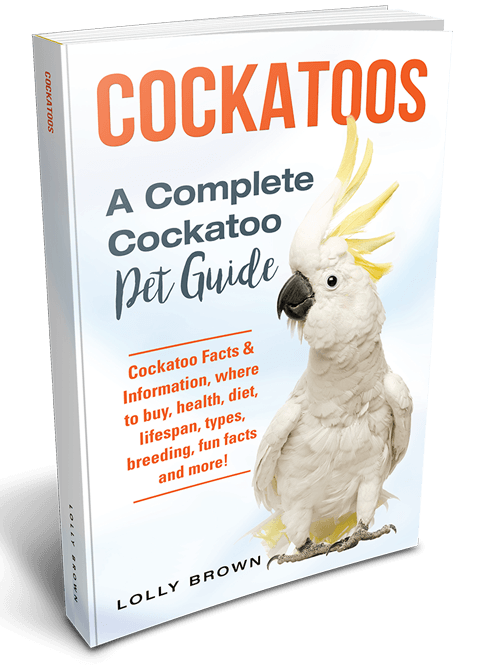