The great thing about Conures is that they have huge personalities wrapped in a small package! They are very enchanting birds to care for and very low maintenance at the same time. Conures are very ideal pets especially for first time bird owners. But before getting a fascinating parrot as your pet, it’s very important that you know what it is inside out! Like many other things, you need to have proper knowledge and invest a significant amount of time to truly study and understand where these birds are coming from. That is how you will determine if this kind of pet is the right choice, so that you know what you are dealing with.

On the next sections, you’ll be introduced to the friendliest and one of the most energetic parrots in the world. Prepare to meet conures!

Conures, which are scientifically under the Subfamily of Arinae, are birds that are native to Latin America, Central and South America, Mexico and even in the Caribbean. These birds life expectancy is about 20 – 40 years!

They are relatively small parrots with a funny sociable attitude towards people, which makes them an interesting choice as pets.

These parrots had been popular since the 18th century especially in Latin America and Southern Chile.

Mostly conures are small in size but there are also medium- sized species. They have fluffy colorful feathers that also come in an array of different colors like red, lavish green, orange, white, vibrant yellow, and brown. Different variations of hybrid conures also exist, mainly for pet trade

Even if these birds are miniature, they have a reputation of being the loudest and love to screech big time, but the advantage of this is that they can be quickly taught to speak and perform cool tricks.

Aside from screaming, they are also fond of chewing and playing interesting games to keep them from being bored and also to satisfy their curious minds. They are totally witty and have a knack for a fun time!

Most Conures are generally easy to train and can be well-behaved as long as you provide them with adequate attention, interaction, and love. They can easily become part of the family and a loving companion if you are willing to put in the time and effort to take care of them.

Conures can be easily identified because they have slender bodies, flared tails with narrow tips and heavy or light-colored beaks with broad ceres and super-fluffy feathers which make them really look cuddly and cute.

In terms of their behavior and personality, they are quite notorious for having sharp screeching noise and bold attitude in everything. They will destroy and chew on any objects available, requires lots of interaction and at times nippy to unfamiliar faces. But they are primarily easy to tame and very friendly once they get to know you.

These parrots are omnivorous and usually feed on seeds, insects, fruit and nuts. Conures are not sexually dimorphic; the gender can only be determined through DNA sexing, they are also monogamous when choosing mates.

In terms of reproduction, conures reach their sexual maturity as early as 2 years old and breeding period usually occurs during spring; females’ clutch size ranges from an average of 2 – 5 eggs and incubation lasts for about 23 – 27 days.

Just like any parrots, conures can be trained to mimic human speech and imitate other sounds by using their bifurcated trachea, which are equivalent to vocal cords in humans.

There had been different citations of conures in literature particularly during the 18th century at around 1724. Father Jean B. Labat, a priest and missionary from France, once described a bird from the island of Guadeloupe called Aratinga labati, in which most people believed that he kept this bird as a pet. 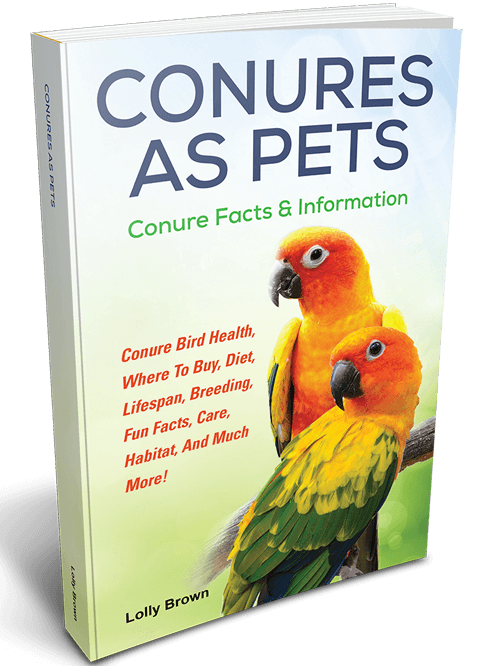