► Part 3 – Caring for Your Dwarf Hamster

The name “Dwarf” Hamster clearly implies that these pet rodents are smaller than a normal hamster, but by how much?

On average, a Dwarf Hamster is about 50% smaller than his larger kin. All varieties are playful, good-natured, and exceptionally active — to the point that some are quite difficult to handle.

While it is often assumed that a hamster is a “perfect” pet for a child, I would caution you from the beginning not to regard a Dwarf Hamster in that light. Although incredibly cute and fascinating to watch, this type of hamster is often better suited for older children (age 9-12 and above) and adults.

How Do Hamsters Differ from Rats and Mice?

Rodents make up about 40% of the earth’s population of mammals. They are present on every continent except Antarctica. This very large family includes squirrels, porcupines, and beavers as well as rats, mice, and hamsters.

In the world of mammals, rodents stand apart for their distinctive teeth. The upper and lower incisors are perfectly designed for gnawing, and continue to grow throughout the creature’s life to compensate for this constant wear.

All rodents break their food down with their teeth and also chew through dense materials to construct their homes. Even the smallest rodent can use his teeth effectively as a means of defense, inflicting serious and painful bites.

I remember watching in horror as an associate of mine annoyed the hamster she was displaying to a group of kids gathered for a summer day camp at the zoo. As Ruth talked, the hamster began to gnaw determinedly at the web of her hand.

Showing far more composure than I could have displayed, she very calmly said, “Well, he doesn’t seem happy, so let’s put him back in his cage, shall we?” By that time blood was dripping off her hand, alarming the children and the adults present in equal degrees!

Two hours and three stitches later, she was back at work at the zoo, but watching that incident gave me a healthy appreciation for the power of rodent teeth!

Any time you are attempting to distinguish one rodent from another, the only real determining features are size and body conformation.

Hamsters have larger bodies and shorter tails than either mice or rats, although a dwarf hamster and a mouse will be roughly the same size. Hamsters also have pouches in their cheeks to store food, which is not the case with rats and mice.

Why Choose a Dwarf Hamster?

About 90% of hamsters kept as pets are golden or Syrian hamsters. Dwarf Hamsters, at roughly half their size, are more like mice and require much smaller habitats, but is that the only reason to choose a Dwarf Hamster over the highly popular golden hamster? No.

Dwarf Hamsters are, on a whole, more social than goldens and tend to live more successfully in pairs. Goldens must live separately unless you are planning to breed your pets or house in large groups.

Dwarf Hamsters also have a longer lifespan than goldens, living to an age of 2.5 to 3 years, while golden hamsters often die before the age of 2.

Beyond that, the care of both creatures is for all practical purposes identical except in terms of scale of habitat and furnishings.

History of the Dwarf Hamster

Various species of small hamsters have been recorded in Europe and Asia for centuries. One of the first to be documented and named as a “dwarf” per se was a species discovered by W.C. Campbell in Mongolia in 1902.

Toward the end of the 20th century, all types of dwarf hamsters became popular as companion and show animals. For this reason, it’s better to look at the popular types individually.

There are three varieties of Dwarf Hamsters and one species, the Chinese Hamster that is typically misidentified as a dwarf.

Technically Chinese Hamsters (Cricetulus griseus) are not dwarfs, but they are quite small, weighing just 30-45 grams. This species tends to be placed in the dwarf category, however, and are often sold in pairs in pet stores, which is not always a good idea.

Pairs of female Chinese Hamsters are prone to waging vicious fights and should never be housed together.

In truth, Chinese Hamsters of both genders can be so unpredictably aggressive with each other, that keeping solitary individuals is often the best option.

Breeders keep them in colonies, but under conditions sufficiently large for any territorial disputes to be worked out more effectively.

Unlike true Dwarf Hamsters, whose tails are small and relatively flat, the Chinese Hamster has a long, thin tail. Like most of their kind, this variety, although cordial and happily active, does love its privacy. Even when well tamed, they are shy and timid, preferring to create little secret dens where they like to hide.

There are three coat types with the Chinese Hamster: normal or wild, dominant spot, and black and white. The last type is quite rare and can usually only be obtained from a specialist breeder.

Chinese Dwarf Hamsters have a life span of 2.5-3 years, and females generally give birth to a litter of 4-6 pups after a gestation period of 21 days. This species is somewhat slow to mature, and females should not be bred before four months of age.

Typically Chinese Dwarf Hamsters are best housed in an aquarium since they can easily escape a wire cage.

Roborovski Dwarf (Phodopus roborovskii) hamsters are the smallest and fastest hamsters of all species and sizes. They measure less than 3 inches / 7.62 cm even when fully grown and weigh 20-25 grams.

The species is indigenous to the deserts of Russian and Kazakhstan and range into northern China. In the wild, they live on grain, fruit, vegetables, insects, and even tiny amounts of meat.

Because Roborovski Dwarf hamsters are hard to catch, hard to handle, and hard to tame, they are not ideal as pets for children. The nickname “Robo” is perfect for these little amusing dynamos, but they are really hamsters to watch, not to pick up and play with. 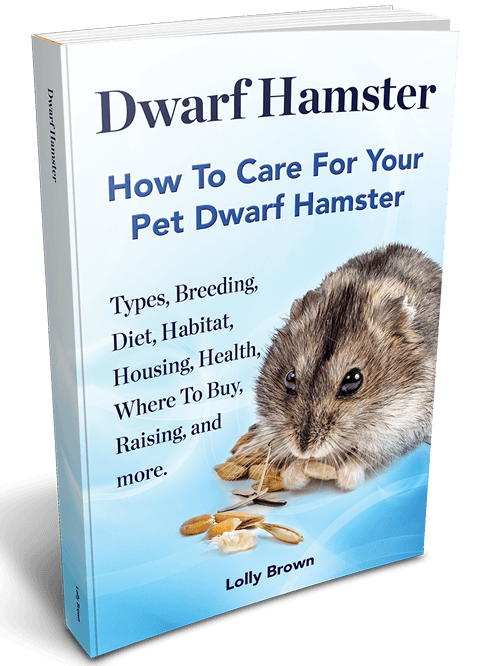