► Chapter Six: Food and Nutrition for Your Pet Ferret

Pets, people purchase or adopt them to have companionship in their lives. They might even have pets to have a great addition to their family. Most people prefer having cats or dogs as their household pets as they are very easy to take care of.

However, why not take the risk and discover some new kind of pet? Why not own a then hunter but now a cuddly little creature? Would not you be amazed when this little furry creature would creep up to you and cuddle you endlessly? And imagine, you could train this kind of pet to do almost any imagine tasks for a pet? If you want to own this pet, go out and get yourself a pet ferret!

Traditionally, your pet ferret is used as a hunter way before. Due to its primitive traits, it would go out and hunt rodents and rabbits. It is smart enough to sneak into small spaces and even tubes and formulate a way to capture the rabbit. Smart, right?

People often veer away from this kind of pet; however, we should always keep an open eye to new possibilities of having a ferret as your own household pet. This chapter will help you deal with everything you need about your pet ferret. We hope that you will enjoy this fun – filled journey of owning your very first pet ferret.

The next sections will give you a deep insight on the rich history as well as its basic usage from then and now.

Where do Ferrets Originated?

Our beloved ferret has been a great member of the household of humans for a thousand years now. In today’s society, they are considered to be the true companion or humans and they are greatly loved in the entire world.

This animal can breed and produce offspring with either of the aforementioned species of the polecat. Remember, the domesticated ferret is not the same as the black-footed ferret, also called as the Mustela nigripes, which resides in the western part of the Unites States. The latter kind of ferret was recently reclassified from extinct, but is now being reintroduced again through breeding programs.

There are still some talks over the specific specie of polecat in which the domesticated ferret actually belongs to. There are several studies performed to fully compare the coat color, behavior, and the skull structure among the three aforementioned species.

Also, there is a little trace of evidence which would tell us when these ferrets were domesticated, as well as how it travelled all the way to Europe. A reason for this little evidence might be due to their tiny bones, rapid decay, or the archaeologist might have treated the remains of these animals as insignificant and did not record any findings from these animals.

Some researchers argue that the ancestors of the modern day ferret actually came from the Northern Africa then were brought to Europe through the Norman and the Roman invasions. Many people also believe that the promulgation of ferrets in Europe was due to the widespread of the rabbits that they have hunted.

There are a lot of students done to show the difference in terms of behaviors of the ferrets and wild polecats. These studies are done to show that there is an alteration of the animal’s behavior.

Generally, the ferrets are less fearing to the man and show less fear to an unfamiliar environment unlike the polecats. Other than that, ferrets need a lot of time to get used to repetitive noise they have in their surroundings unlike the wild ferret. This is great evidence that there is a great retention of juvenile responses.

It is very worthwhile to note that if you have separated a wild polecat from its mother before it can open its eyes and then raise by a human, the polecat would be tamed and be imprinted to the human. The polecats would remain tame if there is a continued contact with humankind.

On the other hand, weasels and minks may become tame for short period of time if they are hand reared, but they would then go back to their fearful wild state after its maturity.

The aforementioned behavior, the one being hand-raised, may be the answer on why the ferrets should be domesticated as pets. 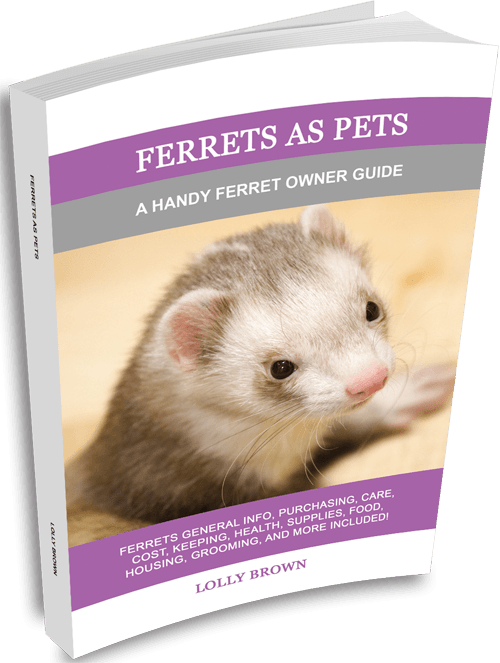