► Chapter One: Let’s Start With the Basics

► Chapter Four: Fact or Bluff? What to Believe?

► Chapter Five: What Will My Great Dane Eat? A Primer

Chapter One: Let’s Start With the Basics

The real ancestors of the Great Dane are still not known, but their close relatives have existed for a long time.

Historians have found drawings of dog in Egyptian monuments dating back to 3000 B.C. which greatly resembles the breed. Further, Chinese writers have written descriptions of dogs in 1121 B.C. It is believed that the Great Dane is a mix of the English Mastiff and Irish Wolfhound.

The Great Dane that we have now is more mature and peaceful in nature, unlike the original which was primarily bred for hunting wild European boars. They have power, tenacity, intelligence which is perfectly fit for the task as hunters.

The noblemen in Germany were astounded with this breed that they began to make them as their body guards, especially for their big estates.

In 1592, 600 packs of Great Danes were brought by the Duke of Braunschweig to hunt boars, it was reported that all of them were males. Germany declared the Great Dane as their national dog in 1876. Some groups called the breed as “Deutsche dogge”.

The Great Dane were introduced in the United States of America in the mid-1800s.

The Great Dane can be described as dignified, strong, and elegant. It is a large breed that has a well-formed, smooth, and powerful body. Further, we can describe the Great Dane as courageous, confident, never clumsy, and spirited.

Here are the other standards that the American Kennel Club has set for a good breed of a Great Dane:

Head – A Great Dane’s head is rectangular, distinguished, long, finely chiselled, and expressive especially under their eyes. When you look at them from their sides, the dog’s forehead must have a sharp set off starting from the nose bridge (also called as a stop).  The plane of the muzzle and the skull must parallel and straight to one another. The female’s head is more finely formed, while the male has a pronounced masculinity in it.

The body of the Great Dane has distinguished features that you need to look out for.

Neck – The dog’s neck should be high set, long, well arched, muscular but still firm. When starting from the nape, you can see a smooth yet gradual flow into their withers. The underline of the neck should be clean. There should not be a pronounced sternum but the fore chest must be well developed.

Forequarters – When viewed from the side, the forequarters must be muscular and strong. The Great Dane should have a strong, ring angled shoulder blades that is well articulated with its upper arm. The upper tip of the shoulder and the elbow joint should be perpendicular to one another. There must be a well – developed, securely attached, and firm hold of the ligaments, muscles, shoulder blades, and rib cage. The upper arm and shoulder blade needs to be the same length. There must be a slight slope in its strong pasterns. It is noticeable that the Great Dane’s feet are rounded and compacted with well-arched toes; no toes should be peeping out. Their nails must be strong, short, and very dark.

Coat – The Great Dane’s coat should be thick, clean, and short. It has a glossy appearance.

Eyes – A Great Dane, typically, has medium size, dark, deep set yet a lively and intelligent expression. They have relatively tight yet almond-shaped eyelids with well -developed brows. In the harlequin variety of Great Danes, the eyes should be dark. Light to different colored eyes is not really desirable.

Ears – The ears should be medium in size, moderately thick, high set yet folded near the cheek. The top line of the ear should be well – levelled with the skull. Some dogs have cropped ear, but remember that those ears should be proportionate to the head and ear size. The nose should be black, all other colors are undesirable.

Hindquarters – The Great Dane’s hindquarters should be muscular, well angulated, broad, and strong. The hock joins must be perfectly straight, especially when viewed from the rear. Its feet must be compact and round.

There are different variations of a Great Dane, such as: Mantle, Black, Fawn, Brindle, Blue, and Harlequin. Each type has its distinctive feature that sets them apart.

Mantle – the color must be white and black, further, it has a solid black blank all over its body. It has a white muzzle on its black skull.

Black – The overall color must be a glossy black. Any other markings are undesirable.

Fawn – In this variation, the color must be yellow gold with a black mask. The black markings should be appeared on the eyebrows and eye rims.

Brindle – The overall base color should be yellow gold with strong black cross stripes. It is preferable that it has black mask.

Blue – The body color must be pure steel blue. Any other colors are undesirable.

Harlequin – The dominant color must be pure white with patches of irregular black shapes. These patches must be well distributed throughout its body. 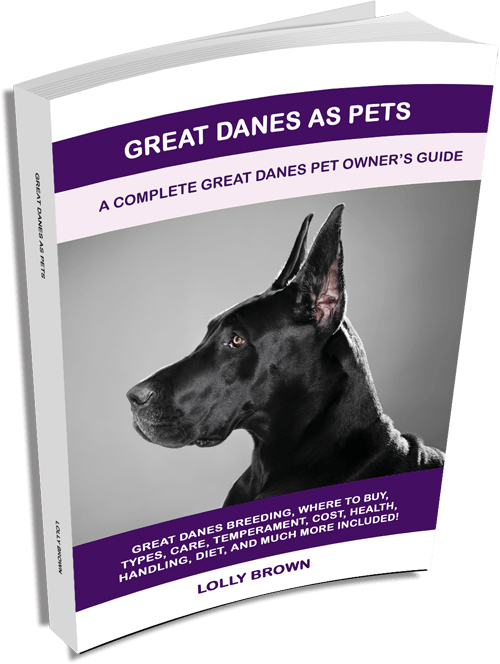