Chapter One: Pacman Frogs in Focus

Pacman frogs are scientifically known as Ceratophrys ornat. They come in many names including Ornate Horned frog, South American Horned frog, Argentine Horned frog, Ornate Pacman frog, and Argentine Wide-Mouthed frog. The name ‘Pacman’ is obviously what it’s popularly known for because its appearance and characteristic is very similar to the videogame game character. Pacman frogs belong to the Neobatrachia family, a new family that is formed under the order Anura species. These species come in a wide array of colors with different markings and combinations. They are generally large and have a very wide mouth.

Pacman frogs may seem like a very easy animal to handle, and although it’s suited for beginners, it may not be the right choice for everyone. Before you decide whether or not it might be the right pet for you and your family, you need to learn and invest a significant amount of time in getting to know these creatures especially for first time frog owners; this breed have a specialized husbandry requirements which may be difficult if you haven’t had any experience of handling any type of amphibian before.

In this chapter you will receive an introduction to the Pacman frogs breed including some basic facts, different types’ info, as well as the brief history of how it came about. These topics, in combination with the practical information about keeping frogs in the next chapters, will help you decide if this is the perfect pet companion for you.

Pacman frogs are very common in pet trade; these frogs are abundant in the wild, and can easily be purchased from many online breeders or vendors in various pet stores. Pacman frogs make great pets because of its captive – bred availability and low maintenance.

As mentioned earlier, they come in various colors that are all unique because of its special combination of markings. The most common colors for Pacman frogs are red, yellow, green, and dark brown with spots or bright markings on their skin.

In terms of size, female Pacman frogs are way larger than male Pacman species; this is perhaps because of mating reasons. Speaking of mating, males are known to produce croaking sounds while females could not (more on this topic in upcoming chapters). Adult females are usually about 6 – 7 inches or 15 cm while males only measure about 2 – 4 inches or 10 cm (still depends on the breed). The measurements both pertain to its length and wideness because Pacman frogs’ body structure is equally wide and long. These frogs can reach its adult size in about 1 – 2 years.

They have a large mouth because they love to eat. They gluttonously feed on various smaller creatures such as mice or rats. According to breeders and amphibian experts, Pacman frogs are always hungry and lazy – they do not move the whole day unless they needed to hunt for food. They are notorious for being lazy and have a huge passion for eating which is perhaps why they have large abdominal structure; they always would want to eat something that is even bigger than them – and if there’s no food available at the moment, you can find them just relaxing in dry patches somewhere.

Pacman frogs also sport a row of very sharp teeth – in fact; this is their unique feature because they are the only species of frogs that have teeth! These teeth are used to hold a captured prey. Ironically, this is also the cause of their death because they can’t let go of a prey sometimes that it suffocates them. Make sure to not feed something that is way larger than the size of your Pacman frog because it could be fatal.

In terms of behavior and handling, you should be aware that Pacman frogs can bite you especially when they feel threatened. Large Pacman frogs can puncture your hand and draw blood if you stick your finger or hands to them. Like any other amphibian or reptile pets for that matter, they are very sensitive creatures and they also have very delicate skin, which means that you shouldn’t touch them unless it is absolutely necessary.

They’re not like normal pets such as dogs and cats that you can pet anytime you feel like it. In terms of keeping them, you won’t have a problem in making a Pacman frog as a pet because they are not endangered species unlike other breeds of frog. Although you need to also check the rules or laws when it comes to keeping amphibians to make sure that you don’t get penalized. The laws vary depending on where you live – check the rules in your town, municipality or state. It’s better to have appropriate documents on hand just in case. We will discuss more about licensing later on in this book.

You should also be careful in terms of husbandry because if in case the substrate dries up or if food is scarce, the tendency is that Pacman frogs will encase itself in its thick outer skin so that it could protect them from drying out. They will usually appear dead because they won’t move at all. Once they are rehydrated they will shed their outer skin and eat it, make sure that you handle them properly to avoid any accidents.

Captive Pacman frogs can live up to 15 years or more if you properly care of them. Your Pacman frog can be a long – term commitment so make sure that you can handle it financially and also time – wise.

Pacman frogs are endemic which means that they are exclusively found in one place. These creatures are abundant in South America mostly in countries such as Brazil, Argentina and Uruguay. They are tropical species found in these countries, and their habitat is mostly moist forest floors. They are usually land dwellers or terrestrial, their primary weakness is swimming (unlike other frogs), they are mostly found just relaxing in a humid environment or in damp leaves. In the wild, they will eat anything that is within their reach or striking distance. As mentioned earlier, they mostly just wait on the ground and wait for their prey to come in.

Frog breeders today are continuously developing breeding techniques through the use of technology. In recent years, the availability of hybrid frogs became popular; these cross – breeding is also one of the reasons why frogs became quite popular as home pets. All the species can be crossbreed except the Amazon Horned Frog.

Just like other breeds, Pacman frogs also have different types this is because they are found in certain locations in the wilderness which gives these species a set of different characteristics. There are 8 types of Pacman frogs you can choose from, however, some of them may not be available in your area. Nevertheless, it’s better for you to also know about them because you’ll never know what you’re going to get.

In this section, you’ll learn about the different breeds of Pacman Frogs, they are as follows: 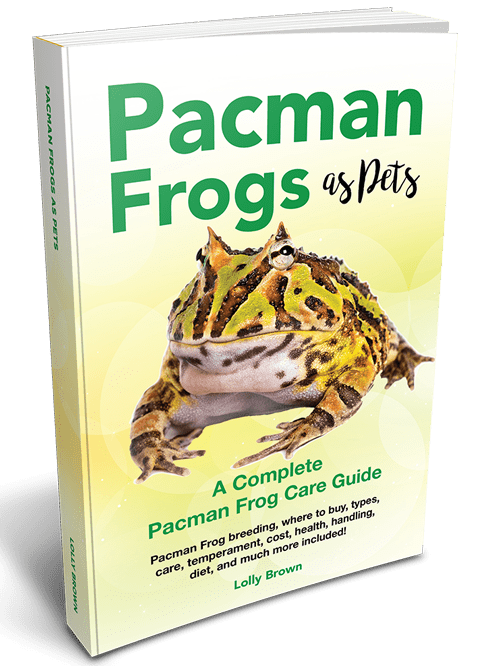