► Chapter One: A Closer Look at Pionus Birds

► Chapter Three: Species and Subspecies of the Pionus Parrots

Chapter Three: Species and Subspecies of the Pionus Parrots

We will be taking a detailed look at each of the Pionus parrot in this chapter to give you a wider range of their individuality and uniqueness. We aim to help you get to the matter of making a decision on which pionus parrot suits you best, would fit into your lifestyle and even give you a better understanding of each in case you are looking to expand your aviary. Get to know a little more about what they look like, their habitat in nature, when they breed and all the individual details of each pionus specie and sub specie giving lengthier details on the most popular pionus birds available and commonly found in the bird pet market.

Let’s take a better look at one of the most popular bird species of the Pionus parrots called the Blue-headed Pionus. This sought after parrot from the pinus genus is inquisitive, intelligent, and active. Even though the blue-headed pionus aren’t good at talking like most parrots in general, but they make up for this lack of chatter with their fun antics and friendly disposition.

The Blue-headed Pionus are naturally gentle birds and they could potentially turn into a very loyal pet, oftentimes fiercely bonding to their owner. For a beginning parrot owner, the blue-headed pionus are considered to be excellent birds, since they are typically quiet and calm. And because of this, they are also a great pet choice for those who live in apartments or dorms. The scientific name of the blue-headed parrot is Pionus menstruus with sub-species individually called the Pionus menstruus reichenowi and Pionus menstruus rubrigularis. They are birds native in Central America specifically in Costa Rica as well as South America, northern Bolivia and central Brazil. They are also found on Trinidad. They like to inhabit wooded forests as much as they like being in tropical zones.

A small to relatively medium sized species, the blue-headed Pionus has a charming characteristic and has the appearance similar to its other pionus cousins. The bird sports a green plumage and typically varies from the rest of the pionus because it has a bright blue colored – head, sleek black feathers and a splash of pink feathers on its throat.

The Blue-headed Pionus comes to its full colouration when it reaches maturity, and when it does its beautiful feathers has a shimmering quality to it. You will also notice a distinct difference in its fur color. Some appear to have a darkish blue splash of color on the head and a mute or stark pink color on its throat. The blue-headed pionus like all its cousins have bright feathers of red for its undertail. The bird’s beak is dark grey and transitions to red higher up toward its head, it also has dark brown eyes with a light grey colored on its eye ring, and their legs are pale greenish-grey. The young pionus have even paler bluish coloring on their heads as compared to the adults. They grow to a length of 11″ (28 cm). It is relatively a robust bird, but more susceptible to the infection aspergillosis than other species. Availability of this parrot is infrequent but is becoming more popular and many are known to be kept as pets.

The Pionus sordidus mindorensis or the Ecuadorian Sordid Parrots call the Mountains of western Ecuador home. The Ecuadorian Sordid Parrots’ head is a dull slate-blue in color with lores (areas between eyes and bill on the side of the bird’s head are red with black ear-coverts, edged with whitish feathers. It has chin feathers that is edged with dull pink and its back and wings are a dark brown color with pale edging on each feather. The breast and abdomen of the Ecuadorian is brown with dull pink sometimes bluish edging.

It has a violet-blue color on it’s under wing-coverts. It has a dark blue tail with outer feathers of a red base. Its bill is blackish, and horn-colored on the sides. The have brown iris and feet grey and measures in at a length of 10 in (26 cm). The Ecuadorian Sordid comes from the mountains of western Ecuador.

Columbian Sordid Parrot averages a length of 11 inches (28 cm). The Colombian Sordid parrot looks much like the parrot mentioned, described and featured above, but is overall a darker green in color without olive-brown markings on the back feathers. Its breast and abdomen is a uniform green, sans the bluish-pink edging. This parrot subspecies of the pionus is generally found in the regions of the Santa Marta Mountains in northern Columbia.

This Pionus sort appears quite plain when observed from a distance but like the Dusky Parrot; the Maximilian has a variety of soft colors that are stunningly beautiful when seen in full sunlight. It is also called the Scaly-headed Parrot because the feathers on its head have grey edges giving it a scaly appearance. They are found over the regions of eastern South America from north Brazil to Bolivia, Paraguay, and Argentina. They like to inhabit lowland forests and open woodlands.

The one who calls Surinam and Guyana their native habitat, the Dusky Pionus, has also gained better recognition and following largely because of captive breeding. Loved for their subdued hues that have an iridescent appearance under direct sunshine and its ability to pick up and retain teachings. They are very curious, smart and have very good memories. When they learn a trait like stepping up, they are quite obedient and will remain steadfast in their training. It has one of the nicest pet bird personalities and is an ideal pet for first-time parrot owners. They also make wonderful family pets because they can be handed by more than one person and still keep their sweet disposition. It makes for a suitable pet for those who dwell in apartments because you will hardly hear a peep from them that would cause alarm or a fuss.

The speckle-faced or the Plum-crowned pious has the same predominantly green body and red undertail vent much like the rest of the Pionus species. It also shares the bare eye rings the other Pionus sorts have as well. What set each of them apart from each other would be the subdued colors that are unique to each and that make them easily identifiable to the trained eye. The appearance of the plum-crowned parrot is a little more colorful than usual what with its head full of dark red feathers, highlighted at the tips with splashes of purple along with areas of white feathers (giving it the name speckle-face). The plum-crowned Pionus typically would have either a yellow or olive-colored bill or eyes of brown, its nape and back feathered in black. They are found to favor high-altitude parts as well as densely forested areas. When they do “speak” and make bird-call noises, the speckle-faced or plum-crowned Pionus emits a sound resembling or closely sounding like a laugh. 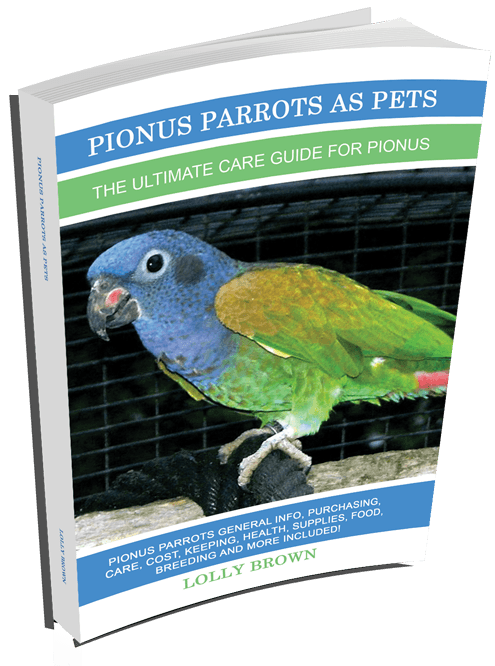