► Chapter 2: Things to Know Before Getting a Red-Eyed Tree Frog

► Chapter 6: The Life Cycle of a Red-eyed Tree Frog

Chapter 2: Things to Know Before Getting a Red-Eyed Tree Frog

The average lifespan of a Red-eyed Tree Frog is 5 -10 years, so if you are thinking of bringing one home, make sure that you are ready to make the commitment to care for your pet for the duration of its lifetime.

The good news is that these unique creatures are relatively low maintenance pets, though like with most other frogs and amphibians, they will require regular care.  You might not mind the brief daily interaction, feeding, and cage cleaning and maintenance that is involved, however, because you might never get tired of watching these visually stunning creatures.  And of course, the privilege of being able to watch the growth, development and transformation of a frog throughout its lifetime right within your own home is a small but not insignificant spectacle in itself.

There are certain considerations that you will have to factor in before bringing a Red-eyed Tree Frog home, and knowing where to buy one or how to take care of it isn’t the only thing to consider.  In this chapter, we take a look at the some of the basic aspects of what it means to keep a Red-eyed Tree Frog as a pet as a kind of overview of what the next 5-10 years will be like for you if you do decide that this is the pet for you.

Do You Need a License?

Certain countries require a special license for frogs or amphibians, and a violation of such special laws can mean heavy fines.  In the United States, licenses and permits for keeping pets, exotic or wild animals, and amphibians, are decided on the state level.  So whether or not you need a license to keep a Red-eyed Tree Frog depends on the area where you live, and the prevailing laws in your state, municipality, and town.

Be sure to check not just your state laws, but also your town and even neighborhood laws just in case.  It can happen that even when state law does not expressly prohibit the keeping of frogs as pets, your local neighborhood laws, or the laws in your local town or municipality may prohibit, restrict, or prescribe certain requirements before you can do so.  So before you even do all the legwork of researching the species and looking for where these frogs may be sold, check whether or not there are any legal impediments to your keeping one.  If a license or permit is required for keeping, transporting, purchasing, selling, and breeding amphibians such as the Red-eyed Tree Frogs, then of course you should do your best to comply.  Pay attention to any restrictions, limitations or requirements prescribed by your local laws.  This includes an almost universal prohibition against releasing captive pets into the wild.

In general, though, be aware that many territories at present prohibit the capture of wild frogs, or the trade or purchase of wild-caught frogs, to keep as pets – as opposed to the purchase, sale, and keeping of captive bred frogs.  This is in keeping with minimizing the risks of the spread of the Chytrid Fungus that has already ravaged many amphibian species populations in the world.

How Many Red-eyed Tree Frogs Should You Keep?

The choice of how many Red-eyed Tree Frogs to keep is a personal one, and you can certainly keep one or more if you want to and understand the commitment and responsibility that either choice entails.  In general, however, this is a communal frog, and you can easily house 3-4 of these calm and placid species in a standard 20-gallon terrarium.

While they may never be completely sociable with you as their owner and dislike being handled too much or too often, the Red-eyed Tree Frog is sociable enough with its own species.  Some would recommend one male to 2-3 females as a good ratio of a communal setup.

Do Red-eyed Tree Frogs Get Along with Other Pets?

The simplest and most practical answer to this question is to simply keep your Red-eyed Tree Frog isolated from all your other household pets.  This minimizes any “mistakes” or poor husbandry practices that might ultimately adversely affect your frog.

For one thing, when it comes to the more general run-of-the-mill household pets such as cats and dogs, the interaction may not prove to be a wholesome one.  Frogs are potential carriers of the Salmonella which, while it might not adversely affect them, can prove detrimental or even fatal to humans and other mammals.  And secondly, the natural exuberance and curiosity of some mammalian pets such as cats or dogs that are used to social interaction will only unduly stress your little frog – a creature that is not overly fond of being handled at all.  Too much stress on your frog is obviously not good, and it may eventually lead to the development of potential health conditions.

As to mixing different frog species, again, the smart thing to do would be to isolate each species, but in certain cases, mixing is possible.  It is assumed here that you have done your research and none of the frog species you are proposing to mix are known to be aggressive or territorial, and that you are not proposing to mix wild caught frogs with captive-breds.  It is further assumed that all of your frogs are in good health and have been duly checked by a professional veterinarian for possible diseases or bacteria they may be carrying.  Please remember that the current epidemic of Chytrid Fungus infecting frog populations all over the world is one of the strongest arguments against mixing different frog populations together.

Presuming that none of the considerations above apply in your case, the main considerations you are facing now in mixing different frog species is a question of the size and suitability of habitat.  Cramming frogs into a too-small enclosure does not make for healthy living conditions, since each species will need their own space.  In addition, frogs hailing from different regions will necessarily require different types of habitat – from substrate, temperature, humidity, water levels, and equipment requirements.  If these are not compatible, then do not mix your frogs.

Red-eyed Tree Frogs are also quite a gentle and fragile species, and there is no telling what might happen if you mix them with a different amphibian species in a confined area.  Try not to mix different frog species with widely diverse size ranges – a 2-3 inch Red-eyed Tree Frog, for example, with a far larger species.  Even if both species are gentle and placid by nature, there is simply no telling what might happen if you mix two different creatures in a confined environment.  And if the other frog is far larger and more muscular, you won’t have to guess which frog has the upper hand.  Predation among amphibians is not unheard of.  And even if your Red-eyed Tree Frog might not express its dissatisfaction eloquently – mixing species can be quite stressful for the involuntary inhabitants.

One other concern that most keepers express in arguing against mixing frog species together is the possibility of unexpected cross-breeding or hybrid frog mixes.  Hybridization is frowned upon within the frog-keeping community because it lowers the predictability of the type of care that the hybrid frog requires.

It is possible to mix different frog species together in the same habitat, but this is generally only done by keepers and hobbyists with years of experience, thorough knowledge of the frogs they are keeping, and enough money for the needed large enclosure.  If you are not sure about the suitability of the various factors that come into play when mixing two different species together, then it is best to err on the side of caution and simply keep different species in different tanks.

How Much Does it Cost to Keep a Red-eyed Tree Frog?

The cost of keeping and maintaining a pet frog is not very prohibitive – in fact, frogs are widely touted among pet owners for being low cost maintenance pets.   Perhaps the one biggest investment you will have to make for your Red-eyed Tree Frog is their habitat, which can cost anywhere from $20-250, depending on what you are looking for and how impressive you want your set up to be.

Being an exotic species, the Red-eyed Tree Frog is a bit higher up on the scale of prices for pet frogs, on the average costing about $70-100.  Aside from the food that you can purchase in bulk at your local pet store, and some funds set aside for emergency veterinary services, as long as you provide the proper environment or habitat, you and your frog are pretty much set.

During your first year, therefore, your cost expectations are quite moderate, and might look a little something like this:

The subsequent long-term costs after your initial year are relatively low, mainly centering on the purchase of food which generally consists of live crickets.  These are easily available at any pet store – a three-month supply can cost around $20 on the average.  The average yearly cost of food for your frog, therefore, is around $80, though it can easily be cheaper if you manage to find a good deal. 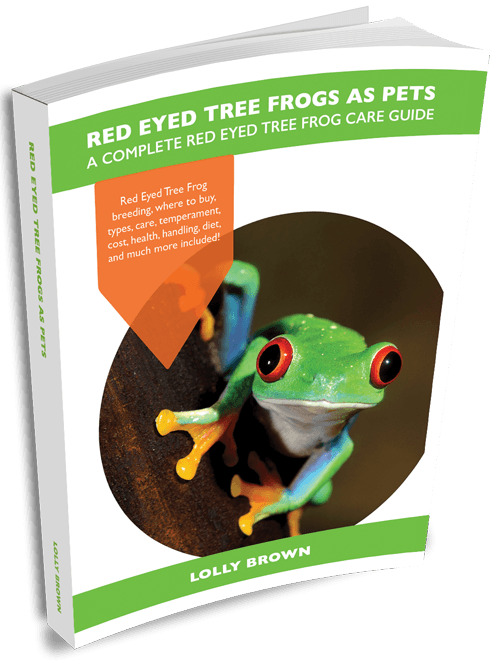