► Chapter Four: Supplies for Your Schnoodle

► Chapter Seven: Health and Wellness for Your Schnoodle

If you happen to be one of these “crater haters” or just a newbie keeper wondering what kind of cage/ craters are out in the market, this chapter will enlighten you and give you some advice on how to crate train your schnoodle pup.

Crate for Your Schnoodle

Before we get into the different types of crates that are available in the market today, we’ll first discuss the purpose and importance of why you need to buy a crate for your pet and hopefully ward you off of the misconceptions about the cage being ‘inhumane’ to dogs.

We, humans like the idea of having ‘space’ and ‘freedom.’ We tend to like a house with open floor plans, a huge backyard, or a property to roam around in for some reason but here’s the difference between humans and animals particularly with dogs; dogs are denning creatures. Ultimately, these pets like it when it’s ‘dark and close.’ It’s the same with cats, birds, spiders, and other creatures. You also have to understand that whether you buy your pet a crate or not, your schnoodle is most probably denning up one way or another. This is the reason why dogs like to sit or hang out below coffee tables or any tables for this matter, hangout under your desk, or hide under the blankets. This is also the reason why some dogs prefer to nestle in bolster beds and sleep under cushions or why they sleep under the chairs or under your couch, and even in your closet. Sure your schnoodle will tend to play outside and enjoy the wide space around but at the end of the day, they like to den up to whatever fashion they’re comfortable with in your house. Even if the schnoodle is a very sociable dog, they’d still want to have their own space or have that sense of privacy so to speak at some point, whether it’s between their keepers on the bed or lounging on their bed. Whenever you will leave your pet on a place somewhere in the house, say the kitchen or in the living room, you’ve created a den for them.

A crate is a soft and protective den that your dog can use whenever you’re not around to be with them. There are some dogs who don’t need crates but those are the outliers. Majority of dogs especially puppies will surely benefit from crate training and its useful function.

Contrary to some keepers, crates should never be used to punish a dog. Never lock them up inside the crate when you’re angry at them because it’ll only teach them to fear the crate which can affect your pet’s behavior and create problems in the long run.

Pros and Cons of Using Crates

Crates are useful especially if you’re raising a puppy or aiding a new adult dog to settle in their new environment. While your pet schnoodle is learning your house rules, using a crate can help you control destructive behaviors. These are some things you need to consider:

Even for those dogs that don’t need a crate, crate training is still essential because it could build up their character as you may need your dog to go to the crate at some point nonetheless. Say for example, they need a place to stay while you’re off somewhere or while waiting their turn at the groomers, they will need to spend time inside the crate. It’s also a safe option whenever you plan on bringing your schnoodle while travelling as it can be a familiar and reliable place inside the car for your dog, and you’re guaranteed that they won’t cause any distraction while you’re driving especially since schnoodles are quite active pets.

At home, it’s essential to have areas of inclusion and also confinement. You need to somehow control your pet’s stimulation and compartmentalize it in places you want. It’s quite irresponsible if you just leave it up to chance, and using a crate will help.

Do keep in mind that a crate shouldn’t be used for extended periods because it obviously doesn’t provide any outlet for your schnoodle’s high energy. If your dog is spending time in a crate then ensure that you counter that confinement by providing an outlet for physical exercise and mental stimulation.

A crate can be an effective management tool but it’s definitely not a substitute for a ‘baby – sitter.’ 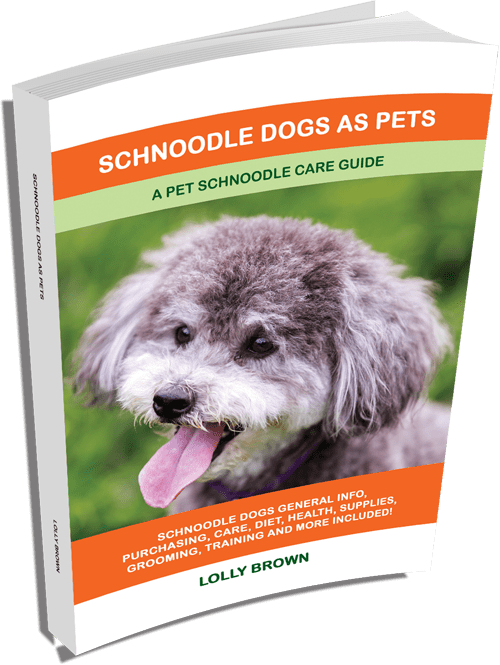