► Chapter 2: Things to Know Before Getting a Siberian Cat

It is always best to do your research before bringing any cat home.  Siberian cats, on the average, live for some 11-15 years, though there are reports of Siberians who have passed the 25 year mark!

This means that your Siberian kitten is going to be a part of your life for a very long time.  Such a personal investment on your part requires some forethought, the first of which is: Are you going to be able to give your Siberian cat the kind of life it needs and deserves?  In general, Siberians are pretty low maintenance cats, but they do need care, affection, and attention, and it is a poor cat owner who is at least not fully informed about the growing concern about feline diet and nutrition.  These are just some of the things that you will have to learn about if you are to bring a Siberian home.

This book contains much of the information you will need in deciding whether or not a Siberian is the right breed of cat for you.  But of course you cannot learn everything from a book, or from reading for that matter.  Much of what you will learn about your cat, your Siberian will teach you himself, over the course of the rest of his life.

There are a few things you should know about Siberian Forest Cats.  The first is that while they are generally low maintenance in terms of grooming, they have a crowning glory of abundant fur that comes in a waterpoof, triple coat, and this does require some attention.  The Siberian’s coat is comparatively low in allergens compared to other cats, but they do molt – at least twice a year.  So unless you have kept up with regular brushing and grooming, you’ll likely find yourself with a molting cat, hair everywhere, and a growing problem with matting and tangled fur.

The second is that Siberians are slow to mature.  It usually takes them up to five years before they are full growth.  This is a medium to large cat breed, so don’t be surprised if you find your cat just keeps on growing, and growing, and growing, for the first few years of his life.

And finally, while this cat developed naturally, honed by natural conditions in the Russian wild, and is a magnificent hunter and predator, the Siberian is also a very loving, affectionate, loyal, and gentle cat.  In fact, there are those who marvel at this breed’s dog-like qualities.  The Siberians love keeping company with their owners, and they make perfect lap cats.  They are also quite calm and placid, and you’ll probably be surprised how such a furry bushy cat can suddenly surprise you with his array of sweet meows, trills, and chirps.  And of course, endless purring.

This is an intelligent breed, and they are quite trainable.  They have the capacity to master a great number of commands and tricks for the patient owner-teacher.  They are quite agile, playful, and certainly loving.  Is it any wonder that they are fast becoming a favorite breed among cat enthusiasts and cat shows around the world?

They come in all colors and coat patterns, and are characterized by a general roundness in shape.  This is on account both of their abundant triple fur, as well as the solid, muscular physique.  They are pretty agile, and generally healthy.  So far, Siberians have been shown to be prone to only one genetic disease, and if bred responsibly, you might find yourself getting a Siberian kitten who will be part of your life for a very long time.

Pedigree: the result of careful breeding and development of the erstwhile natural “Siberian” cats that were well-known for years in Russia

Coat Texture: can be soft or very coarse; longer and thicker fur on the shoulders and chest, curly but not wavy coat on the legs and belly, and a full mane on the chest

Eyes: large, slightly oval in shape, but with a rounded lower line, set wide apart and are slightly oblique; colors can range from coppers to greens, and blue in Neva Masquerade varieties

Ears: medium to large, wide-set, rounded tips with a forward tilt; tufts of fur from the inside of the ears and on the tips, giving them “lynx tips”

Tail: medium length, wide at the base and with a blunt tip; thickly covered with fur from the base to the tip

Temperament: loyal, affectionate, friendly and playful, often being described as having a “dog-like temperament

Other Pets: gets along with dogs and most other pets

Exercise Needs: needs some daily exercise, either playing or walking

But prior to this time – one might say ages before this time – the Siberian cats were already pretty well-known in Russia.  Before breed standards and feline pedigrees, they were known mainly as “the fluffy cats” to Russians.  This is a natural breed that adapted and evolved over time to their natural environment, in relative isolation to cat populations from other regions (i.e., “landrace”).  It is thought to be closely related to the Norwegian Forest Cat, and is even said to be the ancestor of all modern long-haired cats, though it is more probable that all modern long-haired cats such as the Angora and the Persian share the same ancestors with the Siberian.  The Siberian, though, certainly evolved in its own unique way – by acclimatizing itself to the cold and snowy Russian climate.

The Siberian is ancient, and the earliest records of this magnificent cat can be traced back to as early as 1000 AD.  Since then, they have figured prominently in the popular consciousness of the local population – in Russian folktales and fairy tales, they were known as protectors of the elderly and of children, and are able to open gateways to magical realms.  Many were feral, or existed in the wild, others were strays, while there were some domesticated Siberians that grew close to their adoptive families and dutifully performed mouse catching duties.

Interestingly, the name “Siberian” is a bit of a misnomer.  Perhaps it has to do with some of the folklore associated with this natural breed – as cats that were said to have descended from wild forest cats from the dense, snowy forests of the taiga, or as cats that guarded the monasteries in Siberia during the Middle Ages.  Or perhaps it was the unique, triple coat that one easily associates with the severe snowy climate of Siberia.  There is no actual evidence or documentation, in any case, to show that the Siberian cats originated from Siberia, or were endemic to North East Russia, as they were could be seen pretty much everywhere in the country.  Among the stray cats, those with thicker and waterproof coats had better chances of surviving the climate, so these were naturally more prevalent.

But no one can really point to a specific breed that can be characterized as a “Siberian.”  One interesting anecdote is post-war Leningrad after the 872-days siege.  The city was devastated, and many of the population, including the cats, died of hunger and cold.  It was fertile ground for the invasion of rats, which people later sought to counter by bringing in cats from all over the USSR.  These cats were brought to the Russian capital by train, and thus cats of all possible types mixed, including, of course, the long-haired fluffy cats known as the Siberian.  Though the mixture of thousands of these cats naturally resulted in many different types.

In the 1980s, the cat fancy hit Russia and the USSR, and shows took place in large cities such as Riga, Moscow, and Leningrad.  Many people poured into these shows, bringing along their cats, and various breeds were identified among these household pets, but of course nobody could consider them purebreeds yet. 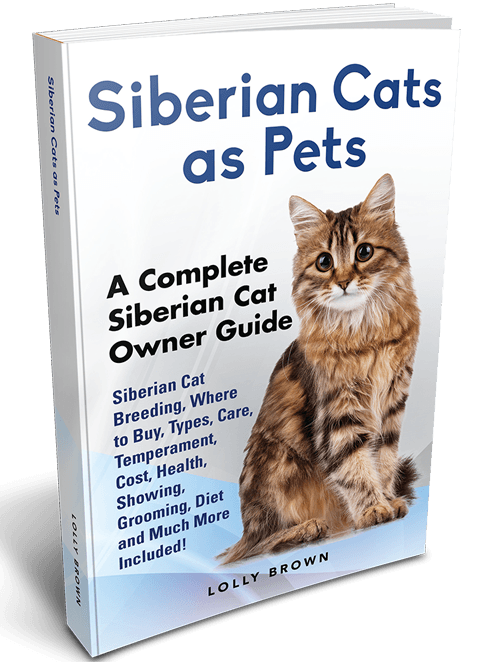