► Chapter One: A Closer Look at the South American Horned Frog

► Chapter Three: Frog Supplies and Setting Up an Enclosure

► Chapter Ten: The Ornate Frog and all the Species

Chapter One: A Closer Look at the South American Horned Frog

The South American Horned Frog is a type of frog from the Ceratophryidae family. They are commonly called the Pacman frog because of their distinct disc shaped body and their enormous mouth that seems to take up a big part of their physique. They are great frogs to watch and study as they go about their usual days. They are the chill sort of frog that looks like a character from a children’s story book.

A baby South American horned frog can be as big as a quarter when you get it but it would later grow up to be quite a big sized frog upon maturity. It can grow to be as big as a small saucer, or the size of an adult person’s palm! The South American horned frog is a good choice of frog specie for a new amphibian keeper. It does not need too much in terms of accessories so maintaining them, whether you get an individual frog or a couple of them, will certainly be a breeze as long as you know what you need and what to do.

This is not exactly the frog that likes to be held, so you will need to remember to keep handling to a minimum. Only handle South American horned frogs when absolutely necessary. We shall be going over more of the proper care and needs of the South American Horned Frog as we progress. In the meantime let’s get to know them a little more.

This frog is commonly known in the pet trade as the South American horned frog. Often times the frog that has a truly big mouth, is called the Pacman frog. The scientific name of this frog is the ceratophrys ornata. They are also known as the Argentine horned frog, the ornate pacman frog and the Argentine wide-mouthed frog. They grow up to about 6 inches long upon reaching adulthood and the female South American horned frogs are larger and bigger than their male counterparts. These frogs are about as long as they are wide, giving them that almost saucer-like shape when it is at rest.

Life in the Wild and in Captivity

In the wild, a South American horned frog could live up to about 5 years. This lifespan is dependent on how well of a hunter the frog is as well as how well it conceals itself from predators that would feed on them. When in captivity their chances of living longer lives increases as long as they are given the proper care and treatment they require. They thrive best in an environment that has loose substrate and where shallow water is present. They are quiet predators who lie in wait for their prey to come along. These frogs would commonly be found burrowed beneath the earth or contentedly be sitting in a small pool of water.

The South American horned frog is not a great swimmer, but it does like soaking in water. Not only does the water keep them hydrated, it also helps their respiration. Their name says it all, and gives some indication of the habitat where they can be found naturally. Keep the room temperature between 75 – 80 degrees Fahrenheit. Make sure that the frogs are misted daily to ensure proper humidity.

These frogs are voracious eaters. In the wild, the South American horned frog would be seen dining on small fish, flies, mosquitoes, and other insects native to the area it lives  They can be fed earthworms, crickets, phoenix worms, silkworms, and butter – worms. They may also be given the occasional mice, wax worm and a couple of guppies. They should not be fed super – worms or mealworms because of their hard, shell-like exterior. They are such hardy eaters that they would be able to gobble up a full grown rat! It is also not unusual to see one South American horned frog eat another of their kind.

Female South American horned frogs are generally bigger than their male counterparts. A mature female Argentine Horned Frog can easily eat a grown rat. These frogs, commonly found in Argentina, are also known to be cannibalistic. They are known to eat their mates, even if their mates are bigger than they are. It is highly advisable to isolate multiple frogs from each other.

These frogs are such voracious eaters that it wouldn’t be odd to see them attempt to eat something larger than they are. They are known to be able to swallow animals that are half their size. They have a row of sharp bony projections for teeth located in their upper jaw. This feature of theirs makes it nearly impossible for these frogs to let go of their prey after they have it in their mouth. If this is not minded by the keeper of the frog this could lead to the choking to death.

These frogs who got their looks from the famous Pacman game, looks like it is all mouth when it eats. They have mouths as wide as their heads and they lunge at their prey, much like the hungry yellow disc of the famous arcade game. The ornate horned frog is one of the several species of horned frogs that are native to the tropical and montane rain forests. A few of the other species of ceratophrys can be found in more arid regions. These frogs are native to Northern Argentina, to Uruguay and the Rio Grande do Sul region of Brazil. They are carnivorous amphibians who grow to be very large frogs.

These amphibians grow at an exceptional rate, taking on their adult form just a couple of weeks after they hatch. From this point they continue to grow at a rapid rate. These frogs are often sold in the pet trade when they are no larger than a silver dollar and within a short five months these frogs will reach a size of six inches. From the time they are tiny little cornets to their adult size, these frogs are magnificent to observe and watch.

They are roundish in shape and have a plumpish physique. It is hard to tell where the head of the frog ends and its body begins because there is little demarcation to indicate. Their pupils are located high up in their eyes, adding to another similarity to the Pacman game.

The skin of the ornate frog effectively camouflages the frog when it lies half buried in dirt or fallen leaf piles. Their warty green, yellow and white skin, with a smattering of red and black flecks make for a perfect disguise when it is lying in wait for its next passing prey. The minute something comes within its limited, leaping range, it will make a go for it. Be it another frog, snake, a rodent, a lizard, a small bird or large insects, anything moving and in its general reach is free game. It only takes a couple of gulps for the South American horned frog to swallow its prey. 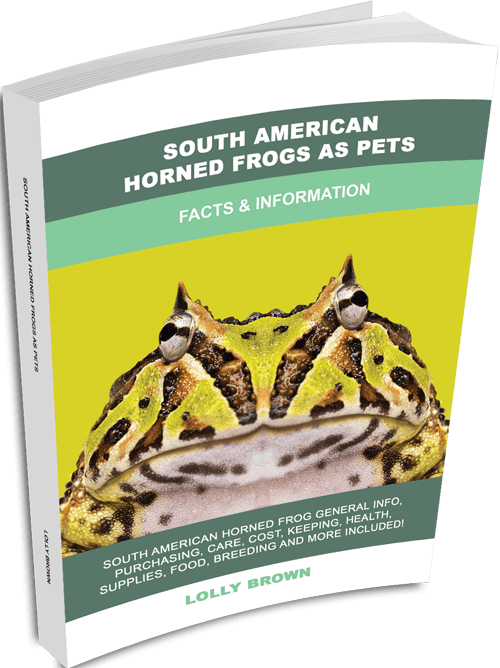