► Chapter 1: Getting to Know Miniature Pigs

► Chapter 4: Caring for Your Miniature Pigs

Chapter 1: Getting to Know Miniature Pigs

Miniature pigs may often time look like your weird friend, the new kid in school, your unexpected roommate, your playful sibling or that very adorable kid you always wanted. In whatever attitude or mood it appeals, you can expect it to be quite docile and wild at the same time yet very interactive and a cool pet you never thought of having.

Miniature pigs are irresistibly cute but it may not be the right choice for everyone. Before you decide whether or not it might be the right pet for you and your family, you need to learn and invest a significant amount of time in getting to know these animals.

In this chapter you will receive an introduction to the different mini pig breeds including some basic facts and information as well as the history of how it came about. This information, in combination with the practical information about keeping miniature pig in the next chapter, will help you decide if this is the perfect pet companion for you.

In this section you’ll find some interesting fun facts about Miniature pigs, their breed origin, breed types and history.

Miniature pigs are domesticated smaller versions of feral hogs and combinations of different pig breeds that were genetically engineered by researchers. In the United States, mini pigs are also known as the “American Mini,” they are just the same with pot belly pigs, although they have been classified as a different group because of certain characteristics that aren’t found in American mini pigs. In United Kingdom, researchers and animal enthusiasts referred to it as a “Teacup pig.”

The American Mini or miniature pigs in general are a “mixed in” or combination of different breed types of feral hogs. Currently there are no tests to determine their genetic make-up or the exact pig breed/s they came from. However, there are parentage test with only a few recognized breeds or types of swine that are filed out. According to research, many pet owners across the United States don’t know and will probably never be interested to know the origin of their pet pigs, but one thing is for sure, their popularity as house pets and in local zoos are increasing.

The mixture of genetic breeds from different hogs found in the wild and from their Asiatic ancestors, resulted in a variety of mini pigs that can be identified through their colors. The pure bred hogs and Asiatic pig breeds brought in the U.S. are color white, black as well as black and white with varying patterns. Today, mini pig owners can choose from a variety of colors such as cream, blue, silver, apricot, strawberry, tangerine, auburn, honey, ash, stone, toffee, champagne, maple, praline, caramel, pecan, chestnut, cinnamon, chocolate mahogany, roan and agouti. You can also choose from its wide variety of markings and patterns such as stripes, spots, ticked, solid, pinto, broken, tricolor, point, tuxedo, belted, saddled and blue butt thanks to scientific breakthroughs. Some breeders and mini pig enthusiasts also bred their own mini pigs thus creating new patterns and mixture of colors but some of it are not officially recognized.

Most American Mini Pigs body type is quite different from pot belly pigs, usually the American Mini can be differentiated because of their thicker coat and they don’t have a swayed back feature and little to no pot belly.

Fortunately, unlike their wild hog ancestors, most mini pigs are very docile, and friendly creatures and they can also be trained. Miniature pigs are also fond of chewing plants and farm foods like any other farm bred pets, but be careful because some mini pigs are only advised for a certain type of strict diet. For most people mini pigs are low maintenance and manageable that is why they have been developed in the first place, however the needs of your pet pig can be quite expensive, later in this book we will tackle about the things you need in order to take care of your mini pig. These creatures are mostly gentle and understanding and they are naturally people-oriented.

Proper socialization and training from a young age will help prevent the mini pigs from being aggressive to people. Varieties of miniature pigs do very well as family pets and they can also be good with children – although may not be recommended for very young children.

The mini pig has a small but compact body type. It should weigh below 55 pounds; the heaviest can reached 50 – 55 pounds.  They usually have black and bright eyes with sniffy noses as most pigs do.

Like any other pets, mini pigs also have a great deal of energy and needs daily exercise to work off that energy through the toys and random experiences that you can provide. It may not be able to adapt to any kind of environment, but if you raised them properly they can be great house pets. They are generally curious yet controllable indoors as long as they get enough mental and physical stimulation during the day and has proper house training as well as litter training.

The average lifespan for the miniature pig breed is between 12 and 18 years, some mini pigs have a longer lifespan; the breed is quite healthy in general as long as you take care of them properly. Like many pets, however, the mini pigs are prone to health issues such as Dippity Pig Syndrome, UTI, Pig Fever and Intestine Parasitism which will also be tackled in the next few chapters later on in this book.

In terms of grooming, the miniature pigs usually have thick coats but it doesn’t necessarily need to be brushed and groomed, however their hoofs and dental health requires a regular check-up.

In this section, you will learn some of the most popular miniature pigs – their physical characteristics, a snapshot of their origin and other important details you need to consider before acquiring them. Not all of the breeds listed below are suitable for you and some may also not be available in your area, so be sure to read the common facts and also try doing a bit of research if you have selected a pet pig breed. The American Mini has the most variety of colors and patterns.

The American Mini is a combination of different variety of hog and domestic pigs around the world. They are solely bred as house pets and companions. It is the perfect pet pig for mini pig enthusiasts out there. It has a compact body and stands at about 15 – 22 inches, smaller in stature and very suitable for indoor/outdoor activities. They are the healthiest type of miniature pig and according to researchers, it has a great temperament.

The Mule Foot Hog breed has a small head with a proportionate body size and its eyes have are quite apart from each other. It’s not suitable as a pet for those who live in small apartments because it is quite huge, it is much suitable for owners who have a garden or a mini farm area on their backyard. 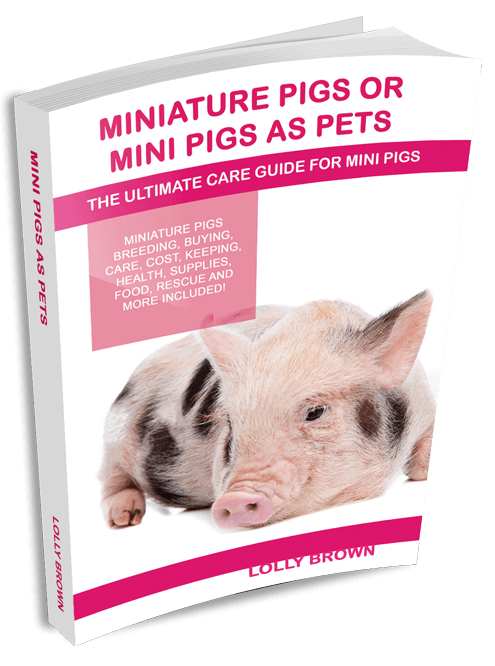