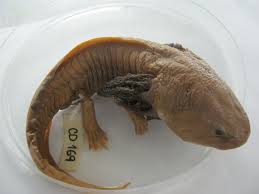 Axolotls, or Mexican salamander, are growing in popularity among pet owners. Their unique features and adorable physical characteristics endear them to their owners, especially among young pet owners. But before you decide to buy one to breed, you need to know a few fun facts about axolotls you probably did not know.

Right off the bat, the name of axolotls can be intimidating to some. The name axolotl is derived from two words: atl and xolotl. Atl translates to water while axolotl refers to a dog. You must pronounce the word as “ax-oh-lo-ul”.

If you thought that white axolotls, also referred to as albinos, are common, think again. The normal color is actually either black or green. The white axolotls have this color because they are referred to as leucistic. They are developed from a mutant male axolotl that was bred in Paris way back in the late 19th century. This is a special kind of breed that has black eyes and white colored skin.

Their feathery headdress is not just for show.

One of the most notable characteristics that axolotls have is their feathery and colorful gills. However, this is actually a functional part of their body – it serves as the gills for the axolotls. It helps them breathe underwater, which makes them an aquatic species.

Wild ones can only be found in one place.

Axolotls might have originated in the lakes of Mexico, but since these lakes have been dried up, it is rare to find axolotls in the wild. Most remaining axolotls are bred in aquarium tanks and laboratories today.

In connection above, axolotls are considered an endangered species. Again, they no longer exist in the wild (and if they do, are very rare). The invasive species have whittled down due to various factors including water pollution, water loss and cannibalism (adult axolotls could eat the young axolotls). If you are breeding them, make sure to give extra care as you probably won’t be able to buy one easily.

You can eat them.

Yes! Weird as it may sound, axolotls are safe to be consumed by humans. Before they were considered an endangered species, axolotls were served whole with cornmeal in Mexico, also known as axolotl tamales. In fact, those who have eaten axolotls liken it to an eel in taste.

They have a mythological background.

The etymology for the name axolotl suggests its trace with a mythological history. Apparently, axolotls were named after a dog-headed Aztec deity.

Axolotls are one of those rare living species that can reach adulthood without undergoing metamorphosis. In fact, it is believed to exhibit juvenile traits even when it has reached adulthood. In fact, they stay on water even though axolotls might have developed lungs.

But sometimes they can grow up with a little push.

In rare cases, some axolotls can also undergo mutation. Axolotls that undergo this phase develop physical attributes that make them closely similar in appearance to tiger salamander. However, they only breed with a similar kind and never cross-breed with other species.

Regeneration is no problem for them.

This is one of the unique features of axolotls, which can also be true for other amphibians. What set axolotls unique from other amphibious creatures is the fact that it can regenerate its spine, jaws and brains, not just limbs.

Scientists are looking to harness that ability.

Due to the unique ability to regenerate, axolotls are being closely studied by scientists. They are looking to harness this ability and unlock how regeneration works for axolotls with the hopes of using this same technology on humans.