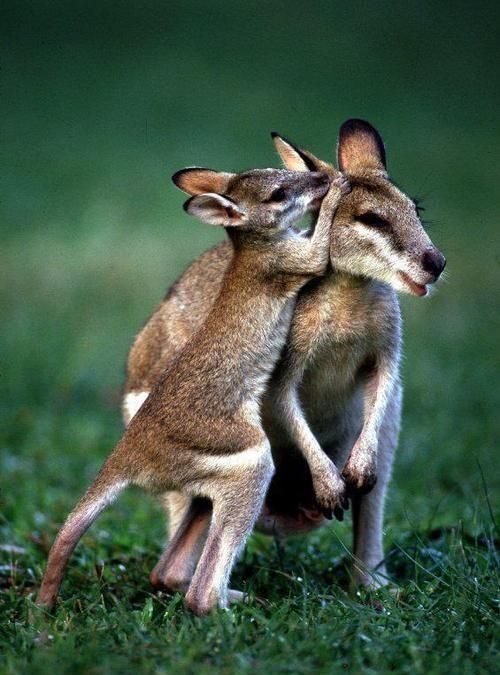 Kangaroos and wallabies are both marsupials, belonging to the same family called Macropodidae, under the genus Macropus. Both animals overlap in their native territories, but their most distinguishable difference is their size. Wallabies are distinctively smaller, with more varied color patterns. Kangaroos on the other hand, live longer, but they take longer time to grow and are more independent than their relatives.

Comparing and Differentiating Kangaroos and Wallabies

Kangaroos and wallabies are very different from each other. Kangaroos are larger marsupials. Red kangaroos for example are the largest; males can go as tall as 6 feet (2 meters) and weigh up to 200 lbs. (90 kilos). Grey kangaroos are just slightly smaller (lighter and shorter), but still significantly bigger than wallabies.

Kangaroos live longer than wallabies. They can go up to 20 to 25 years in the wild, and 16 to 20 years in captivity. In some cases, they can reach up to 30 years.

Wallabies on the other hand, tend to live shorter, as they only have an average lifespan of 11 to 15 years, or 10 to 14 years in captivity.

Both of their young are called joey, and both animals will give birth to one joey at a time. Females carry their young in their pouch until they’re independent. Wallabies stay in their mother’s pouch longer, and wean when they reach 7 to 8 months. They mate between 12 to 14 months.

Kangaroos nurse until they’re 9 months old, and stay in their mother’s pouch up to 11 months. By the time they reach 20 months, they are ready to breed.

Both species live in mobs (small family groups), which is led by a dominant male, and a bunch of females, their offspring, and submissive males. When baby a kangaroo has been weaned, but still not independent to leave their mother’s pouch, the mother leaves the mob until the baby kangaroo is gone.

Kangaroos usually have evenly distributed color patterns throughout their body. Grey kangaroos for example, have different shades of dark and light grey, pretty similar to red kangaroos, but the latter has patches of white on their face, ears, and legs.

Wallaby ears tend to be larger (proportionally speaking) than in kangaroos. Other than that, both animals are very similar in other physical features, such as power in their distinctive hind legs and tail, which forms like a tripod when at rest.

Kangaroos can be aggressive, which is why we usually find them boxing other kangaroos.

Both animals have conflicted with humans in their native environment. And because they’re herbivores, they compete with other domesticated animals for food, such as cattle.

Facts About Wallabies and Kangaroos, and Their Threats for Survival