Home » Eels » Four of the Most Popular Saltwater Aquarium Eels 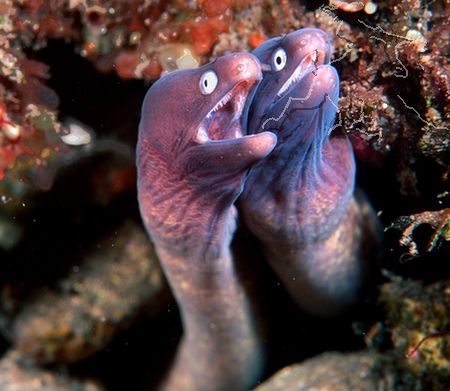 With long, elongated, serpentine-like body and a mouth full of extremely sharp teeth, saltwater eels have quite a intimidating appearance. And this is why many exotic pet loves choose to have them in their home aquarium, including the fact that most species adjust well in new habitats, even in life in captivity.  Some types of eels can reach a colossal size, even in captivity. Thus, it is best to research the type of eel you want to have before you get them for your aquarium.

Saltwater eels are carnivorous animals. However, they have quite a bad eye sight, which is why they depend mostly on their keen sense of small to look for food. They prefer crustaceans, scallops, shrimps or any large and chunky food. Those housed in aquariums are fed using a special tool designed to show eels their food closer without risking a finger.

Here are some examples of saltwater eels great for home aquariums:

This saltwater eel is one of the most popular eels for aquarium trade. It stays relatively small, adjusts well to any food, and can live with other fish inside the tank than any other eels, though they may harass other tank mates when food is added in the tank. They have slender bodies with white colors and a hint of yellow tint. They have distinguishable round black or gray chain marking across their body, hence the name “chainlink”.

Like most types of moray eels, chainlink spend most of their time protruding their head from crevices or rocks throughout the day. But they usually become brasher when the tank is illuminated. They can reach a maximum of 28 inches.

This type is probably the most docile eel out there; they rarely bother anyone, even smaller fishes, making them perfect for aquarium environment as they can live peacefully with other creatures inside. Also, they prefer to feed on crustaceans than fish.

As with other eels, they need a lot of hiding places such as crevices and rocks, as they love to spend most of their time hiding their body while protruding their head. Adults can reach up to 55 inches in the wild, but only around 36 inches in captivity.

Another popular eel for aquarium trade, this one also accepts most foods and stays small, making them suitable for aquarium space. They’re also quite passive creatures, making them less of a threat to other fishes they can’t swallow in the aquarium. They’re nocturnal predators, but they can easily adjust with fish, shrimp, freeze-dried krill and meaty foods in captivity. In the wild, they can grow up to 40 inches, and around 24 inches in captivity.

Also referred as the Honeycomb moray eel, this is one is one of the most attractive moray eels out there. When young, their bodies form a lattice pattern on their spots. The spots become relatively smaller in adults, showing more white background in their pattern. This type however, can get pretty large, which means it needs an appropriately large housing. Their massive size lets them jump out in the open easily. Thus, your tank should be tightly sealed.

They feed on live food like feeder fish, shrimps, small octopus, squids, etc. Also, it’s quite an aggressive predator, feeding on any fish it can swallow. They can also eat smaller eels. They can grow up to a colossal size of 70 inches.

What Are the Aquarium Systems for Saltwater Fish?