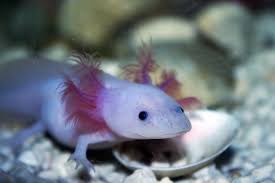 Axolotl is one of the most unique animals you can find in the planet. They keep their larval state even when they reach adulthood and become sexually mature. Scientists call form of adaptation ‘neoteny’, which many refer as a backward step in evolution, as it keeps the specie from metamorphosis and not develop any characteristics that will allow them to dwell in land. As a result, axolotls are salamanders that live underwater for the rest of their lives.

With this, neoteny, causes the animal to keep its larval physical features, such as gills and dorsal fins.

Axolotls are carnivorous, which means they have an internal carnivore anatomy, with the exception of teeth. Rather than having sharp teeth to rip and chew meat, they have pediculate teeth, which are small cone-like teeth. This is because they simply open their mouth wide and swallow their food whole.

Axolotl’s respiration system is quite unique in the salamander world – they breathe using four methods.

The seemingly headdress (Rami) axolotls have is actually their gills. Its unique structure branches out from both sides of its head, sprawling those delicate membranes of very small capillaries called Fimbrea. The capillaries branches out from the arteries. The gills allow water to move through the tiny.

Membranes, filtering oxygen and seeping it straight to the bloodstream, passing carbon dioxide back to the water. Interestingly, rather than moving around to allow water to pass through their gills, they just wiggle their gills to breathe.

Scientists call it “cutaneous respiration”, which means breathing directly through the skin. Axolotls have very thin and delicate skin, which allows gas to pass through with relative ease. The slimy coating on their skin also helps their breathing, which is why it’s almost always moist and active.

Through the Back of the Throat

They call this “Buccal respiration”, and axolotls use their Buccopharnygeal membrane, which is located near the back of their throat to breathe. They flap their skin on this part of their body to allow water to pass through and absorb oxygen similar to how cutaneous respiration works. As their throat pulsates, the oxygenated water passes through the membrane, even reach the gills with the fimbriae, and across the sides, allowing the animal to breathe three ways simultaneously. Axolotls use their buccal pouch as part of their eating mechanism as well.

This may seem like a shocker, as neotenic animals such as axolotls primarily use their gills to breathe, but actually, they have lungs too. They use their lungs when oxygen level of water becomes too low, or if they just feel like it. They can swim up to the surface, swallow a bubble and send the air straight to their lungs. Sometimes, the use the air from the bubble to float for a while, and then they burp it out.

As a matter of fact, as playful creatures, axolotls love to gulp bubbles. You can see them rise to the surface and take a quick gulp of air to fill their lungs.

How to Keep Axolotls Alive?