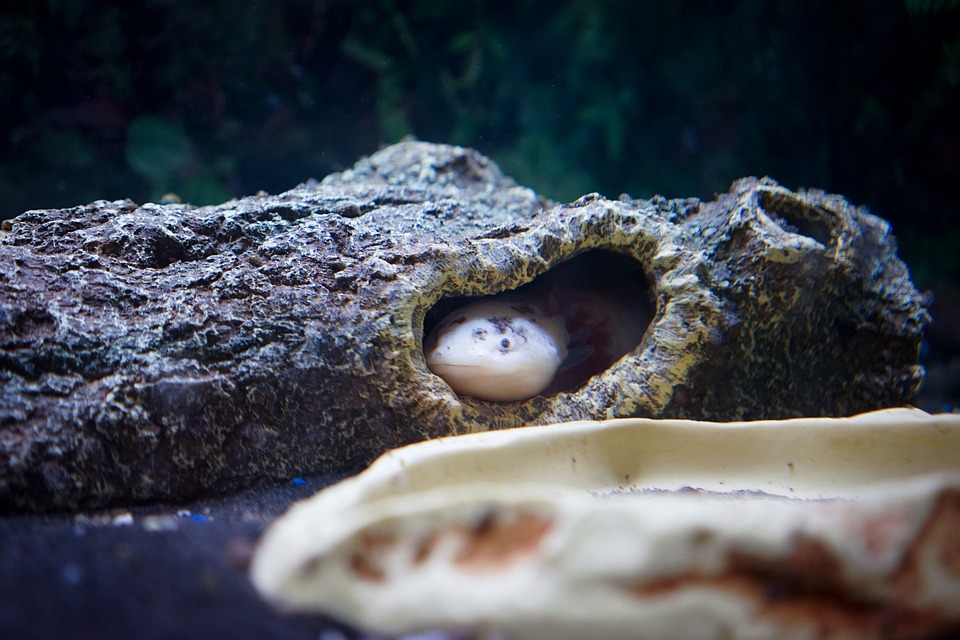 How do Axolotls breathe? Axolotl is definitely not your average animal, as they have the ‘cellular regeneration’ ability. But unlike other amphibians that leaves the water and dwells on land once they’re sexually mature, axolotls stay aquatic for the rest of their lives. Also, they’re neotenic, which means they keep their juvenile physical characteristics, such as gills, despite reaching maturity. This gives axolotls that cute and funky appearance, as their gills look like headdress on both sides of its head. Are Their wide head, big mouth, and small lidless eyes almost always guarantee you will never see any animals like them in the world.

Axolotl is one of the most unique animals you can find in the planet. They keep their larval state even when they reach adulthood and become sexually mature. Scientists call form of adaptation ‘neoteny’, which many refer as a backward step in evolution, as it keeps the specie from metamorphosis and not develop any characteristics that will allow them to dwell in land. As a result, axolotls are salamanders that live underwater for the rest of their lives. Axolotls are carnivorous, which means they have an internal carnivore anatomy, with the exception of teeth. Rather than having sharp teeth to rip and chew meat, they have pediculate teeth, which are small cone-like teeth. This is because they simply open their mouth wide and swallow their food whole.

How do Axolotls breathe? Axolotl’s respiration system is quite unique in the salamander world – they breathe using four methods. The seemingly headdress axolotls have is actually their gills. Its unique structure branches out from both sides of its head, sprawling those delicate membranes of very small capillaries called Fimbrea. The capillaries branches out from the arteries. The gills allow water to move through the tiny. Membranes, filtering oxygen and seeping it straight to the bloodstream, passing carbon dioxide back to the water. Interestingly, rather than moving around to allow water to pass through their gills, they just wiggle their gills to breathe.

Cutaneous respiration means breathing directly through the skin. Axolotls have very thin and delicate skin, which allows gas to pass through with relative ease. The slimy coating on their skin also helps their breathing, which is why it’s almost always moist and active.

Axolotls use their Buccopharnygeal membrane, which is located near the back of their throat to breathe. They flap their skin on this part of their body to allow water to pass through and absorb oxygen similar to how cutaneous respiration works. As their throat pulsates, the oxygenated water passes through the membrane, even reach the gills with the fimbriae, and across the sides, allowing the animal to breathe three ways simultaneously. Axolotls use their buccal pouch as part of their eating mechanism as well.

This may seem like a shocker, as neotenic animals such as axolotls primarily use their gills to breathe, but actually, they have lungs too. They use their lungs when oxygen level of water becomes too low, or if they just feel like it. They can swim up to the surface, swallow a bubble and send the air straight to their lungs. Sometimes, the use the air from the bubble to float for a while, and then they burp it out. As a matter of fact, as playful creatures, axolotls love to gulp bubbles. You can see them rise to the surface and take a quick gulp of air to fill their lungs.

How do Axolotls breathe? Axolotls can accept organs from other axolotls, and their body won’t reject them. You can remove its segments, cut its arms, spinal cord, etc. and it will all grow back like nothing happened, and the animal will survive and live its life just fine. As a matter of fact, they can regenerate limbs up to 100 times, and each regeneration is perfect. What’s even more amazing is axolotls are far more resistant to cancer than other mammals, as a matter of fact; scientists say axolotls are up to 1000 times more resilient against cancer. This is another unique trait of axolotls. Adult axolotls are still in larval form because they do not undergo the metamorphosis stage. All types of salamanders go through metamorphosis except for axolotls. This process is known as neoteny wherein the axolotls remain in the larval form throughout their lives.

Even though axolotls skip the metamorphosis stage, they are still highly capable of growing and reproducing. In fact, an adult axolotl can grow up to 18 inches in length. The average size of an adult axolotl is about 9 inches! Another unique characteristic for axolotls is their ability to reproduce faster than salamanders do.

The list of things that make axolotls unique continue to add up. Aside from not going through metamorphosis and having no eyelids, axolotls also have the ability to regenerate. This means that if they manage to cut off a limb, that limb has the capacity to re-grow. This is true not just for their limbs or external body parts – axolotls can also re-grow their organs such as kidney, lungs and brain! In fact, biology of axolotls had been at the center for studies on regeneration ability. Scientists are studying how regeneration occurs and if it could possibly be used for medical treatment on humans.

How do Axolotls breathe? Biology of axolotls is naturally carnivorous; this explains why they tend to eat baby axolotls when you put them together in one living container. The anatomy of axolotl is therefore typically carnivore except for their teeth. An axolotl’s teeth are actually a group of small stumps or cones. The first thing they do when they eat is to grip the food and then maneuver it into position that would enable them to swallow it whole. As you can see, there are several features that make axolotls unique biologically speaking. From the absence of eyelids to their ability to re-grow limbs and organs, this amphibious species has certainly captured the attention of many, especially scientists. At the same time, axolotls are also quite popular as pets due to their unique physical characteristics that make them eye-catching.