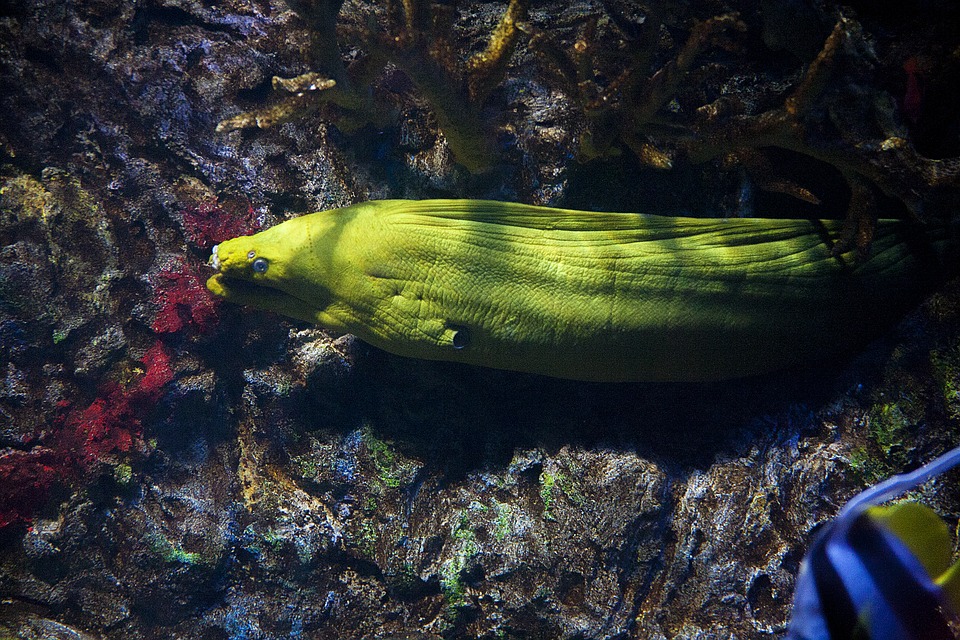 The eel habitat of the famous Moray eels can be found on the marine. They are usually near the equator, in the most tropical region that is living by the coral reefs. They like to spend time among the small crevices and cracks between the rubble and corals. This would provide you a good idea on the ideal aquarium that they would need.

Both rocks and corals are very important in the eel habitat mainly because they want to weave themselves in between them. Weaving would encourage natural behaviors as well as keeping themselves very happy. They can be active during feeding time and very stronger than what they look like, so you need to put rocks in firmly to avoid being knocked down.

In the issue of the substrate, is all boils down to a matter of personal preference. Your eel could produce a lot of waste and many people would like to have a bare-bottom tank. But, eels like to bury themselves in substrate. If you like them to bury themselves in their eel habitat, you could put a layer of very fine gravel or sand and keep it thin so as you can still see your pet.

Their body length could vary from 4.5 inches up to 13 feet, the requirement of the tank or their eel habitat would greatly vary well depending on their species. The largest of the eel could be larger than 10 feet, they are rarely kept in your home aquarium because of the trouble in giving enough space. Some might reach 2.5 feet or even more by their adulthood, so you should have at least 30 gallons tank. Mini Morays could lengthen up to less than 14 inches. They will be comfortable in an eel habitat tanks that are as small as 15 gallons.

We should also note that because Morays are naturally curious, your tank should be fitted to have a secure cover and make sure that there is no gaps. Your eel would like to roam around their eel habitat if they have a chance.  Since your eel has a carnivorous diet, it would result to a lot mess in a short period of time. You need to make sure to change the water every one to two weeks. This is done to prevent the build up of any nitrogenous waste. Canister filters as well as wet-dry filters are two examples that could help in maintaining a suitable water quality.

The optimal parameters for your pet is really broad. Luckily, it needs to no special requirement and would need to flourish in most marine aquarium set-up. The right pH should be between 7.6 up to 8.4, the salinity should be between 1.022 up to 1.025. The same could be said about the temperature, it should be around 74 to 79 degrees Fahrenheit.

Your Moray eel will not add a great alternative look in your aquarium but also give some rare yet still interesting behaviors. At first, one of the greatest behavior is how the eels swim. They have an undulate body that is sinusoidal (S-shaped). They create waves in order to push themselves forward. This is a great addition in contrast to the classic fish that uses either of their pectoral (side) or even their caudal (rear) fins in order to move forward.

Another good behavior is hiding between the rocks while they are sticking their head out while they are moving their bodies beneath.  When they live in the wild, this is known to be a hunting technique with the main aim to ambush their prey. A great stranger hunting technique would involve a Moray biting a fish while it is tying itself into a knot, in order to improve the power as well as grip. This is very reserved as well as rare for larger prey.

Your Moray eels is known to be nocturnal. They would adapt your feeding routines and still would great made addition in the daytime activity. They would secrete out mucus to their bodies in order to protect themselves from parasites as well as germs. The mucus may become food for a hunger cleaner as well as help those sand-dwelling Morays form a stronger burrow because the mucus would adhere the sand grains together.

For a lot of species, the mucus that was produced contains a lot of different toxins, but would not to the degree that would either harm or hurt the owner or even the eel habitat mates. But, these toxins would explain why the bite of the Moray is very painful compared to those predatory fish in similar sizes. One typical question asked is whether this eel is electric. Truth be told, they are not really electric, but they could be easily confused because of the famous electric eel, but they are known to be the freshwater knifefish from South America.

If you want to put eels with fish, make sure that you introduce the fish first in the tank before you put the Moray. More importantly, the fish should be at least three times larger than the girth of the eel. Groupers are more of the ideal companion but you should bear in mind the difference in sizes. The most suitable tank mates are a Cleaner Wrasse. When in the wild, they really like Morays due to the nutrient-rich slime, and the latter would use this to pick off the parasites. When they live in an aquarium, the Cleaner Wrasses are more likely to be eaten, so make sure to introduce it to the tank before the eel. This would reduce the chances of them being viewed as food.

Lionfish is another popular tank mate. You should not keep any small fish because, again, it will be seen as food. Larger fish are more suitable, but this could also be risky. In general, they should be kept in a specific species tank or in a large community, robust fish. A rule of thumb, less risk of the fish would need a larger eel habitat.

If you plan to put more than one piece of the same species, it could result in fighting. This would hold true if one is introduced first after the others have settled. Fighting may occur due to food or even territory dispute. If you want to keep more than one eel, make sure to have a big tank with a lot of hiding spots that would make them easier to escape one another. If fighting occurs frequently, then you need to separate the perpetrators. You can keep them in singles so you will not be forced to purchase a group.

Luckily for you, these hardy fish are very resistant to most diseases. They are unaffected by the Ich, or the Ichthyophthirius multifiliis, this is considered to be one of the most persistent fish diseases. Most of the health issues that you may encounter come from feeding, poor water condition, or could be attacks from other fish. But, occasionally, your Moray could suffer from either inflammation or skin lesions.

Remember, it is very difficult for your Moray eel to be bred in their eel habitat as well as in captivity. One of the reason is that one female would potentially mate with one or more several eggs before she decides to release the eggs. At the larval stage for your Moray eels, they could stay up to 10 months, it is very hard to cater it in an aquarium. One other problem is determining the sex through the naked eye.