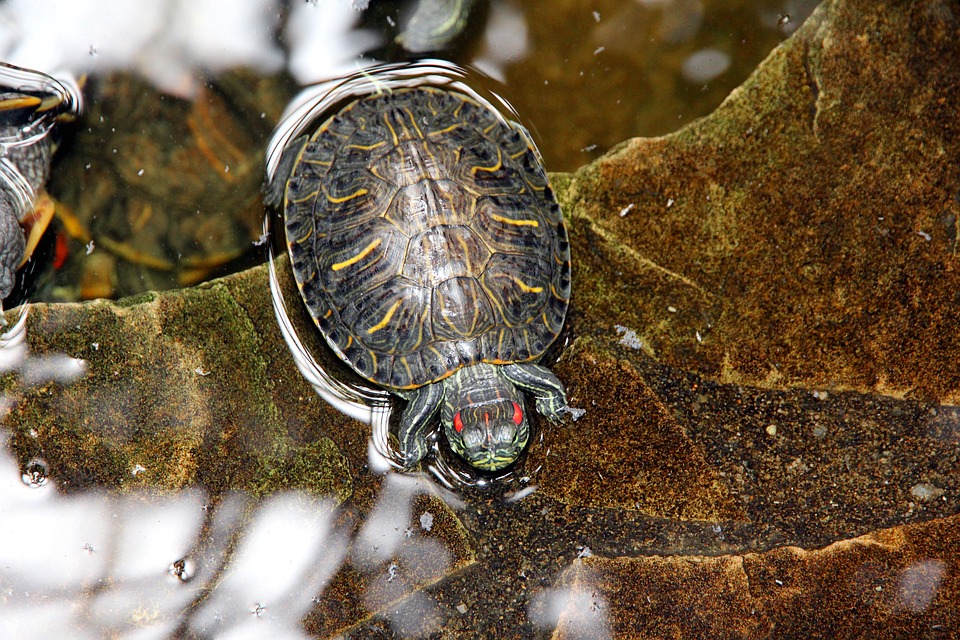 Avoid handling your new red eared slider turtle for at least a week after getting it. Allow it to get used to its new surroundings and let it inspect everything you have painstakingly done to make its new home a warm and welcoming one. Give each other time to get used to one another – your turtle will get used to you being in its presence when you feed it and gawk at it from the other side of its tank.

Once used to your presence, it will equate your being there with feeding time and will start to acknowledge you as it bob its head in seeming approval. It may even swim excitedly to and fro as you come closer to its tank. When you and your turtle have had enough time to get to know each other from behind its enclosure, you might now want to say hi on a more personal level. When you do decide to pick up your turtle, do so gently so as not to give it a fright.

To do this, grasp your turtle like a burger making sure to securely but gently hold on the sides of its shell from the center of its body. Make certain that you have a firm but gentle grip on your new buddy because you don’t want turtle slippage to happen if it suddenly moves its wet and slippery body.

Excessive struggling and a display of stress are signs your turtle isn’t quite ready to be handled yet. Limit this period to shorter meetings and build up the length of bonding time as the turtle learns to get used to these periodic social visits.

Nature in all its wondrous marvel has a way of giving us humans cues and signs for situations, instances, and events of which a potential caregiver should be aware. Learn more about the growth and development of the red eared slider turtle and empower yourself with useful knowledge to successfully care for one.

A pivotal phase of embryogenesis conforming to the incubation temperature determines the gender of the turtle. Most reptiles are temperature-dependent and lack sex chromosomes which dictate gender. When incubated at temperatures ranging between 22 and 27 degrees Celsius, pond slider eggs will become only males. Incubated at a much warmer temperatures, eggs in this condition will only come out female.

When baby sliders are ready to meet the world, they hatch out of and emerge from the egg looking much like tiny adult red eared sliders.

Whether in its natural surroundings and environment or housed in a tank or a makeshift pond, red-eared slider turtles have been observed to actually enjoy the company of others like it. They are often seen in groups basking together, one on top of another either on fallen trees and broken logs usually near a small body of water.

They are social creatures and like to hang around with their own kind whenever possible. These turtles may not be big in talking, given that they have not been heard to make any particular or distinguishing sound, but they do in fact communicate with each other through touch and vibrations.

Basking in groups is not only an opportunity to socialize this activity also offers the security of safety in numbers, as well as much needed sun exposure which helps stave off the occurrence of parasites on their shells.

They are watchful of predators who may want to make them the main course of the day – specially steering clear of otters, mink, foxes, raccoons as well as most medium-sized beasts which prey on them and their eggs – by taking refuge in nearby water. They are also able to quickly retract their heads and legs and hide inside their hard shell should it get the whiff of danger. Consider the genders of the turtles you are thinking of housing together. A male RES is very territorial and may fight and bully other smaller turtles for basking space.