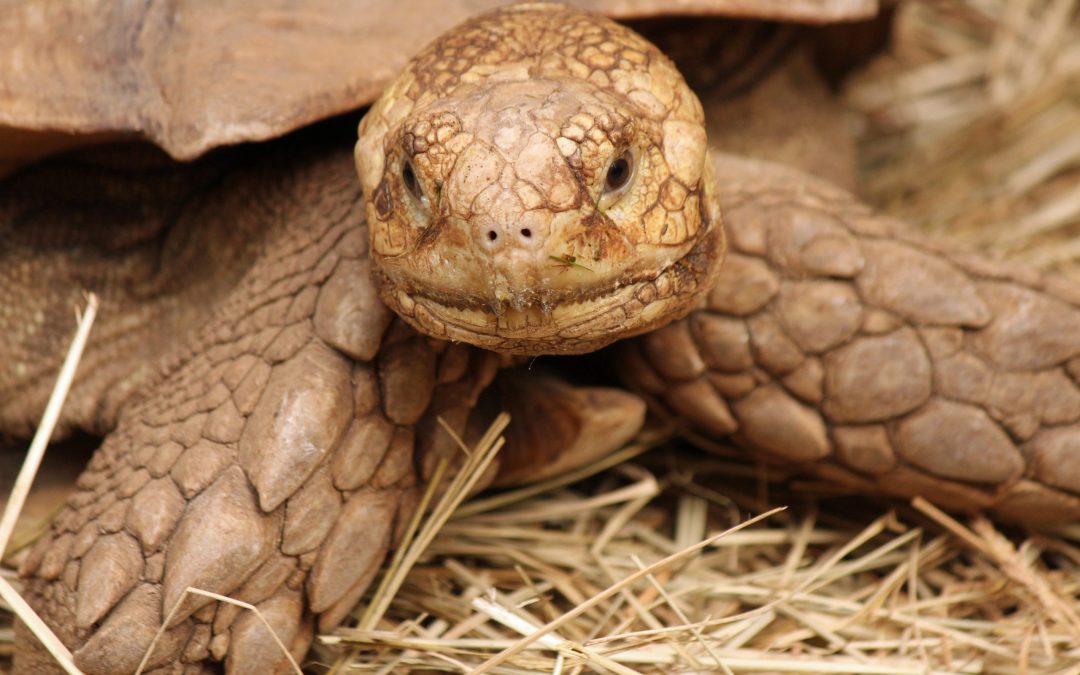 What You Need to Know About Sulcata Tortoise

Is Sulcata Tortoise right for you? “Sulcata” is a Latin word which means sculpted or furrowed; if you take a closer look at their shells, legs, and scales you’ll notice that they have a lot of furrows and specifications that makes them unique. They have a sandy and ivory shell with huge spurs on their hind legs.

Their top shell or so – called carapace has plates that has a shade of yellow; tan or light brown color that are outlined with brownish colors. Their bottom shell or so – called plastron has the same yellowish and tan color. The skin of the sulcata particularly its legs are covered with spiny and dull projections. The purpose of its spines; and hard skin is to protect them against predators in the wild and also functions as insulation keeping them cool during hot days; and warm during cold days. Their spurs have no function according to researchers but sometimes they seem to use it if they are happy because they wagged them off like a dog’s tail. The claws of African Spur Thigh is an amazing characteristic because you can’t see that in other turtle species since they are water animals and therefore have not developed that kind of physical trait.

Is Sulcata Tortoise right for you? Sulcata tortoises live for over 50 years and more! The oldest sulcata tortoise in captivity is around 55 years old (which is housed in a zoo in Egypt); while the oldest recorded tortoise in the wild is around 80 years old. You might be wondering why these creatures can survive that long even if they are in the wild, well that’s because they are pure herbivores! They like to nibble grass, cactus or any greens they can find; they can also eat a whole plant!

These factors are beneficial in the ecosystem that they are in while living in the wild because since they eat lots of plants; they also tend to defecate a lot of it which is beneficial because their manure has moisture where the seeds can germinate and their poop can serve as a fertilizer and in a way make them literally create a garden around the burrow that they dug.

When it comes to feeding in captivity; sulcata tortoises are grassland species similar to other species like the Russian, and Greek tortoises as well as the leopard tortoise. These animals are constantly moving around their environment while nibbling on grass. However; grass and weeds don’t have nutritional value that’s why they’re constantly taking it in if they live in the wild. Since you will be feeding them with produce that contains lots of nutrients when they’re in captivity, you don’t want to over-feed them.

Is Sulcata Tortoise right for you? African sulcata tortoises are the gentlest pets a keeper can ever have; much more so than a very friendly dog or cat! They are perhaps one of the least threatening animals in the world both in captivity; and in the wild – I personally think “attack” is not in their vocabulary; and this is mostly because of their – you guessed it – slow pace movement!

As we all know they just hide inside their tough hard shells or probably use their thick skinned scaly spurs every now; and then to aid them whenever they would feel as if they are being threatened by predators in the wild which is perhaps the best defensive strategy. They literally carry their own shelter wherever they go which makes them live longer; and feel secure even if they don’t possess any significant striking or offensive skills compared to other reptiles or animals.

In the wild and even in captivity, sulcata tortoises love to hide and dig large burrows just to get away from the extreme heat of the sun especially for those tortoises living in dryer areas and harsh environments such as in the Sahara desert, rainforests; and woodlands where most sulcata tortoises can be found. Sulcata tortoises also possess some huge claws in their legs which makes them very important creatures in the desert environment that they lived in because since they’re the ones who can dig deep holes; other animals tend to share in that shading if they can’t come out because it’s too hot. Other desert animals like snakes, monitor lizards, iguanas; and other reptiles help one another in a way and even live in the bottom part of the burrows that’s about 60 feet deep. Most tortoises spend both cold and hot days under these burrows.

Is Sulcata Tortoise right for you? African Spur Thigh tortoises are semi – desert to desert species because they are the kind of pets that likes dry environments, but that doesn’t mean that you won’t provide them water or a cooling area. Since they are naturally adapted to a hotter temperature; they have found a way on how to survive despite the harsh conditions by only coming out if the temperature in the desert is just right which is usually around the dawn and dusk hours.

Nocturnal animals are those that are active at night while diurnal animals are those that are active during the day; but sulcata tortoises fall under the category of corpuscular which are species that are neither nocturnal or diurnal because most of the time they’re just staying under the burrow that they dug up using their huge claws waiting for the right time; and perfect temperature to come out and explore the outside world.

Is Sulcata Tortoise right for you? Sulcata tortoises are even-tempered reptiles that could share space with its kind and a few other turtle or younger tortoise species given that they are provided enough room to be housed comfortably. Many hobbyists aim to integrate many of their reptile pets in one habitat and though this is possible and often successfully accomplished by experienced keepers, tanks housing mixed-species of turtles or reptiles can be very challenging to keep clean, is quite costly and can also be time consuming.

Although sulcata tortoises are very friendly and seem non – threatening to humans, they can show aggressiveness towards other tortoise species especially when its territory is threatened or if food is not enough within the enclosure because it can obviously create a competition. It can possibly show its innate rage and prey upon other species if it is housed with other tortoises but as long as you provide them with more than enough space as they grow and give them a fair amount of food and other necessities to live a comfortable captive life, then you won’t have a problem with housing them in one habitat.