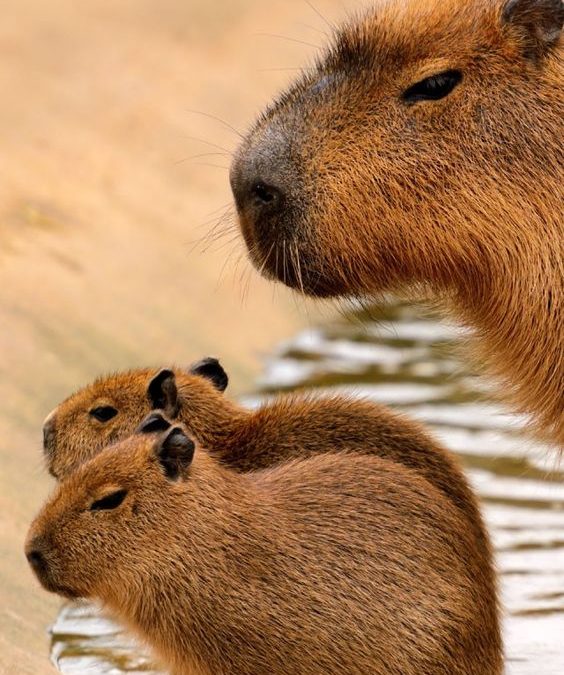 In October of last year (2015), a baby capybara was born in Chester Zoo, UK. And at only two-weeks old, this tiny rodent can already walk, run and even swim on its own.

Baby capybara are the world’s largest rodents; they’re semi-aquatic mammals that came from South America. They can be as large as dogs as they can grow up to 1.5m in length and weigh around 60kg.

Their scientific name actually translates to ‘water hog’ and their bodies have adapted specifically for swimming, which is evident in webbed feet, while their eyes, nose and ears are all strategically placed on top of their heads so they can see, hear and breathe easily while their body is underwater. In the wild, they avoid predators such as anacondas, caiman, jaguars, etc., by staying submerged in water.

Assistant Curator for the Animals of Chester Zoo, Dr. Nick Davis shared his thoughts about the new addition in their zoo.

The young capybara is still so tiny; it can barely be seen above grass when it walks around. It weighs just a few hundred grams, but it will grow to a hefty rodent in time. Dr. Davis said.

While capybaras are not listed as endangered species, they’re being hunted and poached for their meat and skin (for leather). “So it’s important that our new arrival helps us raise the profile of this often overlooked species.” he added.

Though capybaras look like beavers, they’re actually rodents, and the largest rodent there is in the world today. They are endemic in Central and South America, and they live near the water sources, such as lakes and rivers, swampy areas and ponds. A few years ago, their numbers have dropped due to uncontrolled hunting. Today however, their numbers in the wild have recovered, thanks to farming.