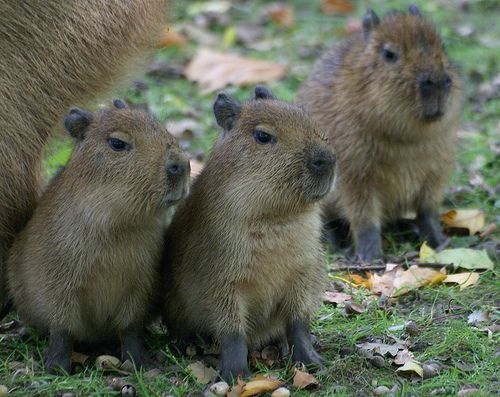 Capybara information: It’s scientific name is “Hydrochoerus hydrochaeris”, but they are given many different names in Central and South America. Some of the most common names are chiguiree, capivara, caprincho and ronsoco. In the past, they are even called water hog. Since the 16th century, these lovely animals have attracted the interest of explorers and writers to South America because of their size, sociability and relatively tame demeanor. Their species is the last surviving line of giant grass-eating rodents that have lived in Central and South America millions of years ago. Today, they’re the world’s largest rodent and they’re now being domesticated mainly because of their cute stature.

As semi-aquatic rodents, capybaras require constant source of water. In the wild, they live close to the marshes, swamps, lakes and rivers. They can also be found in the grassy plains or even in rainforests, where they can feed on soft roots, tree barks and grass.

They never stray away from the water source, and they quickly jump into the water when they sense danger. They’re well adapted to the water that they can hold their breath for up to five minutes.

In the wild, their herd average around 10 to 30 individuals. This however, can grow to more than a hundred during dry season. They communicate through scents and sounds, and they have unique vocalizations; they can squeal, whistle, bark or even grunt.

Capybara information are herbivores; meaning they only eat plants and plant matter. They usually eat grass and aquatic plants; as well as berries and different types of fruits. They also eat soft tree barks and grass.

They can be real fussy about their diet though; which usually consists 75% of three to six different types of plants. As with other rodents, they have two big front teeth which they use to grind food and grow throughout their lifetime. And like cows, they are also known to regurgitate their food and chew it again.

Capybaras eat their own dropping as well, which aides their digestion, as it helps breaks down their food, particularly the cellulose found in grass.

Their common threats in the wild are their predators, which are usually anacondas, ocelots, jaguars, pumas, harpy eagle, etc. Humans also poach them in the past for their skin that can be made into leather.

Due to their gentle nature, humans have learned to domestic capybaras. However, they have been poached for their skin and meat, causing a drastic drop to their population in the last couple of decades. Also, human activities in their region affected their habitat; human settlements have stretched all the way their area, and land clearance for agriculture certainly pushed them out of territory, as it affected their food supply. This is also the reason why some capybaras have been known to enter crop fields and cause great damage, causing people to see them as pets.

Though they’re still in the watch list because of their decreasing number in the wild, due to hunting, water pollution and deforestation, more and more people have started to breed them.

What is a Capybara?