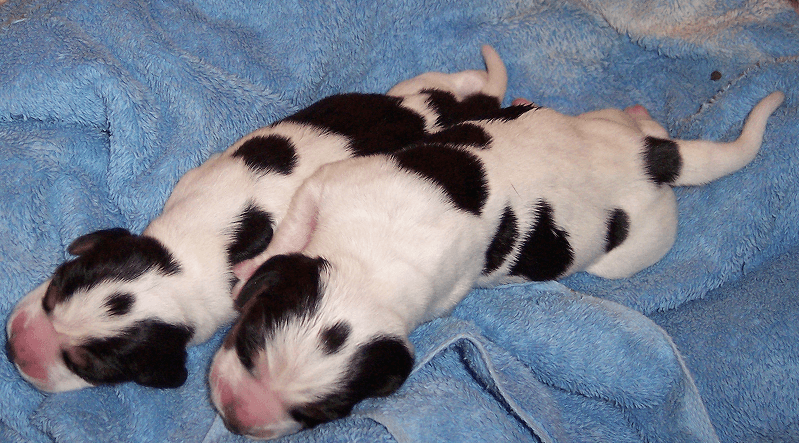 When it comes to basic dog breeding information, there are a ton of things you should have done before the actual breeding process.  A careful selection of the dame and the stud, for instance, which would include some background knowledge of their temperaments, their genes, and their overall health.  Make sure they have been medically certified as completely healthy by a professional. In this article, you’ll learn basic dog breeding information.

The next thing to do is to give yourself some good background information on the canine breeding process.  Make sure you have the space to devote to housing both stud and dam for at least two weeks, and that you can afford their care and the care of the puppies for the weeks after the little puppies are born well up until they are fully weaned.  Aside from food, the costs would include possible medical needs and vaccinations.  Needless to say, you should also have free time to be there for your pets.

The female Beagle’s average age of first heat is at 6 months.  This means that she is already capable of reproduction.  But if you think that it is just too young, then perhaps you had better wait a season or two.  Most experts do not recommend breeding immediately once she has her first heat cycle.  In fact, the AKC recommends waiting until the dam is at least 8 months old.  Some more conservative breeders even prefer waiting until she is at least 2 years of age.  Pregnancy can be a cause of great stress for a young Beagle. It’s best to wait until she has become more mature.  And not too late, either.  Many veterinarians will recommend a retirement age from breeding from anywhere around 7 years of age. Sometimes earlier, to avoid further compromising your Beagle’s health.

And try not to breed consecutively.  Some will breed every other heat cycle. Others will breed two heat cycles in a row before allowing a rest period.  Consult with your veterinarian – the dam’s health should always be a priority.

Signs of estrus or sexual fertility (the time of heat) can be recognized by a swelling of the vulva and some bloody discarge.  There should be some socialization between the dam and the stud at this time, to allow them to get comfortable with each other, hence the need for proper accommodations.

After about nine days, the female may be ready to accept the male.  This is the time of greatest fertility, and will last for approximately another nine days.  Most recommend breeding from the 10th to the 14th day as the peak fertile period.  Once breeding is successful, mating every other day may be advisable to be sure of pregnancy, up until the female ceases to accept the male, or for two or three more matings.

The process can take an average of 45 minutes all together.  At first, the male mounts the female from the rear, accompanied by rapid pelvic thrusts.  Once finished, they will not separate for another 10 to 30 minutes, during which they will be positioned rear to rear.  Don’t try to separate them during this time because it could cause injury to either or both of them.  They will part naturally once they are done.

The gestation period for most dogs lasts for an average of 63 days.  You can confirm pregnancy with a veterinarian after 28 to 30 days because some females will only be showing signs of false pregnancy.  Once you are certain that breeding was successful, you can prepare yourself for the pregnancy and the whelping.  Take good care of your pregnant Beagle at this time, being especially careful with her diet and exercise.  It is advisable that you discuss best practices with your veterinarian on their feeding and exercise schedules for the period of pregnancy.

Signs of impending labor are a change of appetite in the pregnant dam, and displays of some nesting behavior.  You should already have prepared a good and roomy box some time before, to which she must have already become accustomed.  Once her temperature drops to 99 degrees or lower, labor will not be far behind.  You will notice that she begins panting before the contractions.  The birth of each puppy will usually be preceded by panting and signs of straining or contractions.

Each puppy will come with its own placenta.  The mother will usually chew or tear at the umbilical cord to free the puppy, and then begin licking the newborn to stimulate its breathing.  If she neglects to do this, especially if it is her first time, you may assist her using a rough towel to clean the puppy’s face and nose until it starts breathing, and using dental floss to sever the umbilical cord.  Eventually, the mother herself may take over once she knows what is expected of her.  Have some iodine on hand for the cut ends of the cord to prevent infection.

Count the placenta.  There should be one for each puppy.  If the numbers don’t match, it may mean that one or more were left inside the mother, which could become problematic.  Call your veterinarian of this happens, or if there is any trouble with the mother or any of the puppies during whelping.

A full litter of the Beagle can number anywhere from 2 to 14 puppies.  Wait it out until the dam is finished, occasionally having the newborns nurse from the mother in between the arrival of the puppies.  This gives them the mother’s first milk, otherwise known as the colostrum, which will provide the newborns much-needed immunity from their mother.  And of course, don’t forget to encourage the mother in a positive way, providing her moral support, and keeping her well-hydrated during this time. We hope you learn a lot about basic dog breeding information.

Tips for Breeding Your Yorkshire Terrier

How Do Teacup Yorkie Give Birth?