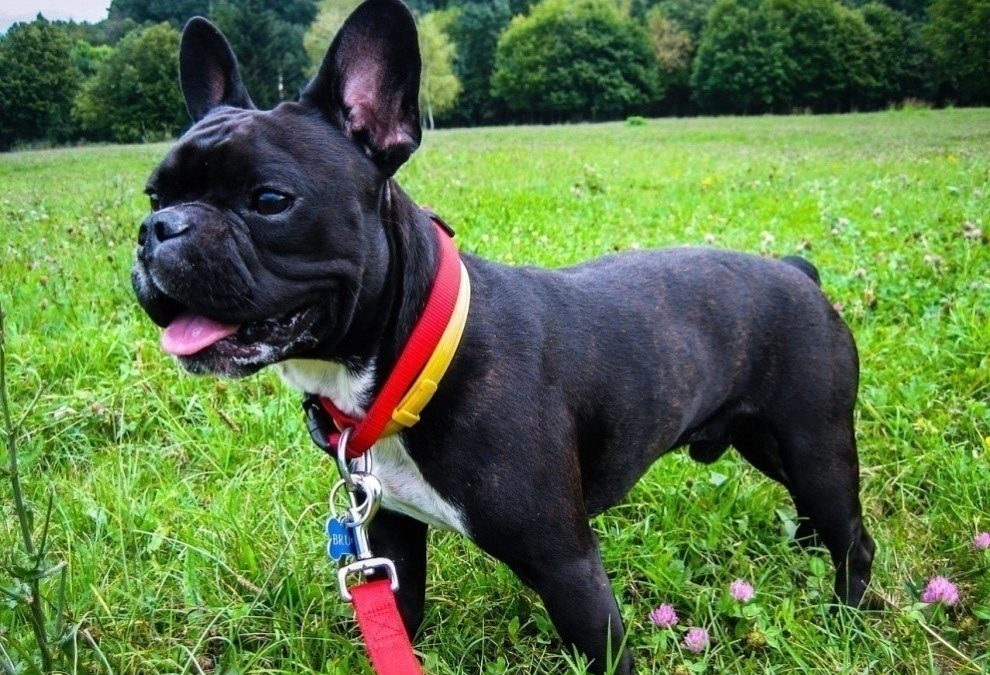 The most problematic flaw of French Bulldogs is their health. It is easier to deal with stubbornness and the difficulty of training rather than having to witness your dog suffering from illnesses and other conditions that could sometimes lead to fatalities.

Some of the common conditions affecting French Bulldogs include:

Just like humans, dogs can develop allergic reactions to a number of different things. An allergy develops when the dog’s immune system identifies a substance as pathogenic, or dangerous, and it launches an attack. The three main types of allergens can be inhaled, ingested, or taken into the body through skin contact. Dogs can develop allergies at any time and some breeds are more prone to allergies than others such as Cocker Spaniels, Terriers, Retrievers, Setters, and brachycephalic breeds like Pugs and Bulldogs.

Common symptoms of allergies in dogs include red or itchy skin, runny eyes, increased scratching, ear infections, sneezing, vomiting, diarrhea, and swollen paws. Some common allergens for dogs include smoke, pollen, mold, dust, dander, feathers, fleas, medications, cleaning products, certain fabrics, and certain foods. Surprisingly, food allergies tend to produce skin-related symptoms like itching and scratching rather than digestive symptoms. Chronic ear infections are also a common sign of food allergies in dogs. The best treatment for allergies is avoiding contact with the allergen. For some environmental allergens, your vet might prescribe antihistamines or your vet might give your dog an injection to protect him.

This condition is genetic that is developed through external factors such as over-exercising at a young age and obesity. Basically, this condition is a malformation of the hip sockets that will later on cause arthritis. It is a painful condition that will affect your dog’s gait. For hereditary conditions, there are no preventions. The only thing you can do is slow down the progression of the disease. You can do this by monitoring your dog’s exercise and physical activities and make sure that he only gets the right amount without potentially damaging the joints (e.g. refrain your dog from jumping), watching his diet; don’t overfeed him to prevent obesity and take care to give him a balanced amount of calcium.To save yourself the trouble, make sure your breeder presents you with proof that the parents of your dog have been screened for Hip Dysplasia and results yield negative. For treatment, there are different kinds of surgeries available depending on the case but the cost is appalling. Instead, you can settle for massage and physical therapy.

This syndrome typically occurs in dogs with flat faces and short noses, or elongated soft palates. It is a severe respiratory disorder that could be fatal if the dog is unable to keep up with the release of carbon dioxide in exchange for oxygen. This is caused by obstructed airways that are subject to more distress when the dog is over-exercised, stressed or left too long in the heat. Symptoms include labored breathing, vomiting, choking, snoring, prolonged and frequent panting. If your dog exhibits any of these signs, take him to the vet as soon as possible. A lot of bulldogs die because this condition isn’t taken too seriously and is commonly thought as just traits that come with the breed. Home remedies include a balanced healthy diet, staying away from heat, too much exercise, and using a harness instead of a collar so that the trachea isn’t constricted. Swimming and flying on planes are also strictly prohibited since the risk for instant death is extremely high. Treatment depends on the severity of the condition (e.g. cool temperatures, sedatives, intubation, surgery, etc.).

The Elongated Soft Palate abnormality is one of the causes of Brachycephalic Syndrome in which the elongated soft palate blocks the airway and makes breathing difficult for the dog. This is a congenital defect, thus, it cannot be prevented but it can be corrected through surgery. The same symptoms, treatments and home remedies for Brachycephalic Syndrome apply to this condition as well.

French Bulldogs are not built to endure heat, warm and humid weather. Because of their compressed airways, they have difficulty regulating their body temperature which could lead to a fatal heat stroke. It is important to keep your Frenchie in cool temperatures and to make sure that he has access to water at all times.

This is an inborn deformity of one or more back bones that is usually shaped like a wedge or triangle causing the spine to twist. This condition varies in severity and in mild cases signs are generally unseen. Meanwhile, in the worst cases, compression of the spinal cord can lead to pain, weakness and paralysis. Being a congenital defect, there is no known cause or prevention aside from responsible breeding. Decompression surgery is an available treatment.

Patellar Luxation is just a fancy (scientific) name for Kneecap Dislocation. Though it’s a birth defect, the misalignment doesn’t come about until they’re grown adults. This is common in small breed dogs and it can be seen when a dog has an uneven and unusual gait. Like hip dysplasia, this is a joint disorder which can also lead to arthritis. The severity ranges from mild to serious. In mild cases, the dislocation happens intermittently and the kneecap naturally realigns itself. In the most serious cases, surgery is required.

IDD is the occurrence of a rupturing or herniating disc in the spine which then thrusts into the spinal cord. This thrusting movement disables the nerve transmissions to mobilize along the spinal cord which may cause paralysis. IDD can be caused by trauma, age, or simply from a sudden jolt like a bad fall or a miscalculated jump. This disease is very painful and may render your dog weak and unwilling to move. Medical treatment typically involves nonsteroidal anti-inflammatory drugs (NSAIDS) that are specifically manufactured for dogs and keeping the dog in confinement where he will be unable to make big movements. Surgery for extreme cases can only be administered within the first day of the injury. Recovery and healing period after the surgery may take a few months and will also require both medical treatments.

This is a blood disorder that afflicts a lot of dog breeds, mainly involving the dysfunction of blood clotting. A dog suffering from this disease will exhibit signs of excessive and abnormal bleeding. Symptoms include nose bleeds, bleeding gums, persistent bleeding during and after surgery, and extended bleeding during in-heat periods or after giving birth. Sometimes blood is found in bowel wastes. This disease is normally detected between the ages of 3 and 5. The bad news is that this disease is incurable. The good news is that there are existing treatments to help your dog cope with the illness such as searing and stitching wounds and blood transfusions before undergoing surgical procedures.

What is Von Willebrand Disease in Dogs?