Home » Wallaby as Pets » Different Types of Wallabies, How they behave and Communicate in the Wild

Different Types of Wallabies, How they behave and Communicate in the Wild 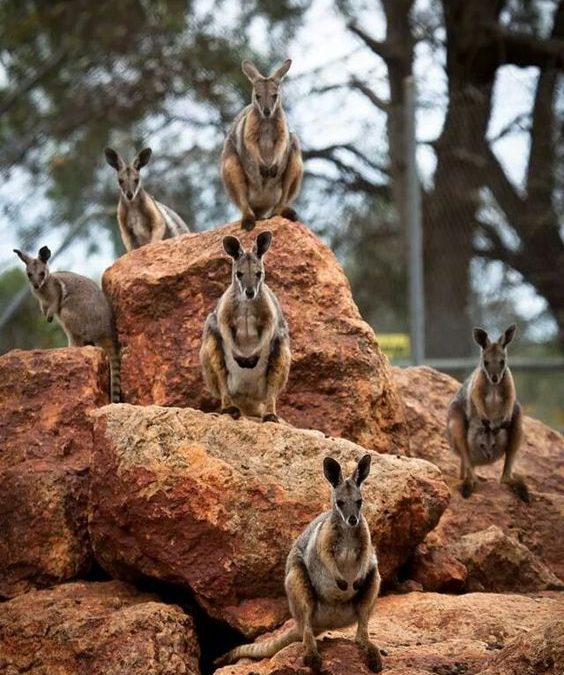 Kangaroos and wallabies share many different characteristics. For one, they’re both marsupials, meaning they are pouched animals – females of both species keep their young inside their pouch until they’re large and strong enough to survive on their own. And as with many marsupials, they’re both herbivores (plant-eating animals).

However, kangaroos and wallabies are very distinct from each other. The former is significantly bigger, as a matter of fact; the largest male red kangaroo can grow up to 6 feet tall with 3.5 of tail and weigh more than 200 lbs. Also, though both have powerful hind legs for leaping, kangaroo’s hind legs are significantly more powerful, as they’re known to jump as high as 6 feet and as far as 30 feet. Hence, the nickname “living pogo sticks.”

Wallabies on the other hand, are like the shorter and stockier cousin of kangaroos. The term “wallaby” is referred to any kangaroo with back food less than 10 inches long.

Different Types of Wallabies, their Habitat and How They Co-Exist with Others

There are about 30 different species of wallabies. Similar to the possums, wallabies don’t have a distinct biological group, which means they fall into several broad categories. Typical types like Agile wallaby, Black wallaby and Red-necked wallaby, are more closely related to kangaroos, and they have a lot common of physical characteristics, except of course for the size.

The smallest of them of them is the tammar wallaby and Parma wallaby, with the former commonly found in southwestern Australia and its adjacent islands, and the latter in New South Wales. Both species have heads and bodies around 20 inches long, with their tails a little longer. Tammar wallabies are distinct for their ability to drink salt water.

Rock wallabies on the other hand, are more like goats in terms of behavior. They also have soft fur that usually blends nicely in the rocky and dry surroundings of their habitat. They’re pretty agile, hopping across rocks.

Generally, they prefer to live in the forest, rather than semi-arid planes. Kangaroos prefer to dwell on the latter, as it’s suitable for their leaner, larger and more flat-footed feet.

The Whiptail wallaby is by far, the most sociable marsupial. They live in groups of 50 individuals, and many mobs can live in the same territory, making an even bigger population of whiptail wallabies.

Wallabies don’t make a lot of noise. But they usually communicate through grunting or making a hissing sound. Zoologists believe though wallabies use auditory and tactile methods to communicate, they actually prefer to communicate through visual and olfactory signals. However, when they sense danger, they adopt a frozen posture and make foot thumps (which sounds like a drum) of one or two beats, and sometimes accompanied with hissing or snorting sounds, to warn the mob of the potential threat. And like kangaroos, they use their hind legs to deliver powerful kicks to their predators.

Facts About Wallabies and Kangaroos, and Their Threats for Survival