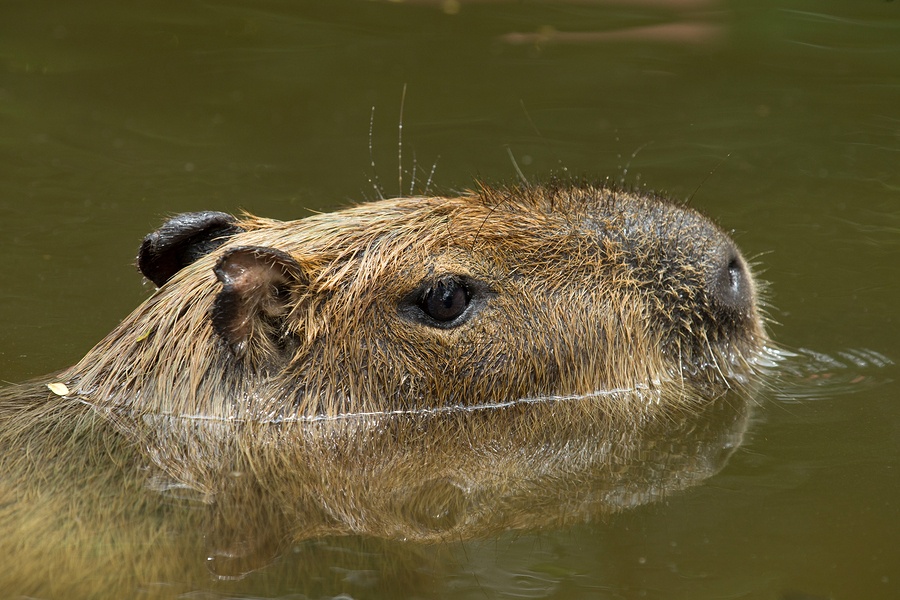 Like many exotic animals with unusually good natures, the capybara has been brought into the pet trade. Just because they are kept as companion animals, however, does not necessarily mean this is a good idea.

Before you consider adopting a capybara as a pet, you should carefully consider each of the following factors.

Because capybaras are semi-aquatic, they must have access to both water and mud. They prefer to defecate in water, and they use mud to cool down and to protect themselves from potential sunburn.

Although they can be taught to defecate in dry pans, they still must have enough water to submerge; and preferably to swim; which means owners should have some amount of outside space for their pets.

Domestication involves more than an animal simply living in harmony with man. The animal’s needs must be met in both a physical and emotional sense for the arrangement to be successful and mutually beneficial.

Capybaras are not just social, they are intensely social. They are as intelligent as dogs and crave constant companionship.

If capybaras are kept in a one-on-one relationship with a human; their separation anxiety will go off the charts if left alone. This is true even if you attempt to get the capybara to sleep alone at night.

These animals are most successfully kept in captivity in small groups outdoors. Capybaras are perfectly amenable to human interaction under these circumstances and are highly affectionate; which is why they have become popular in petting zoos.

Learn Well and Are Trainable

Due to their high level of intelligence; a capybara can learn almost anything from a patient owner with an understanding of how to train an animal. These creatures certainly can assimilate what is and is not acceptable behavior.

If they do not receive gentle correction and consistent discipline, a capybara with “inside” privileges will chew the carpet, gnaw the table legs; yank down the curtains; and come up with a whole host of equally creative and destructive “projects.”

They are remarkably anxious to please, however, so discipline really need be little more than obvious verbal disapproval.

If this is countered with loving praise for things done well or correctly; a capybara can acquire good “manners” rather quickly. This does not change the fact, however, that they do ultimately grow too large to be exclusively indoor pets.

Try to think of all communication with a capybara as a two-way street. They have a complex communication system within their groups built on vocalizations and body language.

When you become part of their “group” in captivity; a capybara will give as much information as they receive, asking for things they want or enjoy.

In teaching a capybara to do anything, consistent, patient repetition is best. They will respond to whistles, verbal directives, and treats.

They easily learn their names, and will perform various dog-like actions to get food including “twirling;” and standing on their hind legs.

There are many owner stories online about house training capybaras complete with photographs. There’s more than enough evidence of success in this arena to silence even the worst naysayer.

When you show one of these animals what to do, and are consistent with your instruction; they are typically quite happy to accommodate you.

It also does not hurt that they are, by nature, very clean and prefer not to soil their habitat, which is excellent if they’re living in the house with you!

Having a housebroken capybara works best, however, only when the animal is still small enough to practically live inside. As your capybara grows, it really does need to take its “business” outside.

Since some capybaras will only defecate in water, the growing scope of the potential problems should be readily apparent.

Owners can opt to offer their pets both wet and dry litter trays, but if the capybara wants to be in the water, you automatically have problems.

You’re talking about an animal that will weigh 77-146 lbs. (35-66 kg). A “pan” of water may actually be more like a “tub,” which means splashing, potential water damage to your home, and difficult clean-up and maintenance for the owner.

Again, just because the capybara can be taught to do something does not mean the doing of it is actually practical in the greater scheme of husbandry.

Ultimately, if you have a capybara, you will have to have outside space to keep the animal. This is not an apartment pet!

Capybaras can bite. In fact, biting is their primary defense. They should not be grabbed quickly, an action they interpret as threatening.

When your capybara has learned to trust you, you can approach the animal more directly. In the beginning, however, it’s best to let a capybara initiate most exchanges, especially those that are affectionate, which can make them problematic with overly enthusiastic children.

Capybaras do have distinct personalities. Some individuals will thus be more or less prone to this type of defensive or startled biting behavior. Overall, however, capybaras are gentle and not easily provoked.

Capybaras don’t dig, which is a plus in terms of preserving your yard, but as large as they are, these animals will squeeze through the slightest possible crack. They can also push through any kind of flexible wire fencing, so wood fencing is preferable.

Two capybaras can live well in a spacious backyard, but they must have plenty of room to run and play, places to hide, and completely secure fencing.

They must have access to water, so a pond is ideal. Depending on the climate, a shed lined with straw and potentially outfitted with a source of heat will also be necessary.

Under such circumstances, a capybara won’t actively seek a means of escape, but if one presents itself, the animals will take advantage of it. A fleet footed and potentially frightened capybara on the loose can be all but impossible to re-capture.

The question of gender is a standard one in adoption considerations for almost any species. This is not a relevant issue with capybaras, however.

The personalities of both genders are equally good, and the final choice of a companion should be predicated much more on individual personality.

Most pets develop mature natures that are more or less in concert with the kind of attention and husbandry they receive from their owners. A well-cared for capybara is typically a well-behaved capybara.

Capybaras and Other Pets?

Until your capybara reaches a sufficient size to defend itself, all interactions with other animals should be closely supervised. In all likelihood when you acquire your pet it will be about the size of a guinea pig or a large rabbit.

At a young age, either a dog or cat can seriously injure a capybara. The larger the animal grows, the less likely cats are to be interested, but aggressive dogs should be watched at all times.

Although less so than other rodents due to their size, it is still possible for other pets, especially dogs, to see a capybara as prey.

Typically, however, capybaras are gentle giants and get along quite well with other animals.

Garibaldi Rous, one of the Internet’s more famous capybaras that died in February 2014 was well known for his great affection for other animals, including a propensity for hugging cats.

As is often the case with the more unusual exotics, laws can be murky regarding capybaras.

In the United States, most states require that prospective owners apply for an import permit from the relevant state agency, generally either the agriculture department or the department of fish, game, and wildlife.

Before the animal can actually be brought into the state, it will be examined by a government veterinarian. This inspection will eliminate the presence of infectious diseases and evaluate the animal’s overall health and the quality of the care it has and is receiving.

In addition to the import permit, the owner will typically need to hold and maintain a general license to keep an exotic pet.

This ensures that the individual is accountable for the safe transport and maintenance of the animal, including keeping it in a proper habitat.

Similar laws apply to capybara ownership in the UK. Potential owners must acquire a license to keep the capybara, and should contact their local council for more information.

Applicants should be prepared for their homes to be inspected, and they must present a detailed care plan on which their suitability to own a capybara will be judged.

Putting an accurate estimated cost on an animal like a capybara is extremely difficult. If you can find an exotic animal breeder and purchase a captive bred capybara, you will pay around $600 / £360.

If you have to purchase and import a capybara from South America, the price may not be substantially different for the animal itself, but shipping and associated expenses can range from $3,000-$8,000 / £1,804-£4,811.

Pros and Cons of Capybara Ownership

Since these factors could be considered positive or negative based on your own individual perception, I simply want to reiterate some major points in this list.

– They do shed, but only a few single hairs at a time. The hairs are wiry and very easy to vacuum up.

– Capybaras have no odor.

– While they are agreeable to interaction, it’s best to let them initiate the contact.

– Capybaras do not like to be grabbed, and can sometimes be frightened by an unexpected hug.

– They are not aggressive by nature, but they can bite if they are frightened or feel threatened.

– Capybaras need access to water in which they can submerge themselves and to mud.

– If they do not have access to mud, they can sunburn.

– Capybaras prefer to defecate in water, but will generally be agreeable to using a dry pan.

– They are herd animals and should at least be kept in pairs.

– Capybaras do best when kept outside with adequate access to sunlight to maintain the health of their bones.

– They cannot synthesize Vitamin C and are thus susceptible to developing scurvy.

– They are expensive pets, costing at minimum $600, while travel expenses for importation can cost thousands of dollars.

Daily Care of a Capybara