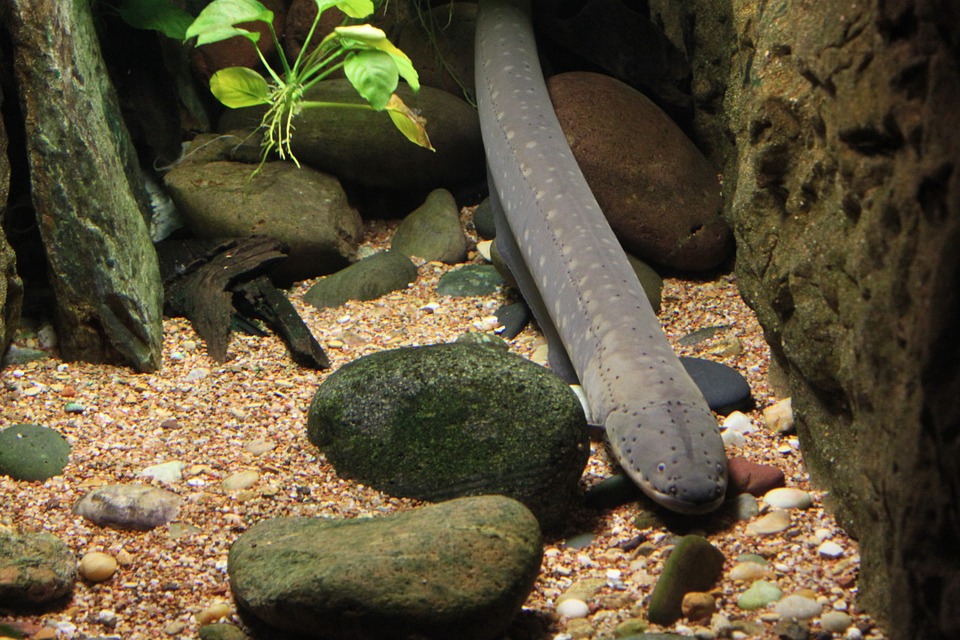 Aquarium eels belong to the eel like fish. They have long snake-like bodies and have similar feeding needs. Aside from that, they are very clever. One of its main characteristics is being an escape artist. They like to wiggle around even in the smallest hole in an aquarium cover. Fish that are referred to as “Freshwater Eeels” in the aquarium often include different eel like fish families. Some true eels could be found in the order of Anuilliformes, like the American Eel and the European Eel which belongs to the family of Anguillidae, and even the Worm Eels or the Spaghetti Eels that is a part of the Moringuidae.

You could still consider eels as eel like fish even though they are not true eels. This list typically includes the Spiny Eels belonging to the Mastacembelidae family. They are not really eels but they still look like them. There is also the famously known Electric Eel Electrophorus electricus. This too is not the true eel. The aforementioned eel is actually the Naked-backed Knifefish that belongs to the Gymnotidae family. We have included it here due to its eel like fish name. We also have what we call the fascinating Rubber Eels. These Eels are actually aquatic amphibians. The coming eel list would include all the popular types of eel like fish as well as aquarium eels, we will also include well lesser known varieties. The guide would include the description of the species as well as habitat, behavior, place of origin and the needed fish care in order to successfully maintain them in an aquarium. We have also included some examples in the fish guide to help with the proper identification and would aid for you to choose the best type of Aquarium eel. It could be the brackish or even the fresh water fish tank.

The long snake-like body is one of the key characteristics of the eel like fishes. They are mostly without a separate pelvic and dorsal fin, but they would have their fins look merged together and a tail fin to form a continuous fin fringe. Most of these fish have small gill opening, sometimes they have a single gill slit at their throat. Eels may vary in size but they are very average in size for most species. They can be between 30 and 90 cm in length. In their native region, they are known to be a portion of good tasting food.

The Anuilliformes Order of eels is the only true order of the fish classification in terms of being true freshwater eels.

The aforementioned order of eels contains two families of the freshwater eels. These families are the Moringuidae and the Anguillidae.

The first family has only one genus, the Anguilla. It contains 19 species and 6 subspecies. In this list belong the American Eel Anguilla rostrata. They are known to be known to be the only true eel of the North America and the European Eel Anguilla anguilla. These two true eels like to live their entire lives in freshwater but could return to their ocean to spawn.

Moringuidae, the other family in this category, contains the Spaghetti Eels as well as the Worm Eels. They contain 14 species that are contained in two general types. The freshwater eels have a long, skinny cylindrical bodies and ranges in size.The size starts from less than 6 inches up to 55 inches. These eels are typically found in shallow tropical waters around the world.

The other family of the aforementioned order of eels is the saltwater eel. It would include the Moray eels that belong in the Muraenidae family.

Some of the known “true eels” belonging in the Muraenidae family could be kept in freshwater as eels. This fact holds true because they can live in both saltwater as well as freshwater environment during the different times of their lives, just like the popular Snowflake Eel. However, this kind of eel is typically sold as the saltwater eel.

Not So True Eels

Some aquarium eels are classified as not true eels, or they are so-called the ‘freshwater eels’. However, they still belong to the eel like fish category in the aquarium industry. Other eel like fishes would include:

The Swamp Eels are members of Synbranchiformes Order has contains 3 families.

Electric Eel Electrophorus electriicus is also well known. However, this electric eel is not considered as a true eel, but this is actually a Naked-backed Knifefish that belongs to the family of the Gymnotidae. We have included this here because of the name “eel” is inserted.

Those cute yet fascinating Rubber Eels are really aquatic amphibians!

There are also some other fish that are often called  as eels but are not really eels. However, these fish does not have the word ‘eel’ in their common name. Some of these could include the critters such as the Ropefish and Bichers, Eel Catfish, Knifefish, Slimy Eels, and even the Lungfish. Most of these things have their own categories.

Both the eel like fishes as well as eels are carnivorous. They get active during the evening or after dark. Other than that, they are mostly bottom feeders. They would eat live food such as the mosquito larvae, small crustaceans, worms, and fish. Some of the fish would include the Freshwater Eel and the Spiny Eel.  The former is known to be carrion eaters that can easily adapt by eating freeze-dried and frozen proteins such as the bloodworms and the tubifex. Your eel only likes to eat a couple of times a week and some might even refuse to eat if you give them food to eat. They would eat only every two to three weeks.

Even though it is quite difficult both the eel like fishes and eels easily adapt to most aquarium conditions. In the most part, these fish are bottom dwellers, but many of them are able to breathe air at the direct surface from the atmosphere. Some of these eels are great jumpers and some of these are excellent escape artists. Some like to go through any available hole in their aquarium cover. They are great jumpers and can breathe air easily, the Swamp Eel is known to cross a lot of land area in a short period of time!

Eel like fishes as well as eels like to hide in holes or caves but they also need a lot of space for them to swim. Spiny Eels, as well as many of the species like to burrow in their substrate. Most of these eels are either naked or have small scales protecting their bodies so it is important that the substrate is soft, such as peat or fine sand. You could have a dimly lit aquarium or have floating plants to subdue the light.

How to Choose the Best Saltwater Fish Tank?