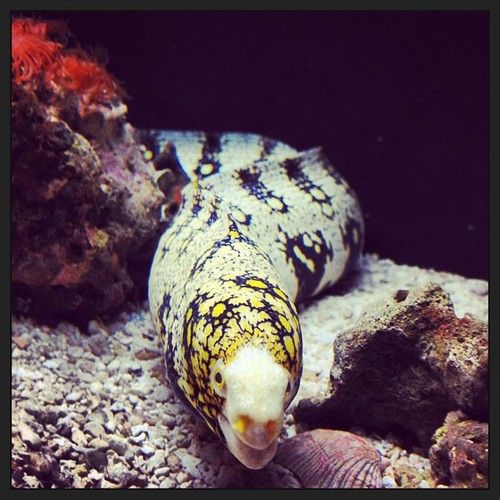 Eels are best known for their elongated shape that resembles that of a snake. Hence, there is a lot of question on people’s minds about which species the eels belong to: reptile or fish? This guide will provide you the information you need to know about eel is a fish and the various types of eels that exist.

An eel is a fish that is part of the order Anguilliformes. There are many suborders, families and genera under this order. Hence, you can refer to many different types of eels when you refer to the name. It is also used to describe other fishes that are similar in shape, such as electric eels or European eels. However, calling them eels is a misnomer because they do not actually belong to the order of Anguilliformes.

The most distinctive feature of eels is their elongated shape. An average eel measures about 5 centimeters to 4 meters in length. The average weight of adult eels starts from 30 grams to 25 kilograms. Eels are able to swim underwater by producing body waves that allow their bodies to travel. They also have the ability to swim backwards by simply reversing the waves’ direction.

The earliest life form of eels is that of flat and transparent larvae. From there, they drift to the sea surface wherein they feed on marine snow that often floats on the surface of the water. The eel larvae go through a metamorphosis wherein they turn into elvers before becoming the full shape of an eel. Most eels thrive in freshwater conditions and even have the ability to travel upstream.

When it comes to cuisine, there are two types of eels that are often used in Japanese cuisine: marine and freshwater eel is a fish. You can identify the use of eel by dishes that have unaju and unadon in their names. They are popularly used in modern cuisine but are highly expensive.

Among all species of eels, electrical eels have garnered the most attention. Despite their similar appearance to eels, they are not actually eels. They are often scientifically classified as belonging to the same species as carps and catfishes.

Electric eels, like eels, are also naturally predators that thrive in freshwater. The name is derived from the fact that they generate an enormous amount of electrical charge. They use this ability to stun their prey. The body of an electrical eel consists of over 6,000 specialized cells known as electrocytes. This is responsible for storing power – it acts like a battery. When they want to attack on a prey, the electrocytes will discharge a burst of electricity simultaneously. All 6,000 cells can therefore produce an electric charge powerful enough to disable the prey.

The origin of electric eels was traced to the Amazon and the murky rivers of South America. They feed mainly on fish, birds, amphibians and small mammals. Even though they have poor eyesight, they emit small electrical charges that act as radar. This enables them to spot preys within their range. As for human deaths, there exist no records yet of fatality resulting from electrical eels. But it can be dangerous when humans are jolted by the charge emitted by an electrical eel, especially in the water, as it can lead to drowning or multiple shocks.