Fire Belly Toads in the Wild vs. in Captivity 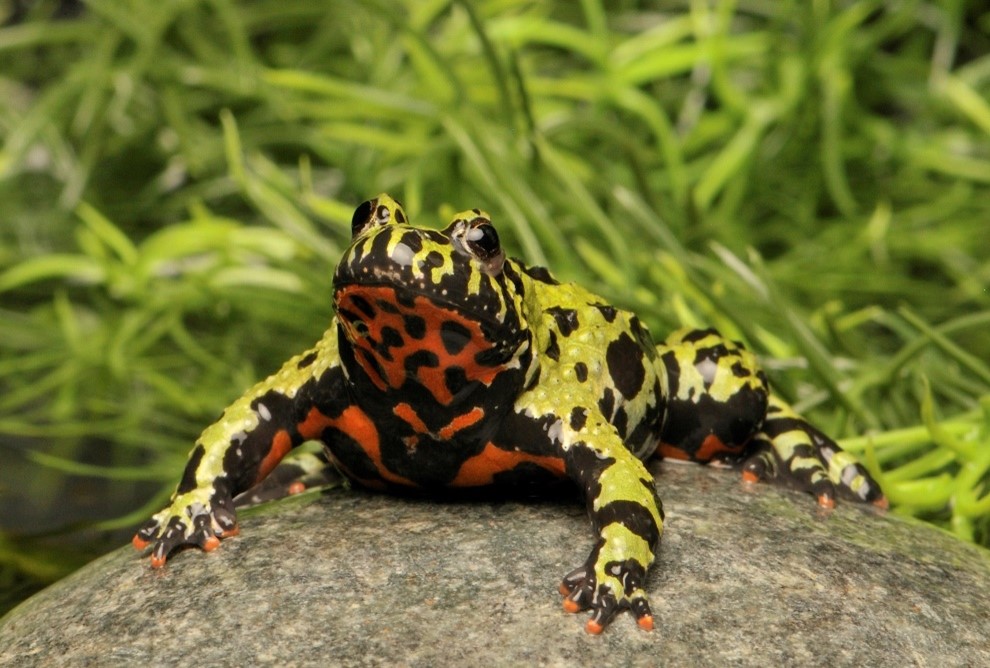 In their natural environment out in the wild the fire belly toad has been noted to be able to flourish in nature as it lives, exists and feeds off the bounties of their territorial range with a lifespan of a little over decade – and a few years if it is lucky. The fire belly toad in its natural habitat and territorial location is seen to be an opportunistic eater whose appetite is triggered by movement. The possibilities of the fire belly toad not having enough to eat shouldn’t be a problem for them since they chose to be where the conditions are rife for a plethora of food choices available to the toad for its dining pleasure.

Out in the wilderness and in the midst of their natural habitat the fire belly toads are in plain sight and are vulnerably exposed to a variety of different situations which a captive fire belly toad would not have the misfortune of experiencing given that it was bred in captivity.

When in captivity, the burden of food sourcing falls on the frog-keepers shoulders, and it is up to the amphibian keeper to provide the frog with a variety of food choices. Readily available and able to aptly provide the bulk of food of the fire belly toad’s diet are crickets. Offer each toad about two to six pieces of crickets a minimum of once a week and a maximum of two times a week.

The possibility of not being able to meet it nutritional requirements is slim to none in an area rich in the fares the fire belly toad favors. The alarming reasons of nutritional lack stem largely from fragmentation or loss of wetlands is due to infrastructural intervention. Once disturbed, these semi-aquatic frogs will have to move away to find better sources of food and habitat, exposing them to the dangers of predators.

Lacking food to eat, vital to its strength and wellbeing, the soundness of its health is greatly compromised. Not getting its required balance of nourishment does not result in immediate starvation but a continued basis of food deficiency will make the fire belly toad vulnerable to a host of maladies, diseases. Fire belly toads not only share territorial hunting grounds with other fire belly toads, but also with other semi-aquatic reptiles and amphibians like lizards, newts and salamanders which favor closely similar dietary choices. In addition to the competition the Bombina Orientalis has to contend with for the same types of bugs, it is also in danger of predators which do not lurk too far from their favored digs and which are drawn to the places where the toads are known to inhabit. Having to deal with predators and the stresses of escaping is reason for the tiny amphibian to become anxious and hyper alert.

The list of predators which prey on fire-bellied toads is long from snakes, cats, foxes, lizards, and birds along with a few species of large fish and some water snakes. The egg clusters female fire belly toads lay in the water, as well as tadpole hatchlings unfortunately have their own sort of predators underwater.

Illness and malaise in the wilderness is another challenge fire belly toads will have to experience by themselves without medical attention; a situation that their captive cousins will hopefully not have to endure. Disease and sickness acquired in their natural habitat is a reality of the fire belly toad when in the wild. Out in its natural territory a sick or diseased fire belly toad has no possibility of being given medical attention or treatment. The ailing fire belly toad will just have to put on a brave front and live the remainder of its life suffering from the illness in silence as it tries to get away from the animals which prey upon it.

In comparison, the lifespan length of the fire belly toad, when in captivity, notably increases due to the availability of medical care when attended to by an expert herp vet. The presence of a keeper who is mindful of the minute changes in behavior of a sick captive fire belly toad a higher likelihood of getting the medical care it needs, increasing its chances of survival, as well as living healthy and well. Having keeper guardians attend to providing them sustenance and attending to their daily needs, captive fire belly toads are spared from going through the often harrowing challenges and frequently dangerous settings of their natural habitat in the wild. Fire belly toads in captive care can reportedly live up to 15 years, with some keeper reports of their B. orientalis wards enjoying long lives of up to 20 years, given optimum care.

Why Do My Saint Bernard Dogs Like Belly Rubbing?