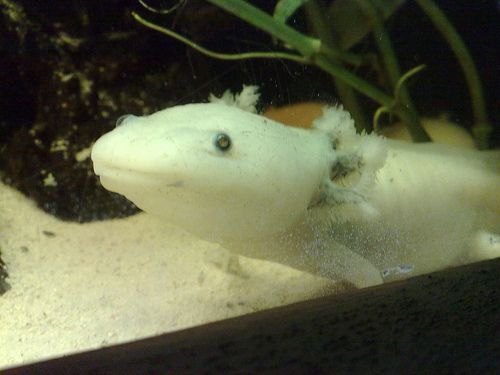 Mexican Axolotls are called the ‘Peter Pan’ in animal kingdom because of their unique characteristic of keeping its juvenile/larval form even when reaching sexual maturity. Also, unlike other salamanders that dwell on land when reaching their adult stage, Mexican axolotls spend their whole life underwater. And like other salamanders, they have the cell regeneration property, which means they can regenerate skin, limbs, organs, etc.; when amputated and grow their body parts back to normal, without any sign of the injury such as scars. With this, they’re popular animals kept in schools, labs and households as pets. Unfortunately, because of this, along with other contributing factors, there are very few Mexican axolotls left in the wild; putting the name of their specie in critically endangered list.

The ‘Peter Pan’ of the Animal Kingdom is Going Extinct, and the Future is Bleak

The primary contributing factors of this is the destruction of their natural habitat. As Mexico City expands, and more and more housing are being developed; the waterways pollute the Lake Xochimilco and rivers connected to it, where these animals live. The reduction of water quality is the main contributing factor in the decline of population of axolotls.

Also, the introduction of invasive species like tilapia and carp are pulling their numbers down; as these animals don’t just compete with their food, but also eat axolotls, including their eggs.

The long-term survival of this animal in the wild has become critical; and scientists have been demanding for urgent action to restore their habitat for years.

As the city of Mexico increase its size, the natural habitat for this animal dramatically reduced. Most of them stay on natural springs that supplies clear fresh water.

Though scientists admit it’s hard to get the accurate number of the current population of axolotls in the wild; new evidence suggest their number has plummeted in the past couple of decades. In 1998 for example, reports suggests there were around 6000 Mexican axolotls per square km. in Lake Xochimilco.

By 2004 that number declined all the way down to 1000 per square km.; while in 2008 only 100 of them have survived in the same equivalent area. Researchers estimate there are only 700 to 1200 axolotls living in the wild.

As of today, a team of scientists led by Dr. Luis Zambrano from National Autonomous University are embarking on a critical program that seeks to create better wild refuges for these animals, with hope to stop the decline of their numbers and prevent their specie from going extinct in the wild.

Why Are Axolotls Endangered?