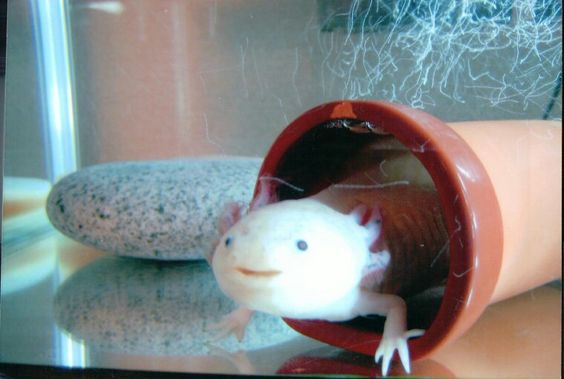 Mexican Axolotl or scientifically known as Ambystoma mexicanum, and pronounced as ‘ACK-suh-LAH-tuhl’ is a very fascinating creature. For one, it’s a salamander, which belongs to the class of amphibians that spends their whole life underwater. It’s a very rare trait, as not many amphibians and salamanders stay their whole life in water, as they undergo metamorphosis and develop into adult stage. Scientists call this characteristic of axolotl ‘neoteny’, which means the existence of juvenile features in adult animals.

In axolotl’s case, neoteny is found in their retention of their gills, which kind of looks like a weird and funny hairdo. Their external gills protrude on the back of their wide head, giving them a cute Pokemon-like look. They also retain their dorsal fin, giving them a tadpole-like appearance. And age only gets them bigger. Neoteny however, doesn’t affect the animal’s ability to breed. Males and females mate, and females lay their eggs underwater.

Axolotls are close relatives of tiger salamanders, but the former can be larger, and reach up to 30cm in length. Their average size is closer to 15cm. Most axolotls are black or mottled brown, while there are white and albino varieties, which are often used as pets and captive specimens.

What’s even more amazing about axolotls is that, this cute and harmless animal can live up to 15 years.  They’re carnivorous, and usually eats crustaceans, insect larvae, worms, mollusks, some fish, etc. As a matter of fact, they eat whatever they can fit in their mouth, as they eat by sucking water to their wide mouth. Those who keep axolotls in a fish tank as pets are fed with California blackworms, brine shrimp and salmon pellets. And when hungry or stressed, juvenile axolotls can be cannibalistic, and eat limbs of other axolotls. Also, when kept in a fish tank, they may eat pieces of gravel, which can be dangerous for their health and may result to death.

Axolotls are also often called ‘Mexican salander’ as they can only be found in Mexico, particularly the complex of in Lake Xochimilco, near Mexico City. This animal differs from most salamanders, as they predominantly live in water. Though in very rare cases, they are forced to develop mature characteristics and emerge from the water. In most cases however, they are content on staying on the bottom of canals and lakes.

As Mexico City develop into a highly urbanized metropolis and affect lakes and various water systems, the population of axolotls significantly declined over the years. Also, the introduction of other animals that compete with food in their ecosystem, such as carp and tilapia, greatly affected their number. As a matter of fact, a survey conducted in 2009 suggests there are only fewer than 1,200 axolotls living in Lake Xochimilco complex, putting the specie in critically endangered list.

Scientists have been fascinated with this creature for decades, as they exhibit amazing ability to regenerate lost body parts. And with that, they’re one of the most scientifically studied salamanders.