Home » Primary Menu » What Are Some Interesting Facts About the Samoyed Dogs?

What Are Some Interesting Facts About the Samoyed Dogs? 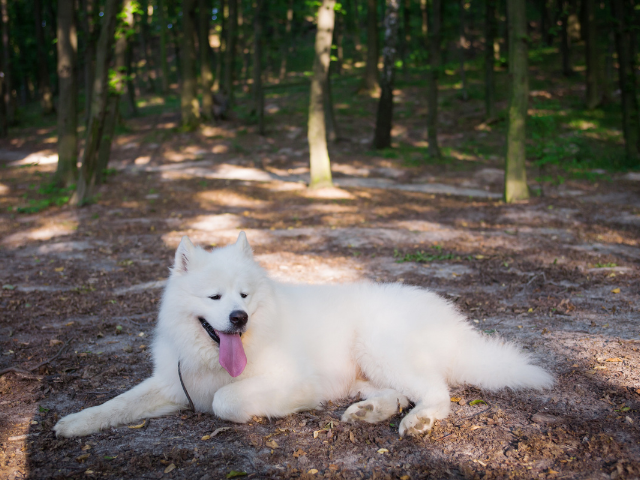 There is just something about little ol’ Sammie, isn’t there? That smile, the beauty and grace, and the dignity that these dogs possess makes you wonder; if there isn’t something unique about this dog breed that sets them apart from other dog breeds. And there is, in a way. In this article, we take a look at some of the more interesting facts about the Samoyed dogs.

Samoyeds are a happy, friendly breed

Those naturally upturned corners of the Samoyed Dog’s mouth almost make it seem like he’s smiling, doesn’t it? You might think that it is just a coincidence; or that we are simply projecting human-like attributes to our canine companion. But perhaps it is not such a big coincidence, after all. This breed has a notoriously friendly and affable disposition. They get along quite well with their human family; as well as other dogs and are great companions and playmates for children. They can get pretty rambunctious though, so should not be left unsupervised with toddlers and very young kids.

Popularly known as the “Samoyed smile,” or the “Sammie smile,” for short, that natural smile makes this breed extremely photogenic; especially when you factor in the beautiful line of their bodies and their attractive coat. You would be hard put to locate a picture of a Samoyed; that makes them look anything but the stunning breed that they are.

The Samoyed is an ancient and basal dog breed

Basal means “root”, and to say that a dog breed is a basal breed means that the breed was used to influence the genetics; and crossbreeding of more modern-day breeds. Most modern dog breeds are the result of intentional crossbreeding by breeders aiming to create a breed-mix that suited their purposes; or that eliminated the weaknesses and emphasized the strengths of several breeds in the resulting mix. The basal breeds are the core breeds used to influence the genetic lineage of other, newer breeds; much as you would trace the resulting characteristics of offspring to their parents in the typical genetic exercises in science classes. The Samoyed, in effect; would be one of the “parents” – although this is a somewhat simplistic way of looking at it. Practically speaking, this means that that Samoyed’s base, genetic makeup runs through many of today’s modern breeds.

The Samoyed dog breed is also ancient, and this is quite literal. They take their name from the Samoyed people, a nomadic ethnic cultural group from Siberia; who originally bred these dogs to herd reindeer somewhere in Northwest Russia and Western Siberia. This was more than three thousand years ago; making the Samoyed dog breed one of the oldest dog breeds still existing today.

And to add yet another interesting fact into the mix, the Samoyed dog breed is also a spitz breed; distinguishable by their triangular ears, pointed muzzles, long, thick; and white fur, and curly tails – rather similar to the physical features of wolves. It may not be pretty improbable to say that there is a bit of wolf blood in the Samoyed. The DNA of an ancient fossil of a wolf-dog hybrid discovered in 2011 was once tested; and found, to bear close relation to the Samoyed. This may not answer the question of whether dogs are descended from wolves; but at least for the Samoyed, we are reasonably certain that they are at least partly descended from wolves. This is likely as ancient as a dog breed can get.

And they do show it in some of their characteristic traits, too. Not only are Samoyeds pack animals, they are also pretty finicky. They can groom themselves in a way that you would expect a dog would, who didn’t have access to modern day human grooming implements; but still wanted to keep themselves clean. Not that you don’t need to groom them, of course. If anything, knowing their propensity for cleanliness might encourage you to be more enthusiastic in their grooming rituals; knowing that the Samoyeds themselves might actually enjoy it.

The Samoyed Dogs were originally used to herd reindeer in Siberia, and then some

After such a long existence, the Samoyed dog breed certainly got around. This is a herding breed, and their original job was to herd reindeer. The Samoyed people were nomads, so when they moved around, the reindeer they kept needed to be kept close. Enter the Samoyed dog. Herding does seem to be a very basic instinct to this dog breed, as even today; may owners of Samoyed dogs could probably testify to their dogs herding the young children in the family.

And in the cold regions of Russia and Siberia; where keeping warmth was crucial, the double coat of the Samoyed dog breed that kept itself sufficiently protected against the elements was also utilized by the Samoyed people. The fur shed by the dogs were used and even traded as wool. If Cruella de Ville were anywhere near as utilitarian, she would have had her dog-coats without having her tragic villain ending. By contrast, the Samoyed dog breeds were apparently treated exceedingly well by their original owners; which probably goes a long way to the Sammie smile they now wear today like a habitual smile. Life, or at least humans, was never quite so cruel to these beautiful, adorable pets.

If anything, they’ve had brief stints with a few historical celebrities, too. Many polar explorers used the assistance of Samoyed dogs as both guides; and sled dogs to navigate over the difficult, unfriendly terrain of the Arctic; including Norwegian explorer Roald Amundsen who led the very first expedition to the South Pole in 1911.

The Samoyeds were apparently popular gifts given by the Russian royal family. And Queen Alexandra of Denmark, who later on became Queen Consort of the United Kingdom from 1901 to 1910, was fascinated by the Samoyed dogs, and became a devoted supporter and enthusiast breeder.

These days, they make wonderful companion pets and guard dogs. While they can certainly bark, they also have a beautiful howl reminiscent of wolves. If you have them on a farm, they can still earn their keep with their hardwired herding instinct that just naturally kicks in. You have to remember though, that this is a breed that was born and bred in the rough climate of remote Siberia. They are uniquely suited to harsh, cold, even below freezing temperature. They won’t do quite so well in more temperate weather, especially with their thick coats.

The breed evolved in isolation

Despite having been in existence for near 3,000 years; the Samoyed dogs were only introduced to England in 1889, by the explorer Robert Scott; and from there, the Samoyed dog breed’s popularity spread. A few years later, or in 1906, the AKC recognized the breed. Before that, the breed pretty much lived with their nomadic families. And due to the nature of the harsh and often isolated terrain; these dogs didn’t get to see much of the rest of the world.

The result, however, was that this breed became uniquely adapted to survive in such harsh conditions. They also learned to co-exist with their human families to foster cooperation; and mutual survival, sometimes sleeping with their owners for the extra warmth it gave their human families. But perhaps most interestingly; they were spared the activities of outside breeders who may have attempted to crossbreed the Samoyeds with other dog breeds. Such unique isolation is probably one of the reasons why such an old dog breed has survived; and still remains distinguishable from the more modern dog breeds, to this day.

The Good and The Bad on Raising a Samoyed Dog

Are Samoyed Dogs the Right Breed for You?

What Are Some Interesting Facts About the Bouvier des Flandres?