Home » Capybara » What do Capybaras Eat? 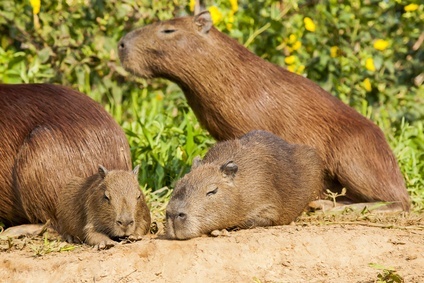 Also referred to as Hydrochaeris hydrochaeris Capybaras are about 50 cm or 1.5 feet tall at the shoulder and approximately 130cm or 4 feet in length. They weigh about 35 to 70kg. They are the largest rodents on the planet. These creatures are semi-aquatic who spend most of their time in water. They are found mostly in South America and Southern Central America. The name capybara comes from the Tupi language native to Brazil. The name means “one that eats slender leaves”. This may have as well answered the question what do Capybaras eat? Nonetheless there is more to learn about these creatures.

Capybaras are able to remain submerged in water for up to 5 minutes and they become easily dry after being in water due to their thin coat of course hair. Their babies are not good swimmers at first and usually stay on land hiding. This makes them susceptible to predators such as feral dogs, foxes, piranhas, and vultures. They normally spend most of their day, if hot, wallowing or inside water. They feed when it is cooler mostly in the morning and evening.

Capybaras inhabit South America. Since they are semi-aquatic species they dwell mostly in the wetter parts of the continent such as Venezuela or Brazil and are also spread throughout the entire continent.

Capybaras prefer water-rich or muddy areas as their dwelling places. You will find them living next to water or muddy rivers and when resting they go to dry grounds. The water provides food and protects them from predators.

These creatures are interesting to observe. They live in groups of about 10 individuals in wet seasons and 20 to 30 when dry. You may even observe, if lucky, a group of up to 100 capybaras.

What do Capybaras eat?

The main capybara diet includes grass and aquatic plants. They consume approximately 3kgs of grass on a single day. They tend to be selective depending on the seasons. For instance, during the wet season when there is plenty of food, capybara will mostly eat specific grasses. During dry seasons when food is scarce they invade cultivated lands making them enemies of agriculturists.

These creatures being social animals live in groups with one dominant male, a number of females, and young ones. The dominant male is more noticeable in the group since it is the largest. Other males act as subordinates who mainly act as lookout for the group sending warning signals when predators approach.

The dominant male within a group of capybaras enjoys great privileges. Being at the centre of the group he is much safer and less susceptible to predators. He is also the one who mates with all the females within the group. These creatures are extremely fascinating to study and observe.

Where Do Capybaras Live?

What You Need to Know About Capybaras

How to Care for Capybaras