Home » layout » Why Does My African Grey Bite?

Why Does My African Grey Bite? 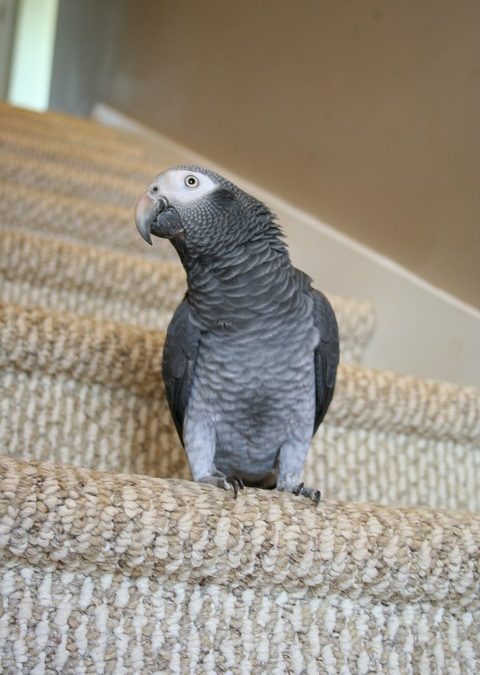 African Grey parrots don’t typically bite each other in the wild; just the same, biting behavior is not normally seen even in captivity. However, there are some instances wherein African Greys, like other pet birds, turn to biting their owners. It is not an intrinsic problem; instead, it typically stems from behavioral issues. This means that there is hope for correction of the behavior, to the benefit of both the bird and the owner.

Biting in African Greys is a learned behavior. Just because your African Grey bite doesn’t mean that it is naturally mean or aggressive.  In order to get started on correcting the biting behavior, you as the bird owner first have to understand what triggers it in the first place.

If you were a bird, what could possibly compel you to bite a human? There may be changes in your environment that makes you feel unsafe. You may have come from a place where it’s scary and hard to trust humans.

There are a variety of factors which could have led to biting. Depending on how the human responds to the first instances of African Grey bite may then continue to develop this as a habit that the human would have to work on to break.

Here are a few common causes of African Grey bite:

Fear is one of the most common reason for aggression in the animal kingdom, and this holds true for African Greys as well. If they are hurt or afraid, the flight-or-flight response is triggered naturally as instincts take over. In the wild, it’s easier for African Grey parrots to pick “flight” and fly away when something startles or terrifies them. In captivity, however, that’s difficult to achieve, which is when they may pick “fight” and attack instead.

Even an African Grey that has been hand-fed as a baby can still develop wariness of humans, especially if it hasn’t been socialized consistently. For adult African Greys, the fear may also stem from past trauma or bad experiences in previous homes.

If you think fear is the cause of your African Grey bite, you have to learn to be patient in earning its trust. The fear may seem illogical to you as a human who just wants to care for your pet bird, but you have to consider the situation from its perspective. After all, it doesn’t understand human logic, and thus the burden of making changes and accommodating its particular needs falls on you.

Figure out what makes the African Grey afraid. Once you’ve discerned what caused the fear, you can address it in either of two ways. One is to avoid exposing your African Grey to it, which is often the simplest option. For instance, if your African Grey parrot is afraid of vacuum cleaners, you simply have to take it to another room when you’re vacuuming.

If complete avoidance isn’t possible, then you’re going to have to work a bit harder to condition your pet bird. Try exposing it to the cause of the fear from a distance, far enough away for the object to not be considered a threat. Then steadily move it closer as time goes on. In every milestone, give the bird some positive reinforcement like a praise or a treat in order to help it associate the object with good things instead of fear.

African Grey bite can be territorial creatures that value their personal space. In the wild, they can be fiercely protective of their young and their nests, and this could translate into their behavior in captivity too.

Since being protective of its personal space is innate, there really isn’t much you can do to change that, and nor should you. Instead, respect your African Grey’s need to have its own space. You could consider getting it a spacious cage that allows you to change its food and water from the outside. Additionally, refrain from reaching into the cage to take the African Grey out; they may learn to associate your hands to aggression and invasiveness. Instead, use a stick to coax and help it out of its cage, or simply wait for it to come to that decision itself.

Mood swings caused by hormonal changes aren’t an exclusive human experience. Animals go through it too! Your African Grey may become as moody and irritable as a stereotypical teenager during its molting periods or breeding season, causing it to bite.

Just like in human teenagers, a moody African Grey parrot is best handled by giving it the space and respect it needs. If your African Grey bite doesn’t want attention, then leave it alone and don’t force interactions lest you lose its trust. If it wants your attention, then talk nicely to it and give it treats. Remember: reward good behavior, but don’t punish your pet for something it cannot control.


How to Stop Your Parrot from Biting

Take the time to understand your African Grey bite and its personality. Study its body language and try to figure out what triggers the biting response. Not everyone can be a natural at bird taming, but given enough time, effort, and training, they can learn the skills needed in order to effectively handle a pet bird.

Do Parrots Get Scared?

Why Does My African Grey do Feather Plucking?