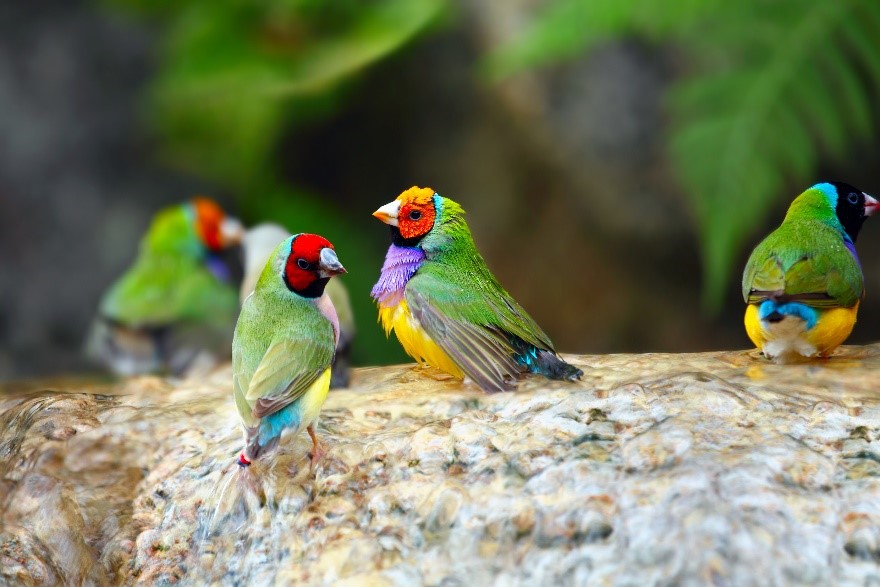 If you think that breeding your finches sounds like a great idea you may be glad to know that many finch species breed readily in captivity without any prompting. In order to increase the chances of your finches breeding, take a moment to learn the basics about bird breeding in general. In this section you will receive some basic information about finch breeding including tips for telling the sexes apart as well as information about courtship behavior and nest building behavior exhibited by finch species.

In order to be successful in breeding finches you need to pair a male and a female of the same species together. If you are new to bird keeping, you may be concerned about the challenge of telling males apart from females. For the most part, however, finches are sexually dimorphic – this means that there are significant physical differences between the sexes. The Gouldian Finch and the Strawberry finches are two examples of sexually dimorphic species. In many cases, male finches are more brightly colored than females. Male finches also tend to sing more than females – females may chirp and cheep, but they do not exhibit the same singing ability as a male finch.

Though many finch species are sexually dimorphic, sometimes these differences only become apparent during the breeding season. For example, the Strawberry Finch cock looks very similar to the hen except during the breeding season when his colors brighten. It is also important to note that there are some sexually monomorphic finch species as well – species that do not show any significant physical differences between the sexes. This is true of Society Finches, Spice Finches, and Owl Finches. In cases like this you may need to study the singing habits of the finches to tell the sexes apart.

In most cases, male finches become sexually active earlier than females do. In the wild, this gives the male finch time to find a suitable nesting site before he starts working to attract a mate. Male finches engage in a number of courtship behaviors to attract a female finch, generally aiming for a finch of the same species. In captivity, however, it is not uncommon for male finches to court females of different species. It also sometimes happens that the female makes the first move, encouraging the male finch to sing to her – this happens with Star Finches.

When it comes to courtship behavior, the male finch usually exhibits a combination of song and dance. Different species exhibit slightly different courtship behaviors. Finches that dance while they sing incorporate a variety of movements including bowing, hopping, shaking the head, puffing out the chest, and standing tall. If the female accepts the advances of the male, you will notice signs of pair bond formation such as sleeping or perching together – the pair may also be seen preening or grooming each other.

In the wild, the breeding season for finches begins in the spring, though many finches breed freely in captivity. In the wild, male finches may begin to prepare for breeding a few weeks before the females as winter is just ending. If you keep a male and female canary together, the male may start to chase the female around the cage at this time. You may need to keep a close eye on your finches at this point because the male can become aggressive. In many cases, however, it is recommended that you condition the sexes separately before introducing them for breeding.

To condition your finches for breeding, you will need to feed them a high-protein diet. Female finches will also need some extra calcium in their diet to help with egg formation. As you condition your finches, look for signs that they are ready to mate. In female finches, building a nest is the best indicator that she is ready to breed. For males, courtship behavior may include feeding the female and “kissing” her. If the sexes are separated, the male may make visual displays in addition to singing. You will know that the two are ready to mate when the female acknowledges the displays of the male – she will indicate this by crouching down to allow mating to occur.

If you plan to breed your finches, it is best to keep them in separate cages until they are both ready for breeding. In females, the sign that she is ready for breeding is that she will build a nest. For the best results, you should house the female in the cage you want to use as your breeding cage so you do not have to move her or the nest after it has been built. The ideal dimensions for a finch breeding cage are 18x11x14 inches (46x28x36 cm). Provide the female with a wicker or wooden nesting box and a pan of nesting materials. Recommended nesting materials include soft wood shavings, small twigs, and other soft bedding materials.