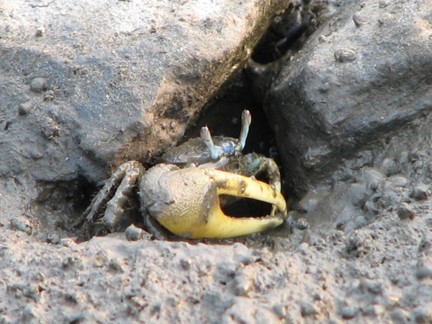 Fiddler crabs are diurnal and are active beings during the day. They spend their most of their time foraging for food to feed them. The rest of the time is spent burrowing deep tunnels and getting the attention of the ladies. The burrow is an important aspect of the fiddler crab’s day as it is vital to their daily grind since the mouth of the burrow is where they would usually find their sustenance. The burrow is where the fiddler crabs secrets away to rest when night falls.

Another reason for the burrow is to prepare for a place where the male fiddler woos and mates with a female fiddler. While many fiddler crabs and lay in wait for a female to wander into the nest so they can mate with it, there are other species of fiddler crabs who have a different method of courtship.

Some of these crabs would make and prepare a burrow and would stand outside of the burrow’s mouth waiting for a female to go in first before they follow. Researchers who had been extensively been researching fiddler crabs suppose that this is done because of the stiff competition between males to get the attention of the females. Females who go into the burrow first increase the chances of the male fiddlers mating successfully with the female; the males would stand by the mouth of the tunnel and wave their big claw to attract the attention of the female.

The premise that if the female enters first, the male is able to trap them with no way out once they have the female in the burrow. The male who coerces the female in would follow the female shortly and plug up the entrance of the tunnel. Males face a complicated courtship with females because of the competition around them. A female may have to choose from up to 20 male fiddlers before they make their choice. The females pick their partners based on multiple factors which include the male’s size, the coloration of the claw and the ability to wave the claw during courtship.

Typically, once male gets the attention of the female, the male enters the burrow first and the female, if enticed by what she sees, will follow. However, sometimes, the male courting a female would step aside. The thinking of researches on this strategy of the males is that once the female is inside, the likelihood of a successful mating is higher. It has also been suggested that females who enter the burrow first were likelier to lay eggs than females who entered after the males.

Housing and Introducing Your Pet Mouse

How Does the Barking Spider Survive?