Home » Caique Parrot Care » Do You Want to be a Caique Breeder?

Do You Want to be a Caique Breeder? 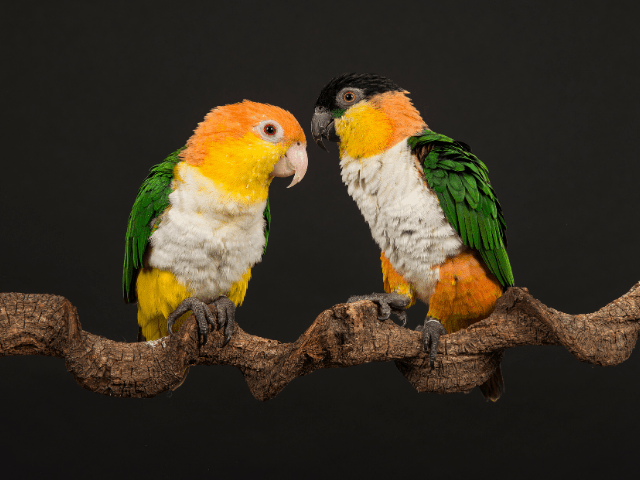 Do you want to be a caique breeder? Make sure that the facilities provided for the caique birds you take in are suitable facilities that would induce proper mating and nesting. Given the proper lighting, heating and environmental conditions, caique birds can in fact mate all year round.

Your caique birds are some of the most inquisitive sorts of parrots and if they get too curious about the rust build up, they may start chipping away at this; and unknowingly ingest toxic paint chips, corroded metals and bits of the cage debris. Be sure to set them up in a proper cage that would not deteriorate so easily or wear out too soon. Make an investment on the enclosures of your birds as this is something they will be using for a long time to come.

Do you want to be a caique breeder? A caique parrot hen will look heavy and swollen in its vent region just shortly before it lays its eggs. You can also tell that a caique hen is ready to lay her clutch when you see massive droppings. The average number of eggs a caique hen would be anywhere from three to four eggs at a time. However, do not be surprised if you find five or six eggs, because that is a probability; the female caique parrot will typically lay an egg every three days until the female has laid the whole lot.

Caique hens will  It could take a couple of tries for a new breeding pair to get a proper clutch lain, so it is also important for you to know that there would be possibilities of the caique hen to push out transparent eggs; before actual fertile eggs are produced and chicks are hatched.

Do you want to be a caique breeder? Be aware and know that if a mating pair is inexperienced, they may ultimately damage and destroy their own eggs; or even their chicks. An instance that may bring about this destructive behaviour toward their offspring could be a squabble between the mating pair that may cause destruction to the laid egg.

When an egg has been damaged, the caique birds may eat the the damaged egg to keep the nesting box clean. Should you notice the caique birds deliberately destroying their yield of eggs, you want to pull a quick switch-a-roo and replace the real egg with a wooden or ceramic egg. The destructive parental pair, once they realize that the eggs can’t be destroyed will eventually settle down and do the needful. However, if the destruction of eggs continues, you will have to do some investigative work to figure out which of the two is the culprit. Should you determine the male caique to be the destroyer, you will have to remove it from the cage, the night before the next egg is laid.

Do you want to be a caique breeder? Once the hen lays the next egg, be sure to retrieve the egg and replace it with the ceramic or wooden “dummy-egg”. There is little you can do but attempt to retrieve a newly laid egg, if you discover the caique hen to be the culprit of the destruction. If it is indeed the female caique causing the egg breakage, then make sure that you are on-hand to watch out for the next egg to be laid and replace it immediately with a dummy-egg.

Do you want to be a caique breeder? Should the mating pair of caique parrots be the rowdy sort, then, make sure that you remove and replace the real eggs with the ceramic dummy eggs. Move the newly laid eggs to another enclosure where a nesting pair of caique birds can foster the eggs removed from the rowdy pair’s box. Replace the eggs you removed with transparent or infertile eggs that another pair produced.

The reasoning for this is that you will need to determine who the source of the destruction of eggs is. Again, an inexperienced pair can destroy their clutch a few times before they settle down and start nesting correctly.

Do you want to be a caique breeder? The period of incubation for caique birds is around twenty to twenty five days. There are some caique hens that will stay put and sit tight shortly after laying the initial egg. There can be a wide margin between the oldest and youngest chicks especially in a large clutch. It is important that you have been apprenticing with an experienced caique breeder; in order to know what to expect when expecting.

With the proper equipment, which is a candling light, a trained eye can usually observe the eggs fertility five days after the incubation period starts. The caique hen will only exit the nesting box to defecate and would spend most of her time tending to incubate her eggs. The male caique plays quite the role of the expectant father during this period; helping nourish its partner by feeding her through the nesting box hole. It is not unusual for the male to take their turn in incubating the eggs, and can be quite a sight to see; another endearing characteristic of the caique bird.

Do you want to be a caique breeder? The rise of bird population in avian sanctuaries; and the mushrooming of these sanctuaries is evidence of people giving up birds due to uninformed decisions; and misinformation about the health and, more importantly; the care of these birds. This is why it is it is important that anyone intending to acquire and raise a pet; understand that there are responsibilities that trail after taking care of any animal. It is also vital that the pet you decide to take in is not an animal that is listed as endangered or near endangerment.

More and more parrot’s species are coming dangerously close to being endangered. With illegal poaching so prevalent and eager to make a quick buck; the problem of illegal captures of animals in the wild has become more and more of a concern to conservationist. Recently, even parrot species who are not endangered of extinction; has been given protection by local and international animal welfare agencies; like the Convention on International Trade in Endangered Species of Wild Fauna and Flora or CITES, to avert the possible wiping out of these parrots species.

No to Illegal Capture

Do you want to be a caique breeder? Any potential buyer; and would-be parrot carer will have to abide to a set of rules and follow regulations in order to stave off the increased illegal capture of close to endangered; and endangered parrot’s species from entering the pet trade market of the US. Purchasing parrots is not illegal; but there are rules to be observed as to how these birds are obtained, how they are transported; the papers a potential owner would need to justify the proper collection of the bird, etc.

Determine the national laws of your home country and figure out what they state about purchasing, shipping, raising; and breeding of parrots. Familiarize yourself with existing regulations to avoid any problems that may arise later on. Owning and breeding parrots are different from one country to the next, so do not assume anything. Be proactive and determine the truth.

It is advised that parrot owners and breeders provide their breeding birds with individual identification. Identifiable markings, like leg-bands and tattoos are a common practice to give identification to the bird; in the event it gets lost or if it flies out the window; doing so will also be convenient for the continued update of the genealogical and medical documents of the bird. Upstanding breeders of birds and parrots provide their young birds an identifying leg band. Closed leg bands are ideal to determine identification of a lost bird.

Do you want to be a caique breeder? Alternatively, implanted microchips under the bird’s skin or muscle is also one other reliable; and less obvious means to identify the bird. It may be an uncomfortable procedure at first (more for the bird than you) but it will serve the bird; and you better in the long run. Aside from the two previous options; a bird can also be given a tattoo marking as a form of identifying the bird. However, be aware that the tattoo can (and probably will) fade over time. Bird footprints are also used as a tool to identify birds.

There are no laws against purchasing; owning or breeding caique birds in the United States and caique birds are thankfully not listed as an endangered species in any of the animal welfare agencies around the world. But it is still your responsibility to figure these details out before making the jump on purchasing and raising a caique parrot.

How to Spot a Healthy Caique

How to Feed Scraps to Caique Parrots?