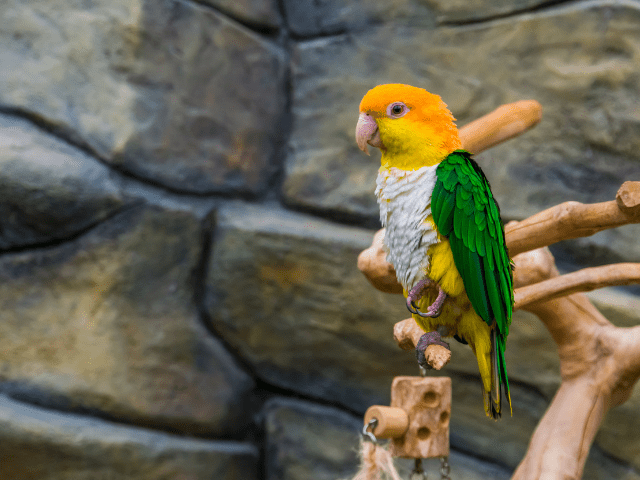 What are Caique breeding techniques? If you are planning on getting a mating pair, a male and female that is, it is best that you get them from one place where they have initially been seen to bond. It takes at least two years for a caique parrot to mature and only then can they start mating. A breeder of birds would usually have the information on the bird’s gender through DNA testing or an endoscopy. However, carrying out these procedures too early on could result in a false identification of gender. It is best to wait to sex the birds until such time they reach near maturity.

How to Find a Mate

Possibly the most challenging aspect of breeding caiques would be finding the right mating pair. Caiques are choosy when it comes to the partners they pick. They don’t like being forced on one another and prefers to take their own time when singling out their match. Be aware that black-headed caiques in particular can become agitated when forced to mate with another one of their sort.

In order to increase the chances of birds finding their mates, procure at least 4-5 birds of each gender.  Make provisions for small separate cages which you want to set side by side. You want to observe how they relate and get along, or otherwise, with each other. When you observe a pair gravitate toward each other, you may have founnd your pair!

What are Caique breeding techniques? You can then proceed to place both of the birds in a bigger enclosure. Make sure that you do this at a time when you are free to observe and supervise the initial union, throughout the following days. If this pairing goes of without aggression or fighting, then you should be fine. Allow the birds to settle in and get to know each other in close quarters. It may take them a bit of time to get used to their new mate.

What are Caique breeding techniques? Pay mind when you buy pairs that breed. Make sure that you get all the details of the birds including and importantly, the history of the hen. Determine that the hen has no history of devouring its eggs after it has laid them.

To be on the safe side, when it comes to breeding caiques, it is best to look for birds that are at least 3 years old. Not only would they be mature enough to mate, they would also have been exposed and socialized to mingling with other birds. Although caiques are able to breed at 2 years of age, they may not be mature enough to nest and they could potentially destroy their hatchlings.

Determine the health and wellness of the birds as these birds. Make sure that the birds are not closely related and that they are of good health. Have the birds checked with your own avian vet once you take them home. It is advised that the birds be quarantined and kept from any other birds you may have in order to decrease the chances of a sick bird passing on an illness to a healthy bird.

What are Caique breeding techniques? A caique will not need too much space to nest after a successful mating. Provide for them a small cage with dimensions of 24 high x 24 wide x 48 long. MAke sure that the cage is reinforced and that no big animals r rodents can get to the birds during nesting. A successful breeding pair would yield at least 2 clutches a year. Do not be surprised if they yield more than this in a year, because this is a possibility. If you are not looking to breed more than what you are ready for, make sure that you separate the pair.

Make sure that the birds’ sexes have been determined to avoid frustration and wasted time. DNA sexing is the best way to determine the gender of your caique birds and even that can yield false identification. To ensure that you are getting the correct gender information of the bird, wait until the bird is about 2-3 years into maturity before carrying out the test.

What are Caique breeding techniques? Place the intended pair in separate cages that is about an inch away from each other. You will then have to observe how they interact with each other. Are they cautiously curious? Do they seem to be checking each other out without aggression? Or do they seem weary and suspicious of each other? If they are showing no inclination or even hostility to each other, you will have to repeat the process of choosing another mate. If they are interacting well with each other then follow the next step;

Since all birds, especially the caique parrot, are territorial, it is best to place them in a cage that has not been used before. A new cage will be their neutral ground, where teritory has not been established, therefore giving them freer reign of exploring the new enclosure together – an ultimately, each other.

If there is no other cage to spare, then it is best that the hen is placed in the breeding box with the male being introduced later to the enclosure. Once they are in one enclosure, keep an eye out on the two of them for the next two weeks or so. Spats and squabbles are normal behaviors that caique birds display. What you want to see the birds achieve is them sitting with each other and preening each other as well. These are common signs of the birds pairing off well.

What are Caique breeding techniques? Getting a parrot entails work and responsibilities. Slacking off is just not acceptable when choosing parrots as pets, or you will otherwise end up with a mess of a house that will smell. As much as they are easy to take care of, there are specific methods one would need to follow, and have become second nature, in order for the bird to thrive and thrive well. Setting clear expectations is just the smartest thing you can do.

Some Things to Keep in Mind

What are Caique breeding techniques? First off, we need to remember that taking in any animal has their drawbacks and risks. Parrots are no different. Whether large or small, parrots are ultimately animals of the wild and even the tamest parrot can inflict unintentional injury to people.

In the wild they use their claws and beaks as a defense mechanism to ward of injury to self or possible, impending predation. In captivity, injury, accidental or otherwise, can occur if a bird is handled roughly, when it is startled or if it itself gets hurt or attacked.

What are Caique breeding techniques? An avian vet is a specialty; therefore, their fees do not come cheap. Since a child does not earn a living, it will largely be on you to get expenses sorted out. You will have to be thoughtful about taking on any sort of pet, because as you may have already noticed, the responsibility of a pet will largely fall on the one who understands the weight of raising something with life.

Parrots can be a lot of work. For something so small – a lot smaller than your tiny child – they can also take up quite a bit of space. Birds are naturally messy eaters, and drinkers, making jobs of cleaning up a little more routine since cleaning does need to be done on a daily basis. A kept cage is a healthy cage.

Most bird ailments stem from unkempt cages and soiled food and water. Should your little tyke be asking for a parrot, its best that you sit them down and talk to them about the responsibilities of cleaning up after the birds, as well as feeding and hydrating the little flyers.

What are Caique breeding techniques? Parrots need large enclosures where they can fly and hop about in and these cages will surely get its share of grime and dirt on an everyday occurrence. Making sure that your child is old enough to take on some of the responsibilities will not only mold the child to proper and responsible pet care, they would also be made aware of the job which entails being owner of a pet. If your child is not old enough to take care of one part of the time, then make sure that you are willing to pick up the slack. The decision on whether the child is ready for the responsibility of owning a pet will fall on you. You taking the time out today to research on the caique parrot, whether for your child or yourself, are a truly good way to start off your journey taking in a caique bird

Do You Want to be a Caique Breeder?