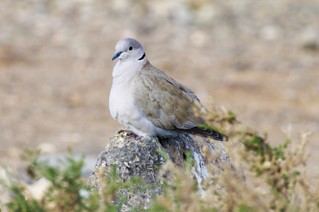 Although it is recommended that owners learn their birds’ “language” and coo back at them in the name of companionship, it will soon be quiet clear to you that your dove regards you as rather slow in the communication department!

In order to get your attention so you can resolve whatever is bothering the bird, your doves may resort to a level of communication they think you are more suited to understand. For instance, a dove trying to get his point across:

This may be the dove’s way of saying he’s hungry, his water needs changing, he wants more nesting material, or he’s feeling neglected.

People often say they wish their pets could speak English because it would be so much easier to know exactly what the animal wants or needs instead of trying to guess. Imagine the dove’s frustration! There he is, “speaking” perfectly coherent “dove” to a thickheaded human who is just not getting the message!

Remember that all doves are individuals and each one will have a unique vocabulary. That being said, these are some of the sounds you are most likely to hear.

Very young doves also peep, which can best be described as a long series of short, fast, high-pitched vocalizations, often to indicate distress. This may signal anxiety over locating the parent or signal that the baby is hungery.