Home » capybara capybaras animal » What Are Some Interesting Facts About the Tomato Frog?

What Are Some Interesting Facts About the Tomato Frog? 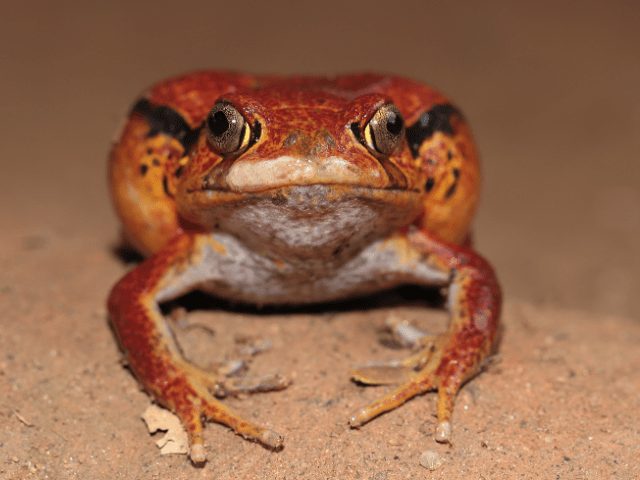 If you have, or are thinking of keeping, a Tomato Frog as a pet; what better way to truly appreciate the uniqueness of your pet frog than knowing more about what makes them unique as a species?

Below are five unique and interesting facts about the distinctive and beautiful Tomato Frog.

The Tomato Frog is endemic to Madagascar, more particularly located in or around the town of Maroantsetra; which, fittingly, is often referred to as the “tomato frog village.” It wasn’t a tomato frog that was featured in the cartoon series Penguins of Madagascar, but a Poison Dart Frog named Barry. But then there is a lot to choose from. Did you know that there are around 311 species of frogs identified in Madagascar, and several hundred more that yet remain to be identified? Even more interesting is the fact that the entire amphibian population in Madagascar is made up exclusively of frogs. That means there are no toads, salamanders, or newts.

What’s the difference between a toad and a frog, you might ask? In general terms, frogs have smooth skins that are covered in mucus. Toads have thicker and rougher skins. So, if you do find yourself visiting Madagascar someday, you won’t find many of the plump, thick-bellied toad; but you’ll probably find plenty of frogs.

Why is the amphibian population in Madagascar made up exclusively of frogs? Well, we don’t know. We do know that it is a unique ecological balance that exceptionally fits Madagascar’s ecosystem; so introducing other types of amphibians is a big No. Even so, there are some 85 frog species in Madagascar that are already endangered; or potentially endangered, by extinction, and rather unfortunately; that list includes the beautiful Tomato Frog, which is now classified as Near Threatened.

Tomato Frogs are appropriately called because of the vibrant, orange-reddish color that makes them look like a big ripe tomato. But did you know that there are actually three different species of Tomato Frogs?

The species that we most identify as the Tomato Frog because of its unique coloring; or the Dyscophus antongilii, is the species that is classified as Near Threatened. Aside from the gradual decline of its natural habitat and pollution, these frogs have become pretty popular as pets. Over-collection for the pet trade has greatly reduced the number of this species in its natural environment.

Interestingly, the two other species of Tomato Frogs; which are nowhere near being classified as a threatened species, are a lot less distinctive in their coloration. The Dyscophus guinetiis primarily yellowish in color, although the female of the species are red-orange. The Dyscophus insularis, on the other hand, is brown-greyish in color. It makes you think that the difference in the numbers of the three species of Tomato Frogs; and their threatened status; has a lot to do with how attractive they are in the pet market rather than the more common environmental factors of pollution; and deforestation. In fact, the difference in the coloration of these two species to the more popular image that people have of what a Tomato Frog looks like have prompted people to refer to these other two species as “false tomato frogs.”

You can hold them in the palm of your hand

The females of the species are generally larger and more brightly colored than the males. The females, in fact, can be twice as large as the males. Where males can grow to reach about 2.5 inches, the females can reach up to 4 inches long. All things considered, that is not very large, and the size seems perfectly fitted to an adult-sized palm. Add to that the fact that the adults of the species tend to grow a bit more rounded; and rotund compared to the slimmer juveniles, so it would almost be comparable to holding a tennis ball in your hand.

But while the size and rounded feature of the Tomato Frog might make it tempting to hold them in your hand; most frogs, including the Tomato Frog, don’t really like to be handled. They might tolerate it; if they have become familiar with you as their owner and you keep the touching to a minimum; but they will never like it. This is because the frog’s skin is quite absorbent – they literally drink and absorb oxygen through their skin. That means that they could just as easily absorb the oils, sweat; and other substances we have in our skin and on our hands. Washing your hands with soap; and disinfecting before handling one of these creatures will probably not make much of a difference to them either way. If anything, the chemicals from the soaps and other cleaning and disinfecting solutions you’ve used will be much more harmful to them.

When we think of frogs, we usually think of them gracefully leaping from branch to branch of the trees near or around ponds or swamps. Tomato Frogs, on the other hand, are terrestrial, which means that they live primarily on the ground. Many of the residents of Maroantsetra in Madagascar; where Tomato Frogs are more commonly found, often see this frog species out in their backyards or gardens.

The Tomato Frog is particularly adapted to living on solid ground. It knows how to burrow into the ground, where it prefers muddy or sandy soil. From the unique vantage point of where it hides beneath the leaves and the mud; it sits and waits in ambush for its prey. Of course, being amphibians; the Tomato Frog still prefers locations that offer a source of fresh water such as swamps, ponds; or other stagnant waterways in order to keep from drying out. Interestingly, though, the Tomato Frogs are not very good swimmers. And yes, they can actually drown!

Most frogs are carnivorous, and the Tomato Frog is no different. While they subsist primarily on a diet of small insects and bugs such as crickets, insect larvae, and worms, occasionally; and if they are large enough, they can even eat mice!

From where they sit in ambush, buried under mud or piles of leaves; the Tomato Frog can sit still, unmoving for quite some time until their prey passes by. Then, much like the feeding behavior of other frogs; they catch their prey by flicking out their sticky tongue, and the caught insect is then swallowed with the help of the pressure of their eyeballs; which the frog pushes down in their sockets. This is why you often see frogs swallowing their food seemingly looking like they are turning up their eyes in satisfaction; as they gulp down their dinner.

But living on the ground as a terrestrial frog does have its challenges, too. For the Tomato Frog, in particular, their natural predator is the ground-hugging snake. This frog species does have its manner; and method of defending itself against the hungry snake, not the least of which is its ability to sit still; and unmoving for long periods of time to evade the notice of predators, but should they be caught off guard, which does happen, the Tomato Frog can be swallowed just as quickly as it swallows its own unsuspecting meal.

Among its various defense mechanisms, the unique color of the Tomato Frog helps to ward off predators. The unique tomato-like color of the Tomato Frog that makes them; so attractive to humans to keep as pets is actually one of its primary defense mechanisms against predators. Its bright, orange-red coloration is a signal to other animals that it is not very good to eat; perhaps even inedible.

On the other hand, the Tomato Frog can also inflate its body; thereby making it look threatening and intimidating to other animals. Should a predator like a snake, or any other larger animals (including humans) pose a threat to the Tree Frog, not only will it inflate its body, it will also begin secreting a thick, sticky; white mucus that can cause numbness. The effects of this substance is pretty immediate, and can often last for several days. A snake with its mouth clamped on the Tomato Frog fighting for its life might suddenly find that it is unable to move or feel its mouth and even eyes. This can cause them to let go of their prey, and the Tomato Frog can then scamper to safety.

They Are Not Poisonous

The good news is that the toxins secreted by the Tomato Frog is not so poisonous as to be lethal to humans, although it can cause some allergic reaction. It is also not a constant on the frog’s skin but is produced only in situations where the animal feels threatened. So, you might pass a Tomato Frog hiding, unmoving, under a pile of leaves, and you might even touch one unknowingly.

Unless the Tomato Frog felt threatened enough to call out its defenses, you likely won’t have anything to worry about in terms of the effect of its defensive toxins. If you have a Tomato Frog as a pet, you probably won’t have anything to worry about from touching their skin either, unless they had reason to feel threatened. But you should probably also keep in mind that unlike most mammals, amphibians like the Tomato Frog don’t often like being physical touched or handled.

Pros and Cons of Caring for a Tomato Frog

How Can I Build a Frog Pond?